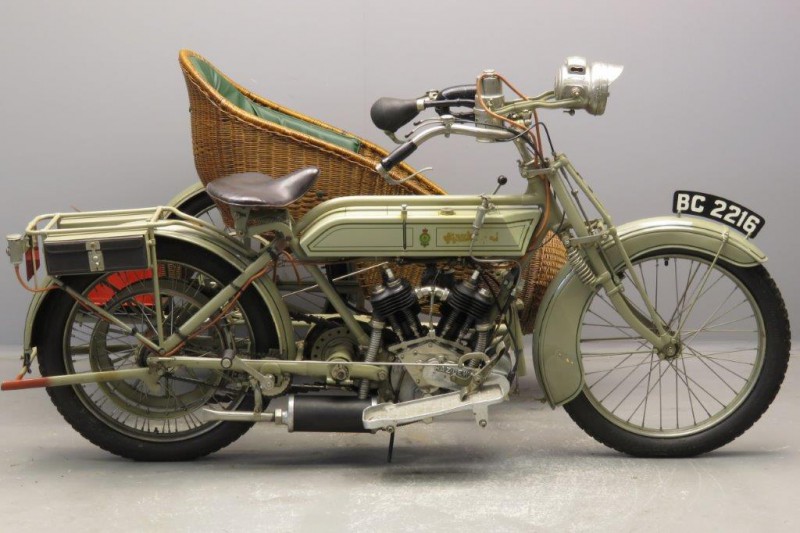 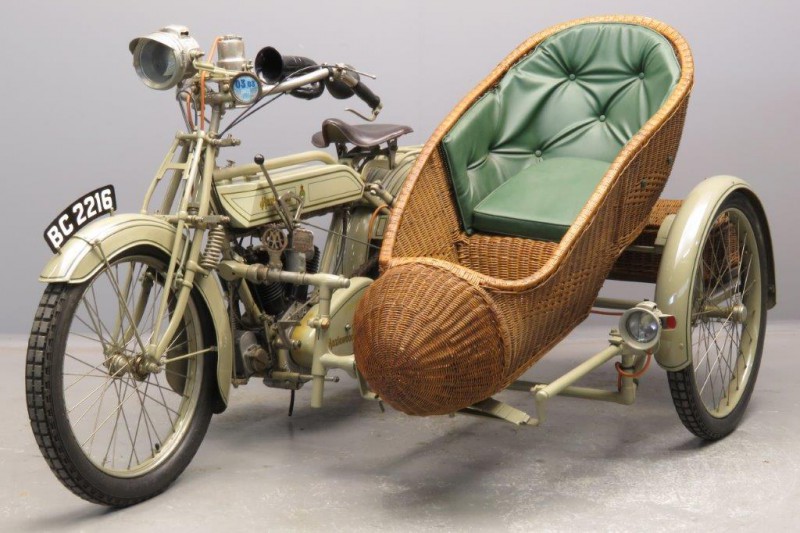 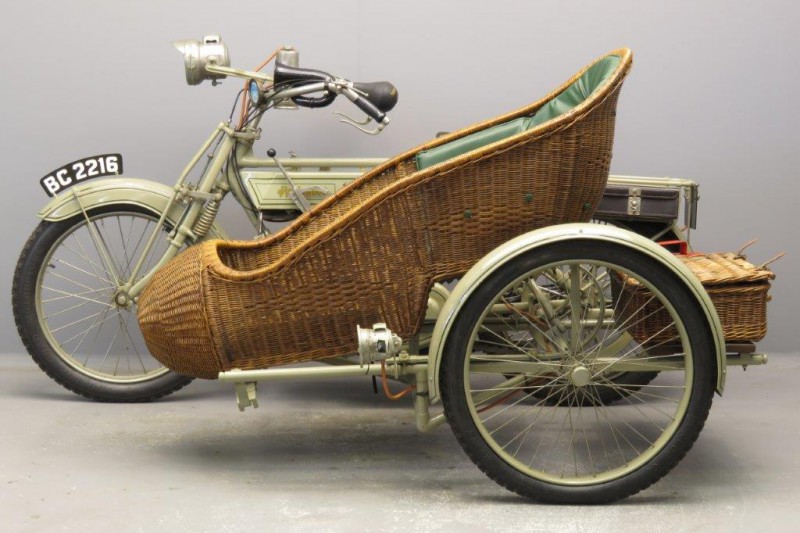 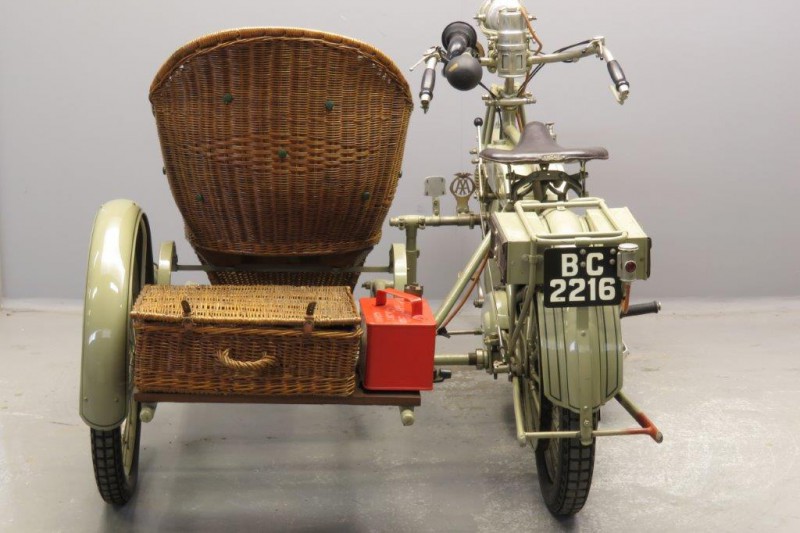 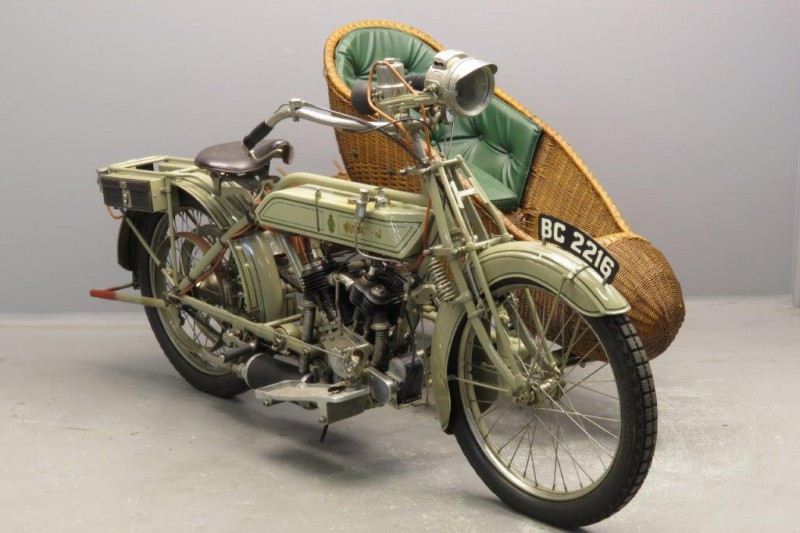 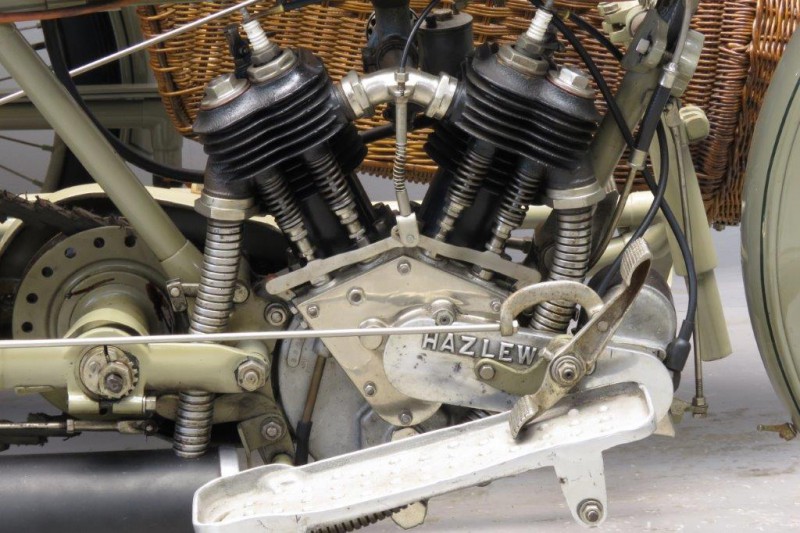 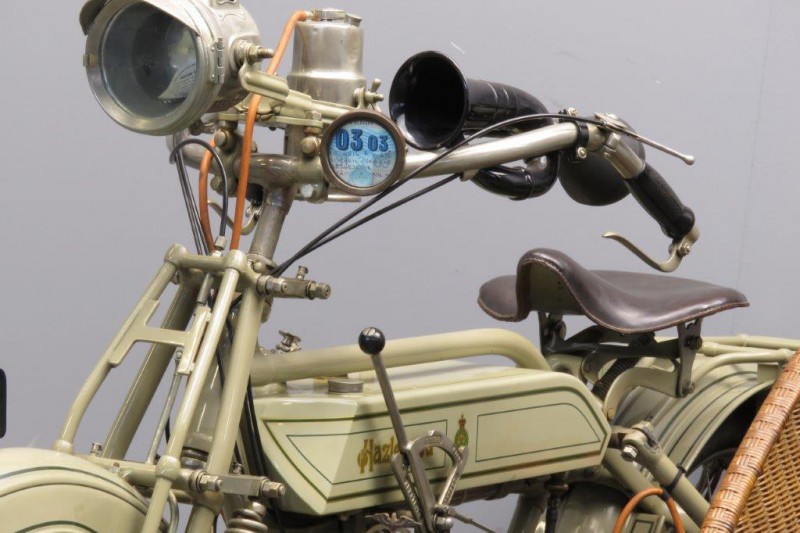 James Hazlewood started making bicycles at Bishopsgate Green, Foleshill in Coventry from 1876 as The Hazlewood Cycle Company.
In about 1905 the business started making sidecars for motorcycles.
In 1911 they launched their own Hazlewood motorcycle built in Albion Mills, West Orchard, Coventry.
There were different engine options, all of them using single cylinder or V-twin engines supplied by J.A. Prestwich.
The most popular model used the J.A.P. 5-6 horsepower V-twin engine (70 mm bore, 85 mm stroke).
This type of engine being supplied by J.A. Prestwich to several manufacturers as being well suited to sidecar work (but also providing a powerful solo motorcycle).
Gearing was provided by a three speed Armstrong rear hub, similar to the three speed hub gear used on their bicycles, which they continued to build.
During the 1914-1918 war Hazlewoods had to suspend motorcycle production “being engaged in munitions of war”.
The company went out of business in the 1920s.
This rare Hazlewood v-twin comes with a copy of Veteran and Vintage Magazine (March 1973 edition) recounting its history from new when it was purchased in 1915 from Walter Baines’ shop in Belgrave Gate, Leicester by one George Bennett, a 30-year old racing cyclist.
The motorcycle had stood in the window of Baines’ shop for some time, presumably because it was expensive and difficult to sell.
George Bennett transferred the wicker sidecar from his 1912 Triumph to the Hazlewood shortly after purchase.
During the war years the combination changed hands a few times (the petrol rationing made it difficult for motorcycles to be used) until it came in the possession of a Mr. Jesson of Whetstone in 1917.
There it stayed till 1964 when his property was sold. By that time the wicker sidecar body had been burnt because of woodworm infestation.
In the 1970’s the machine underwent a full restoration and was fitted with a new wicker sidecar body.
In the 1990s the combination was refurbished again as evidenced by a selection of colour photographs on file.
This practical veteran combination comes complete with Lucas acetylene lighting, comfortable XL-all saddle and Pioneer Certificate.