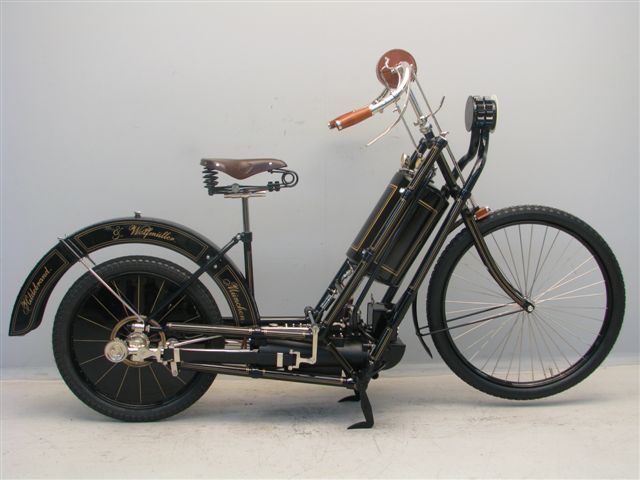 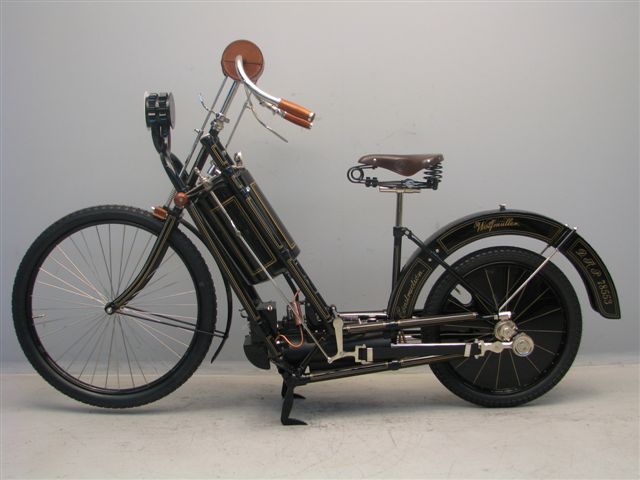 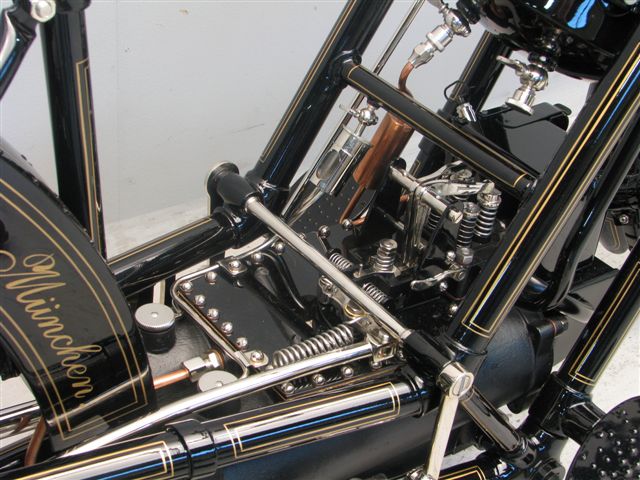 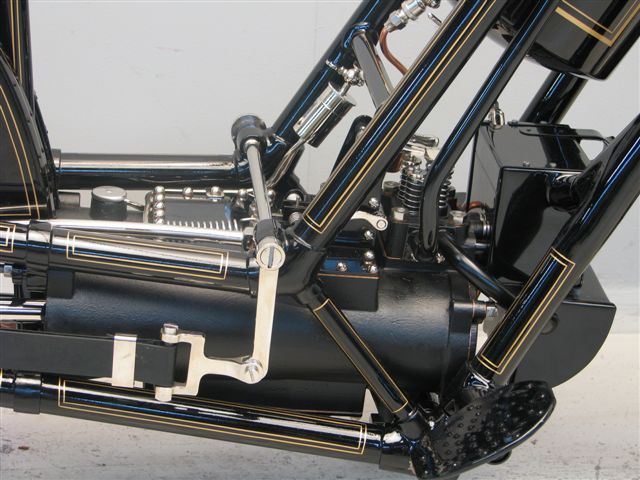 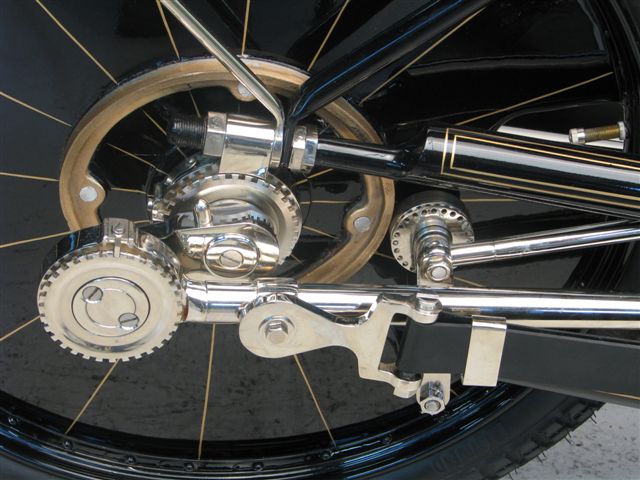 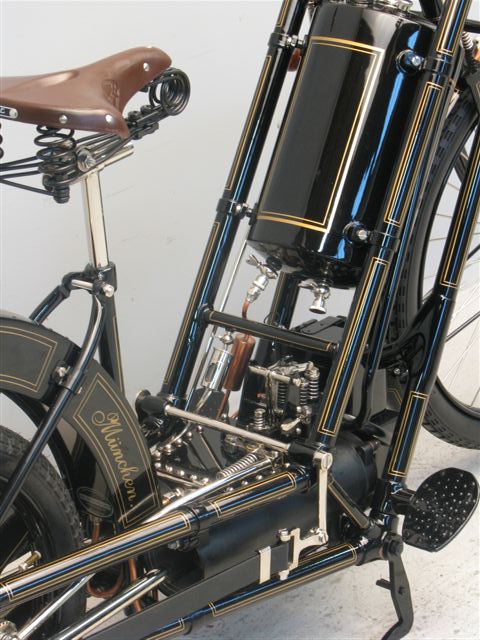 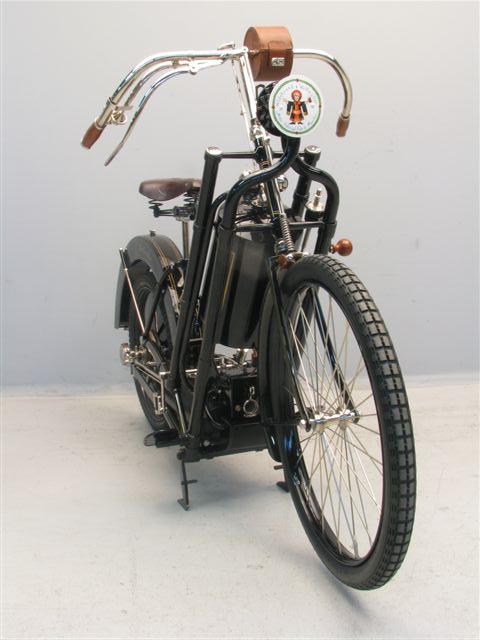 There had been steam-driven ‘boneshakers’ on both sides of the Atlantic in the 1860s and, of course, Gottlieb Daimler’s gasoline-engined Einspur of 1885, but the Hildebrand & Wolfmüller was the first powered two-wheeler to enter series production; indeed, it is the first such device to which the name ‘motorcycle’ (motorrad in German) was ever applied.
(Although a true motorcycle, Daimler’s was only ever intended as a test-bed for his high-revving internal combustion engine, and as soon as that was powerful enough he turned his attention to automobiles).

Like many of their contemporaries, the Hildebrand brothers, Henry and Wilhelm, began by experimenting with steam power before turning to a (two-stroke) gasoline engine, the latter having been developed in partnership with Alois Wolfmüller and his mechanic, Hans Geisenhof. The quartet’s next design was a water-cooled, four-stroke parallel twin displacing 1,488cc, which until relatively recent times was the largest power unit ever fitted to a motorcycle.
The Hildebrands were in the cycle business so their new engine was mounted in a bicycle frame of the newly developed ‘safety’ configuration.
When this proved insufficiently robust, a more integrated arrangement was devised, based on that of the Hildebrands’ defunct steamer, and the name ‘motorrad’ registered for the new invention, which was patented in January 1894.

Steam locomotive practice was further recalled by the long connecting rods directly linking the pistons to the rear wheel, which opened and closed the mechanical exhaust valves via pushrods actuated by a cam on the hub.
The latter contained an epicyclic reduction gear and there was no crankshaft flywheel, the solid disc rear wheel serving that purpose.
Rubber bands assisted the pistons on the return stroke at low revs.
Fuel mixture was fed from the tank that also acted as a surface carburettor and thence via atmospheric inlet valves to the cylinders where it was ignited by nickel hot tube, as developed by Daimler.
The box-like rear mudguard acted as a reservoir for the engine’s cooling water, while two of the frame tubes served as the oil tank.
The tyres, manufactured under license from Dunlop by Veith in Germany, were the first of the pneumatic variety ever fitted to a motorcycle.

Although modern in many respects, the H&W was primitive in others, most notably the brakes, which consisted of a steel ‘spoon’ working on the front tyre, the application of which automatically closed the throttle.
The rider controlled the latter by means of a rotating thumbscrew; there was no clutch, which made starting an athletic procedure, the machine being pushed until it fired, whereupon its rider leapt aboard while simultaneously trying to regulate engine speed.
Despite producing only 2.5bhp at 240rpm, the H&W was capable of speeds approaching 30mph, an exciting prospect at a time when powered road transport of any sort was still a novelty.

The H&W’s announcement was greeted with considerable enthusiasm and plans drawn up to build a factory in Munich to produce it.
In the meantime, numerous small workshops manufactured parts for the machine, which was also licensed to the firm of Duncan, Superbie et Cie for manufacture at its plant in Croissy, France where it would be marketed as ‘La Petrolette’.
Six Petrolettes were exhibited at the first Paris Motor Salon held in December 1895 and by 1896 some 50-or-so had been delivered.

Despite some impressive demonstration performances by factory riders, the H&W’s shortcomings became all too apparent once deliveries to paying customers commenced.
The crudity of the hot tube ignition meant that starting was difficult and, once under way, progress was erratic because of the rear wheel’s poor flywheel effect.
Duncan, Superbie et Cie lost a court case against a dissatisfied customer, whereupon many others promptly demanded their money back. Early in 1897 both the German and French ventures collapsed.
Opinion differs with regard to how many machines were produced, figures ranging from as low as 800 to as high as 2,000 being quoted.

This 1894 Hildebrand & Wolfmüller recreation was built by a German engineer.
It is a full scale and true reproduction (one of 10) created after careful technical and historical research and inspection of the few Hildebrand & Wolfmüllers still in existence.
Virtually every component is hand made, right down to the cast-iron engine block and pistons, as no suitable existing parts could be found.
Only the tyres and saddle are readily obtainable.
Although this H&W has not been started, this replica has nearly all the necessary parts to do so.
Although ultimately a failure, the Hildebrand & Wolfmüller nevertheless deserves its place in history as the World’s first ever production motorcycle.
If Motorcycling can be said to have started anywhere in particular – it started here.
The  machine is offered with copies of some original 1895 technical drawings and a German history of the H&W (published 1986).
You can watch a short film on YouTube  http://www.youtube.com/watch?v=jbbsDds1tbU  to see a similar 1894 Hildebrand & Wolfmüller running around the block…