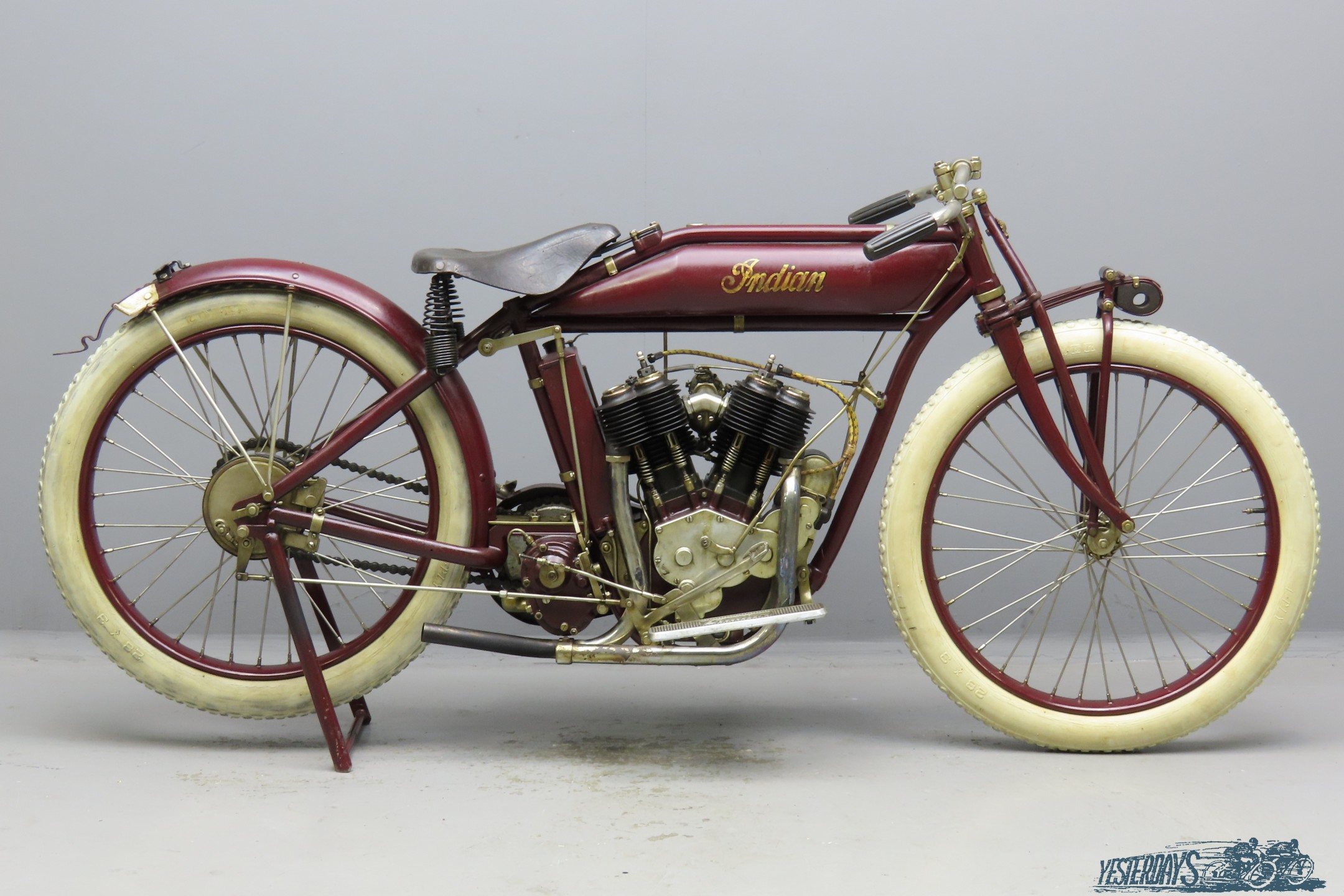 In the spring of 1915 Indian’s top management conferred with the Engineering and Design Departments on the matter of changing the basic design of Indian engines.
It was decided that the Hedstrom type had by this time undergone its maximum economical development.
It was also an expensive engine to manufacture and cutting production costs was high on the agenda of the Board of Directors.
Moreover, many amateur mechanics experienced difficulties in adjusting the rather sensitive Indian overhead valve gear because of rapid wear of the exposed inlet valve pushrods and rockers. Designer Charles Gustafson thought a well-designed side valve type could be a simplified improvement, such as the modified Peugeot V-twin he had perfected for the Reading-Standard Company, and which had subsequently undergone refinement for both enhanced reliability and economical manufacture.
Experimentation with various prototypes was immediately undertaken.
The new engine was rated at 7hp, but it actually developed 16 to 17hp on the dynamometer, a substantial increase over the last Hedstrom models.
In order not to unduly interrupt the normal flow of production, the PowerPlus engine was built with the same crankcase dimensions as the last Hedstrom type, so that it could befitted to the current frames and engine plates without major changes in the standard big twin models.
The only other modification was the fitting of a slightly improved three-speed gearbox and a somewhat heavier clutch. (source: Harry V. Sucher, “The Iron Redskin.”)
A little sidestep: there are various stories about Gustafson’s early involvement with Indian.
Harry Sucher writes that Charles joined Indian in 1907, after becoming employed in 1906 by the Reading Standard Company.
In “Franklin’s Indians” we read on page 116: “Gustafson’s employment at Hendee Mfg. Co. dated from 1903, and prior to this he’d been a bicycle repairer. Immediately before joining Indian he’d been working at George Holden’s bicycle business at 17 Dwight Street, during the time when it became the world’s first dealer of Indian motorcycles.
He’d taken a year of time-out in 1906 to join the Reading Standard company in Reading PA., then returned to Hendee Mfg. Co. to become a right-hand man of Hedstrom’s in the engineering department.
The machine we present has many unusual features; it certainly isn’t a modern contraption but it has been as it is now for many years, probably having been part of a Swiss racing motorcycle collection.
We would welcome any information on the history of this puzzling PowerPlus!
The rolling chassis is much like that of a 1915 Model D-1 “Speedway”, or in the British catalogue “Road Racer”, but the machine has a three-speed gearbox.
The Troxel saddle has a leaf-spring suspension that is mounted to the top tube with an unusual fixture.
Other non-standard items are the gear and clutch control.
Most puzzling however is the engine: at first sight the crankcases look PowerPlus but close inspection reveals that they are certainly different.
The magneto drive cover is also non-standard.
The former owner once had a Daytona racer and he observed that the crankcases and magneto drive cover looked much the ones on the racer, but were not exactly the same.
The cylinders are not the usual PowerPlus ones, but what are they? There is similarity with Reading Standard cylinders, which are said to be of higher compression than PowerPlus cylinders.
The story goes that quite a few experimental racing machines were produced every year, and that for their construction various parts from any year were used.
Might this be one of these experimental racing prototypes that Harry V.Sucher mentions and that found its way to Europe?
One thing is sure, this special PowerPlus is a good-looking machine that has been kept in excellent condition by its former owner and will be an asset to every Indian collection.