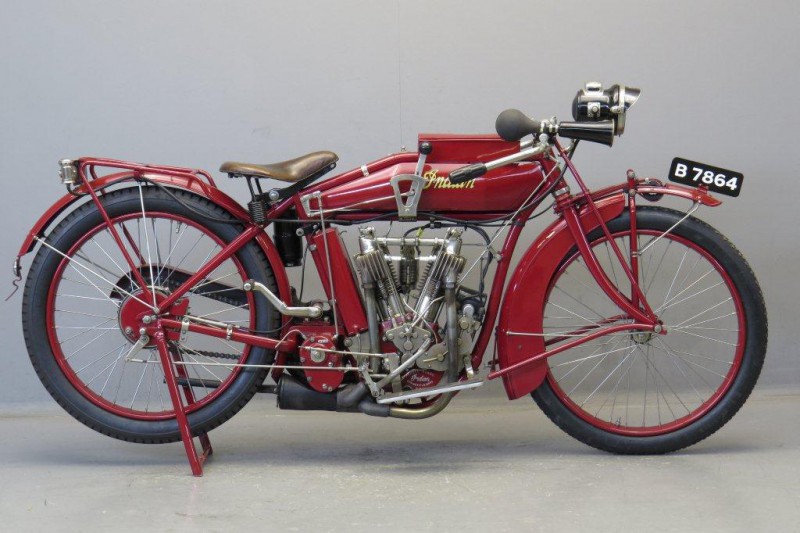 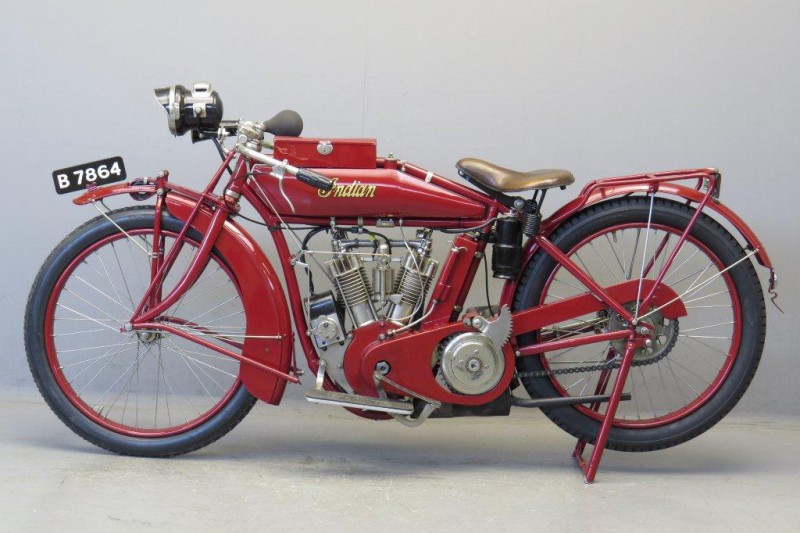 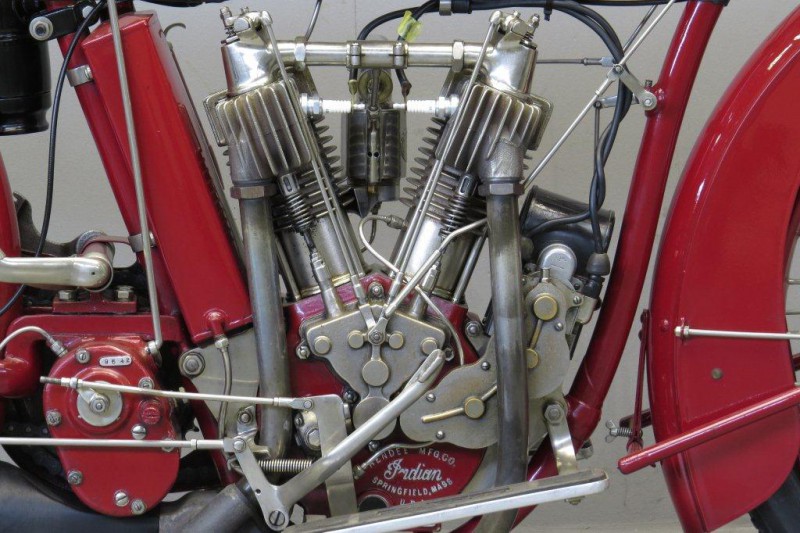 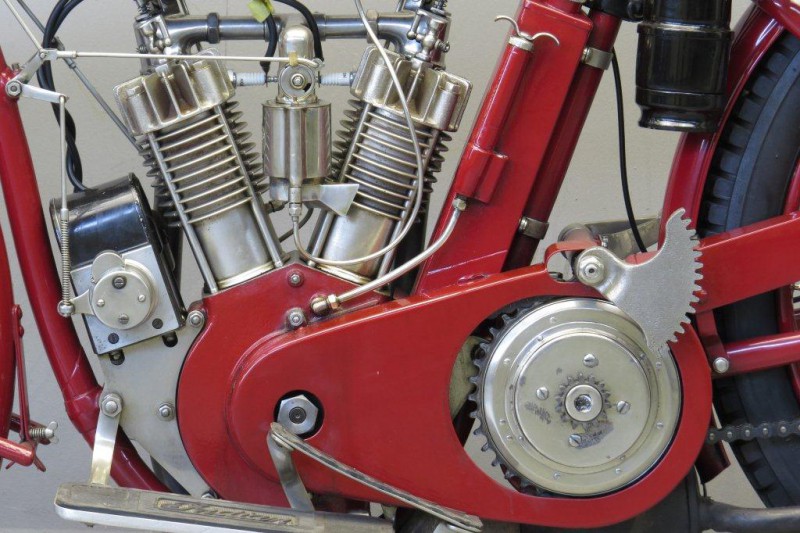 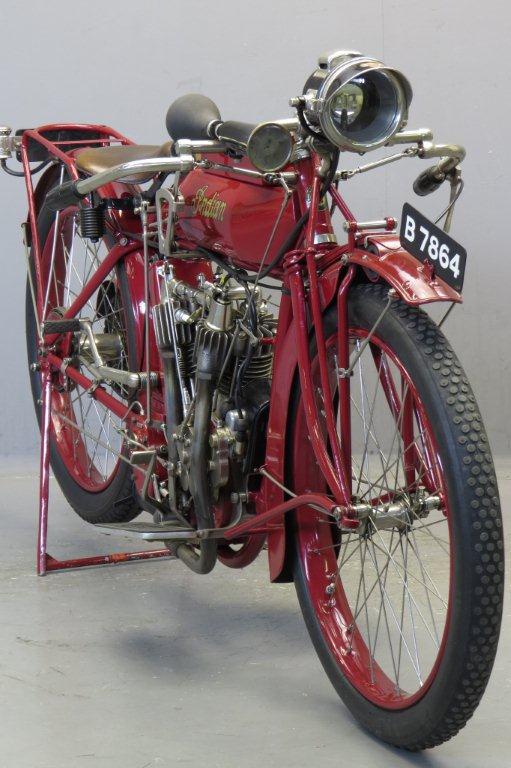 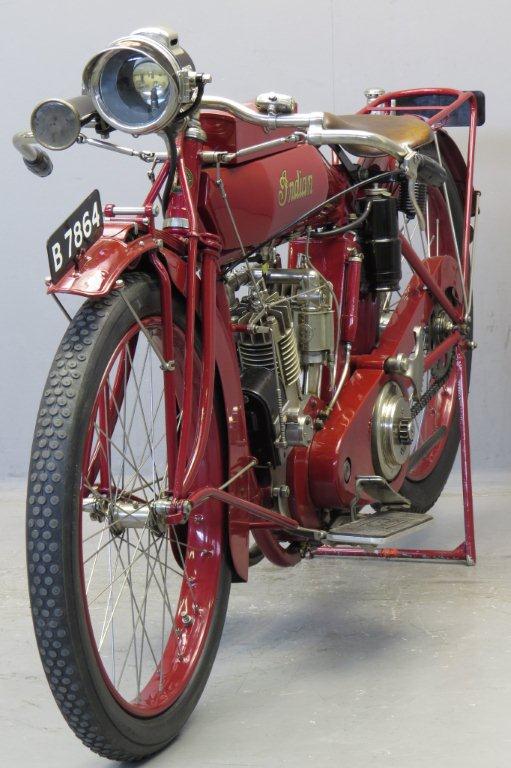 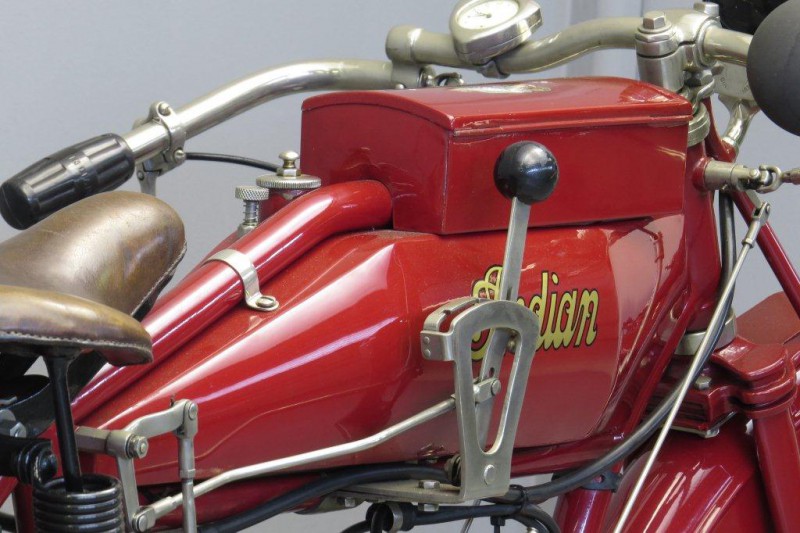 Indian’s first, 38.61ci (633cc) v-twin appeared in 1907 with an engine clearly derived from that of the single, though mechanical inlet valves – introduced for 1908 – were an early improvement.
The twin’s rear cylinder continued to form part of the frame until 1909 when a loop frame of the type favoured by rivals Harley-Davidson was adopted.
The Springfield Company’s first ‘Big Twin’ debuted that same year displacing 61 ci (988cc).
By 1913 Indian was the largest motorcycle manufacturer in the world with a production of some 35,000 machines, according to a company claim.
For 1915 two smaller v-twins were catalogued, the 3 ½ HP 498 cc Model A and the 5 HP 684 cc Model B.
That is to say, the Model A was offered only in the British Indian Catalogue, it is not listed in the standard “worldwide” Indian catalogue for 1915.
Moreover, the standard catalogue specifies three types of 5 HP Little Twin, B-1 Single- Speed, B-2 Two- Speed and B-3 Three- Speed.
In Britain only the Tree Speed Model was offered.
First registered in Lancashire, this Indian ‘Little Twin’ was sold by the son of the original owner in 1994.
His father had purchased it new in 1915 but after an unfortunate accident involving tramlines in 1918, the machine was taken off the road and put into storage.
It was restored over a period of approximately two years, the task being completed in 1996.
As the machine had seen very little use in its early life, its mechanical condition was very good and the engine needed little work, the bearings being replaced purely as a precaution.
It is a tribute to the restoration’s quality that, after 17 years of use, the Indian is still in almost the same condition as it was in 1996.
Indeed, “Little Twin” was deemed worthy of an article in the August 1998 edition of The Classic Motor Cycle magazine, appearing on both the front cover and centre spread .
The machine has also won the ‘Best Indian’ award at the Stafford Show.
Since returning to the road, the Indian has seen annual use, taking part in the Banbury Run several times and seeing action at the Isle of Man Rally and other events.
Unusual in having its kick-starter on the ‘British’ side, the Indian also features the optional ‘semi-TT’ handlebars, Miller acetylene lighting set, trademark left-hand throttle twist-grip and right-hand advance/retard twist-grip.
Transmission is the three-speed option with foot operated clutch.
Although there is no front brake, there are two at the rear: one internal-expanding and the other external-contracting.
In common with other US-made machines of the period and later, the Indian would not have had a frame number, although there is one quoted on the registration document.

This Indian 684cc “Little Twin” comes with original Indian tools together with a comprehensive history file.