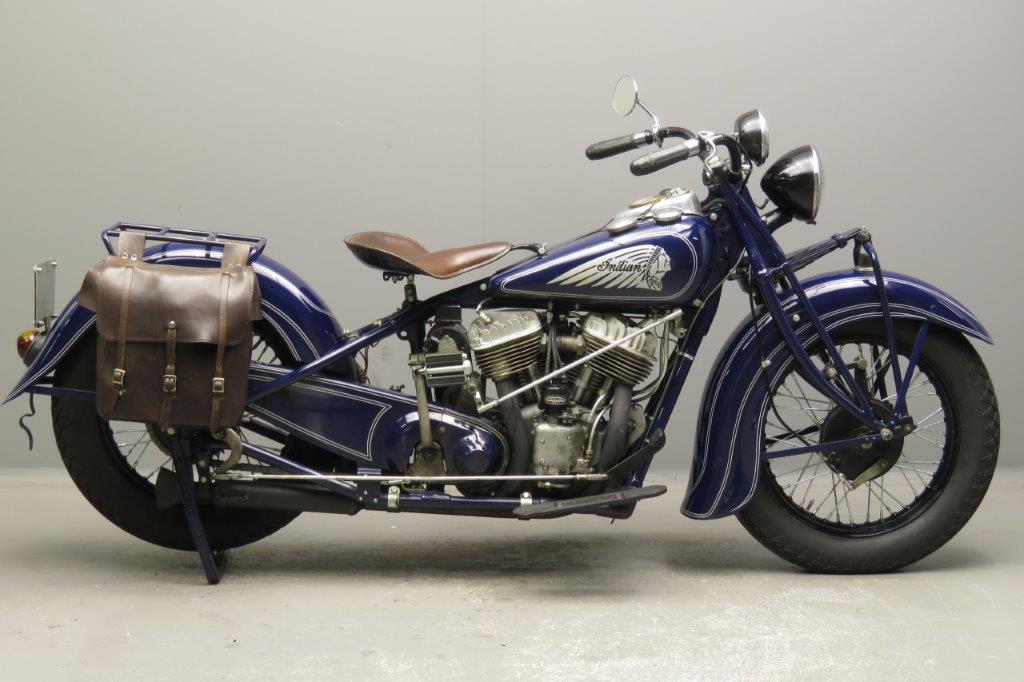 1922 saw the introduction of a wholly new Indian model with a 61cu” (1000cc) side valve engine designed by Charles Franklin.
This new model was intended to maintain Indian’s place as the largest motorcycle manufacturer in the world.
The Chief boasted the best aspects of the very popular Scout model – a full-cradle frame, helical gear primary drive, an oil-bath clutch and two-cam engine – to bring Indian completely up to date. The Chief combined excellent handling with a powerful yet nearly unburstable engine. In 1923 Franklin added a 1200 cc version, primarily intended for sidecar use, although most riders preferred to revel in the power of the new engine by riding solo.
This new “Big Chief” was good for 90mph, which was certainly a flaming arrow lobbed towards Milwaukee.
The Big Chief soon became the most popular Indian model and from 1929 on the 1000 cc version was discontinued and the 1200 was labelled “Chief”.
Year by year small improvements were carried through and through the 1930s the Chief remained the best-selling Indian model.
For the 1935 season the Indian range was extensively updated. The Chief, Standard Scout and Four were restyled with deep, valanced mudguards that ended in a sweeping curve.
The fuel tanks of all models were made more bulbous for increased capacity and were fitted with bayonet filler caps. For the 1938 model year a new tank-top instrument panel was added.
The speedometer, ammeter and ignition switch were one-year only items.
To accommodate the panel, the top frame tube was flattened and a casting was added.
By now the Chief had become a very powerful machine: at the Bonneville Salt Flats in September 1938 Fred Ludlow set the record for the stock 74 cu class at no less than 120.747 mph.
The “B” designation in the engine number refers to the battery and coil ignition, the Chief was also available with magneto ignition as the 338-M.
This impressive Chief is a very correct machine and was awarded recently 93 ½ points at the Dutch AMCA meeting.
She has been restored recently and comes with a comprehensive restoration file and Dutch registration documents.