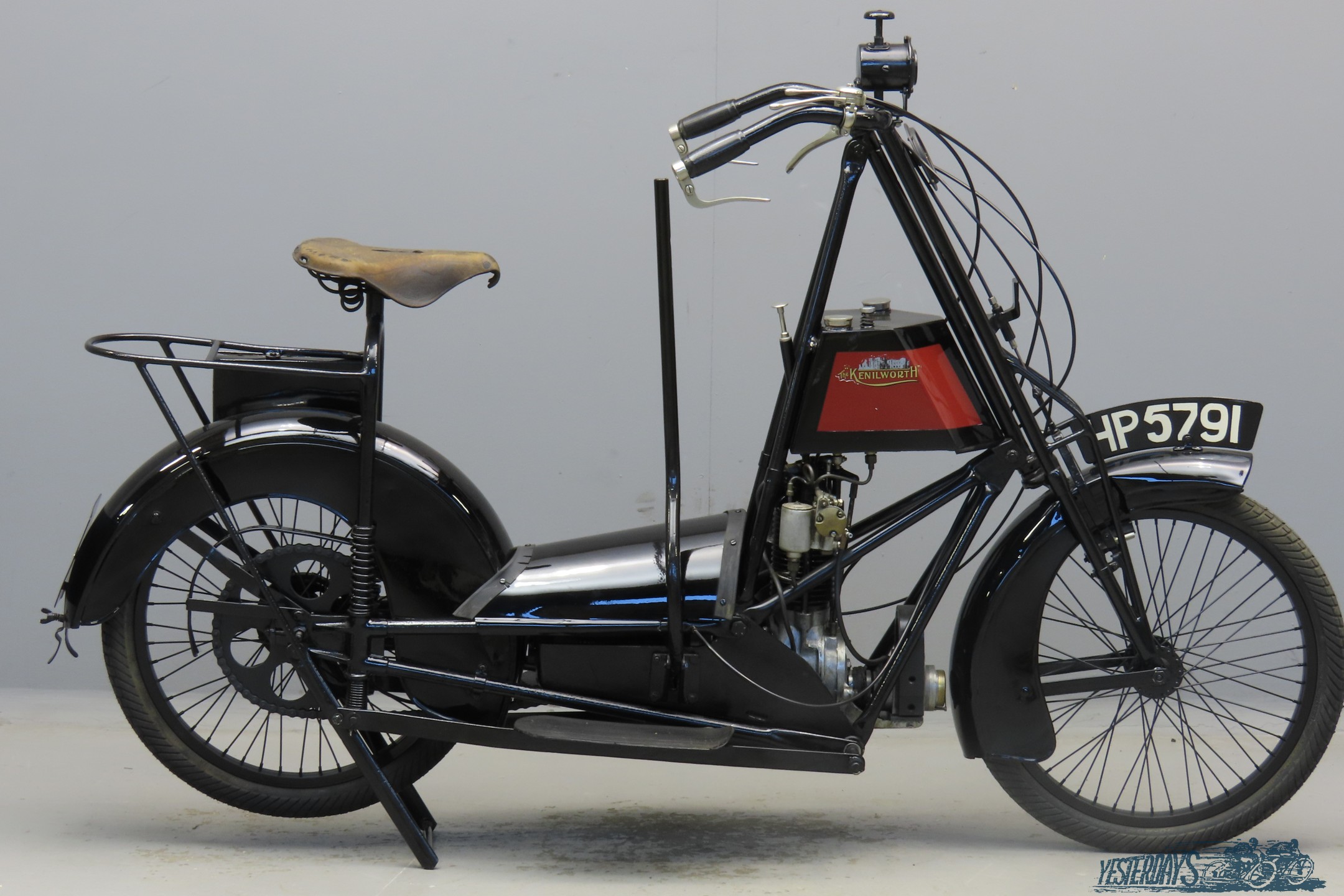 For some years after the 1914-1918 war small wheeled scooters enjoyed a certain popularity. The Kenilworth was one of these designs and it should be said to its credit that it survived for about 5 years, which certainly wasn’t true for most of its competitors. Designer was Captain Smith-Clarke of Kenilworth, chief engineer of the Alvis car company. The multi-tubed frame is bolted rather than brazed for the most part and the engine and petrol tank are placed low in the centre for good weight distribution. Front forks and rear wheel are unsprung but the seat tubes have coil spring suspension. Primary drive is by belt, secondary by chain and there are no gears on board. In 1919 tests were carried out with a prototype that was equipped with a veteran Clément engine; by early 1920 production models were ready.
The interesting little ohv engine has bore x stroke dimensions of 55x60mm and seems to have been an own design of Smith-Clarke and his associate T.G. John. Some years later it was described as a “Norman”. The first production Kenilworths had no saddle: for short journeys and shopping trips (these machines were primarily aimed at female buyers) standing was preferable to sitting for good control. The construction of the Kenilworth was taken up by the firm of Booth Brothers in Coventry.
Later types were equipped with a saddle. From 1923, towards the end of its production life in 1924, the Kenilworth got front springing, a hand starter and friction drive transmission. The engine position was also changed; it was now placed vertically inside the frame and turned 90 degrees. Not many of these interesting devices were made and only very few have survived the ravages of time.
The Classic Motorcycle of March, 2018 features an article in which four scooters from the Sammy Miller collection are compared: the Kenilworth, Kingsbury, Stafford Pup and ABC Skootamota.

An issue of “The Motor Cycle” from November 1922 mentions: “…Kenilworth Machine now fitted with an infinitely variable gear. In spite of the fact that large numbers of scooter type machines have disappeared from the market, the little Kenilworth has met with success and has proved exceedingly popular amongst its owners. Originally the machine had primary belt drive to a countershaft, the final drive being by chain; only a single gear ratio was available. The engine is now set longitudinally in the frame, and the crankshaft carries a cast-iron flywheel at the rear end; against this flywheel bears a Ferodo-faced driven disc having a diameter of 7 inch. The disc is carried on a square shaft and supported in Skefko ball bearings, the final drive sprocket lying on the outside of the central bearing. Only a very light compression spring is needed for engagement.  So light is the operation of the gear that the control is effected by an ordinary carburetter air lever and since the Vici single-lever carburetter is employed, the only addition to handle-bar fittings is a clutch lever. The friction gear is so efficient that it is possible to get away from a stand-still on a gradient of 1 in 9 with ease; the range of gear ratios available vary from 6 to 1 to 12 to 1. Propelled by a 142 c.c. o.h.v. engine the Kenilworth is noted for its sturdy construction and sprung saddle pillar and footrests. It is a handy little machine, and in its latest form should make an appeal – especially to ladies who require to travel short distances daily…”

This fascinating and historically significant scooter was discovered a number of years ago in Kings Lynn in Britain and subsequently restored. It’s a later model, it has the new engine position with friction drive and hand starting handle, but the front forks are still unsprung. It comes with handlebar-mounted push horn and Brooks saddle.