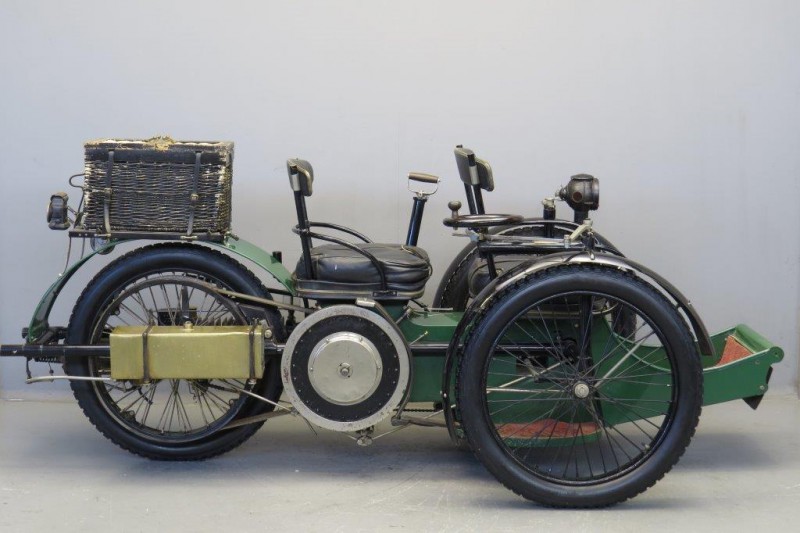 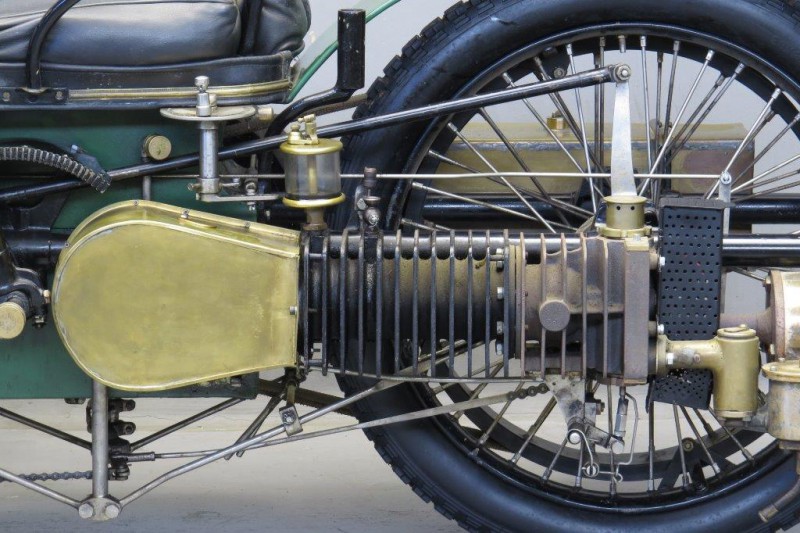 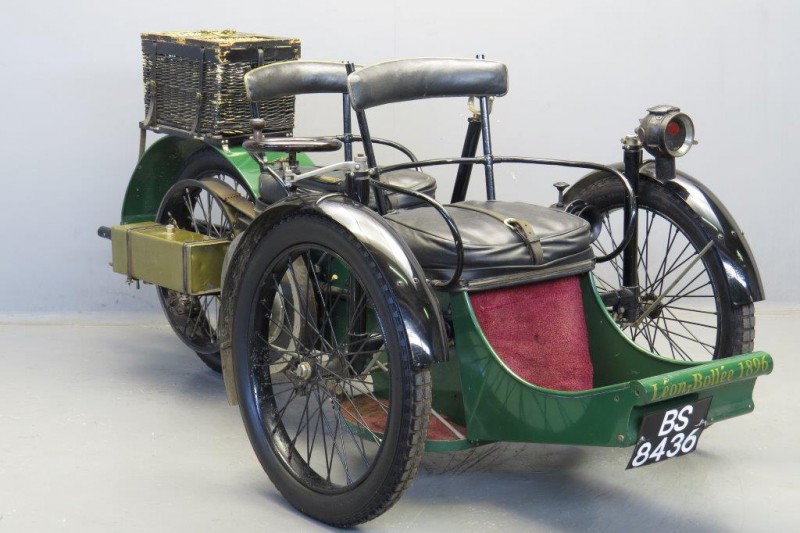 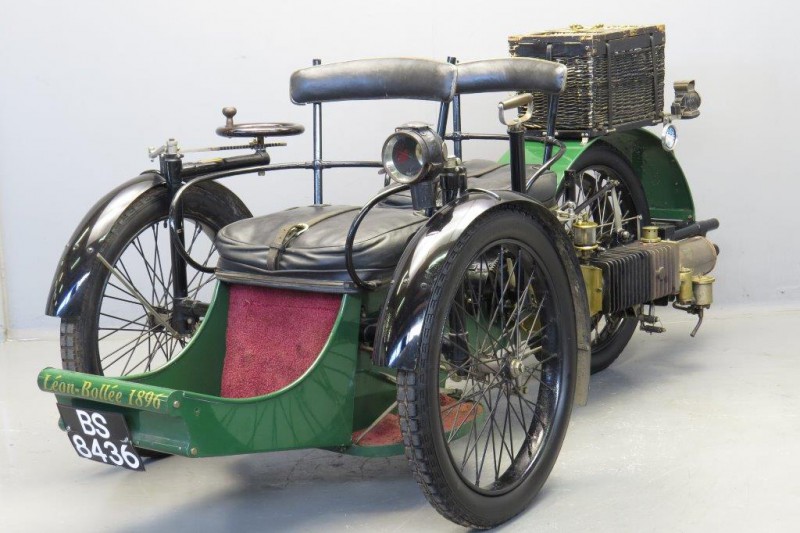 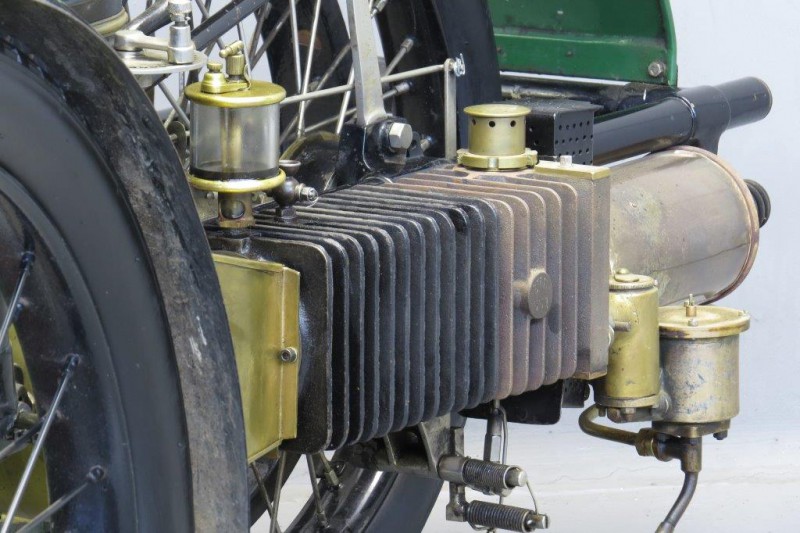 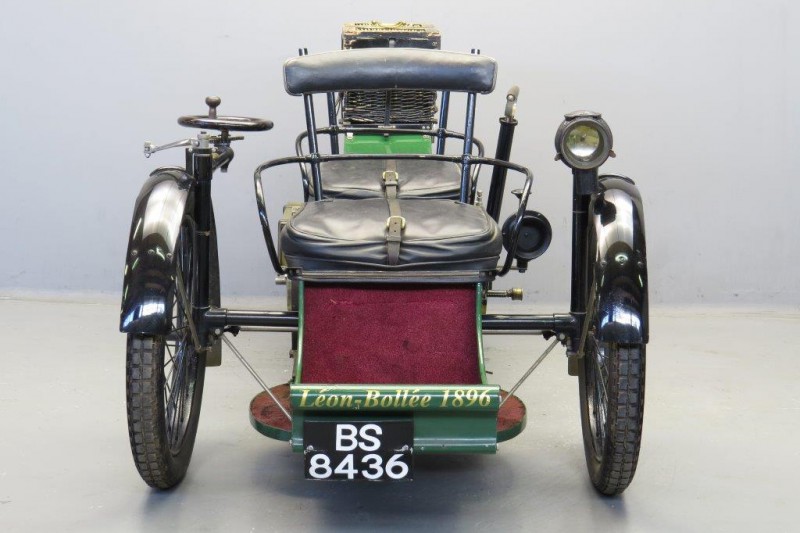 Léon Bollée came from a family of inventors; his father, Amédée Bollée père, was the most important pioneer of steam road vehicles in France.
Léon patented a mechanical calculating machine in 1889, gaining a gold medal from the Exposition Universelle held that year in Paris, but soon turned to vehicles.
In 1895 he presented a small three-wheeled petrol car that he named “Voiturette”.
It was powered by an air-cooled, single cylinder 650cc (3hp) engine with bore x stroke of 75 x 145 mm and  employed  hot-tube ignition and three forward gears.
The Voiturette was at the time the fastest petrol-engined vehicle on the road.
It had a tubular frame with a steel footwell at the front to protect the  passenger’s feet from puddles on the road and the driver sat at the rear.
This was a practical layout because he could then communicate with his (lady)passenger and still have his eyes on the road.
The Voiturette sold well and several hundreds were made for Léon Bollée by Hurtu & Diligeon in Albert; only the prototypes were made at the Le Mans  Bollée  factory.
In 1897 modified versions won the Paris-Dieppe race at 24 mph and the Paris-Trouville race at 28 mph.
In 1899 the vehicle was superseded by a 4-wheeler and in 1901 the design rights were sold to Darracq.
Later on  Bollée became fascinated with aviation: the first flight by the Wright brothers in Europe was made in August 1908, at Léon’s request.
Unfortunately he was seriously injured in an air crash in 1911.
Worn out by the effects of his injuries, stress and overwork, he died in Neuilly-sur-Seine on 19th December 1913, aged only 43.
The name “Voiturette” however was taken up by both the trade and public in France as a name in general for a small light car and so it continued to be used.

This rare and practical veteran vehicle  has  VCSL Certificate of date number 2507.
For practical reasons the hot tube ignition system has been converted to battery and coil.