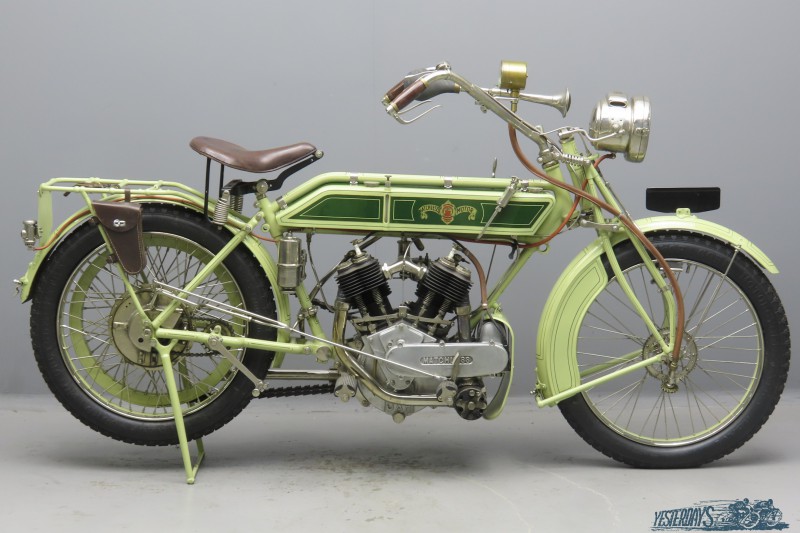 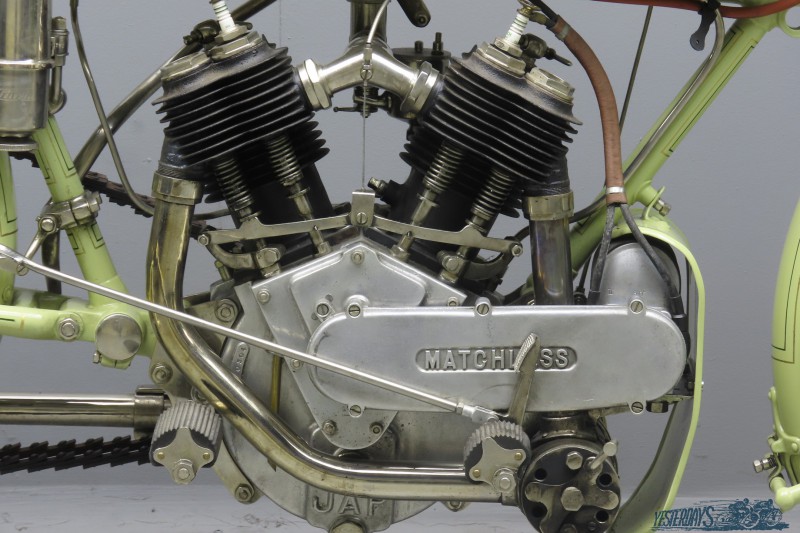 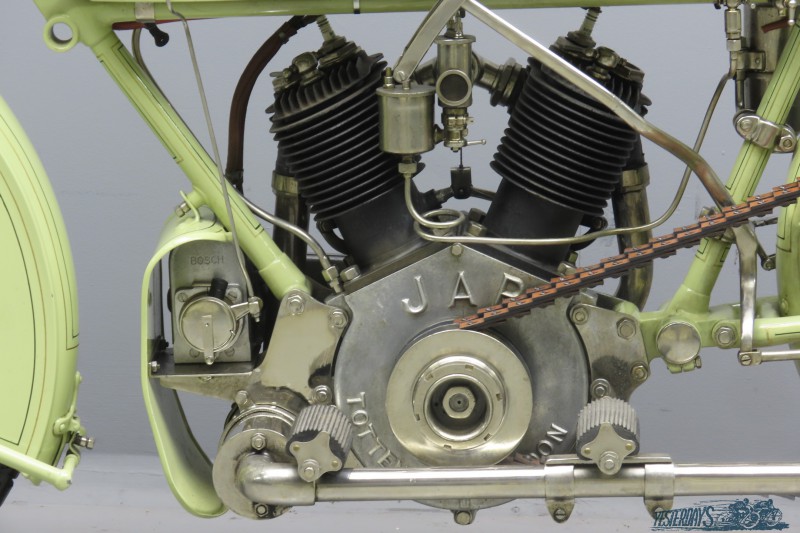 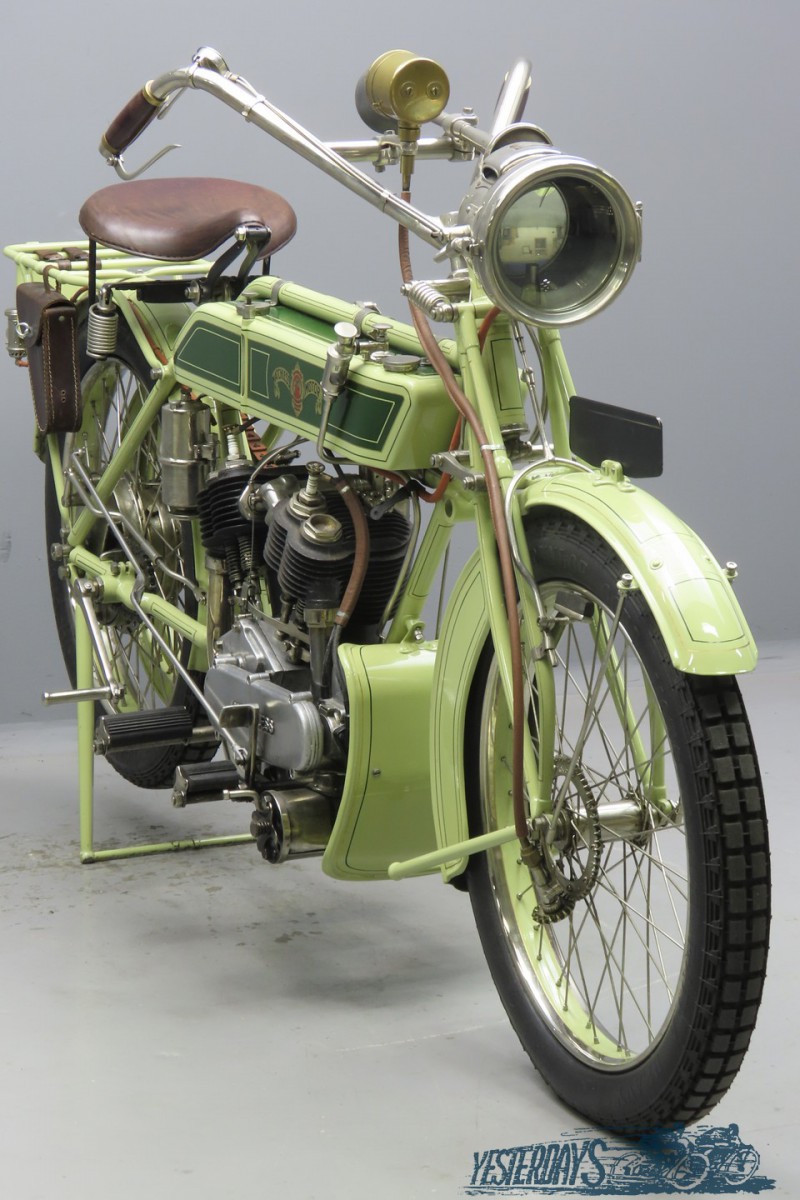 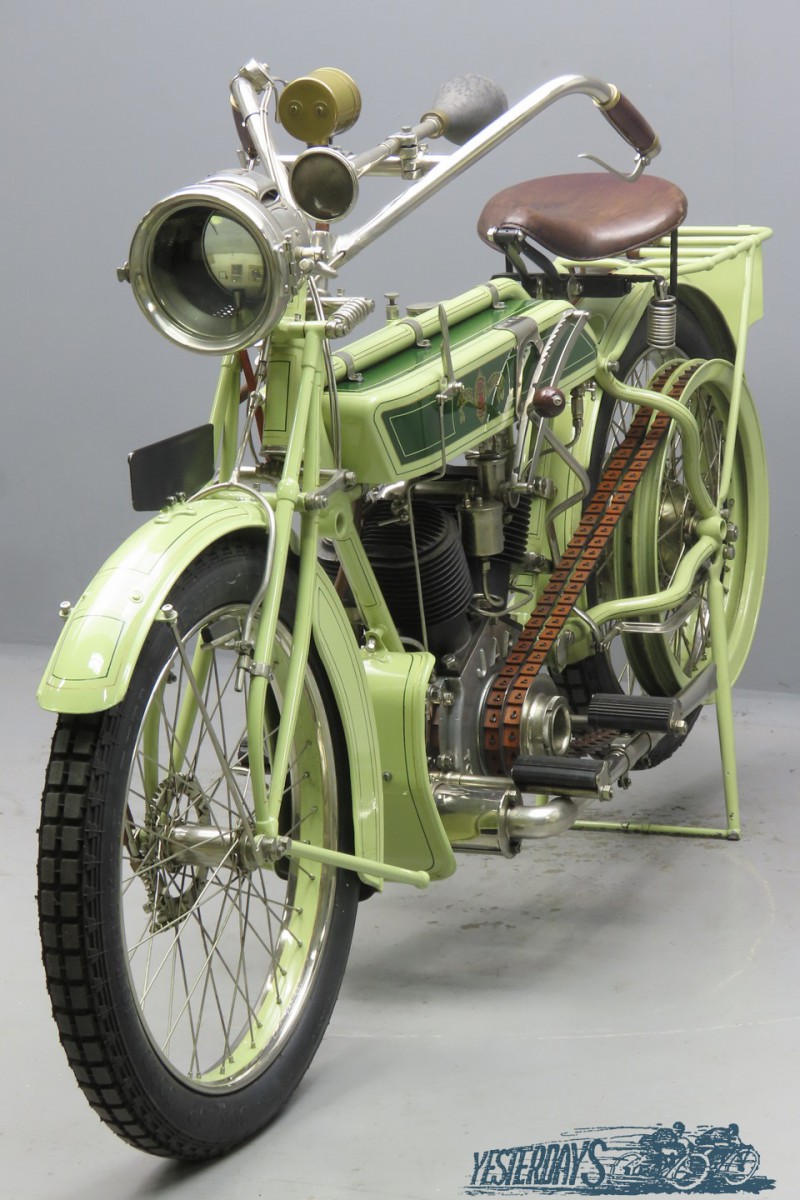 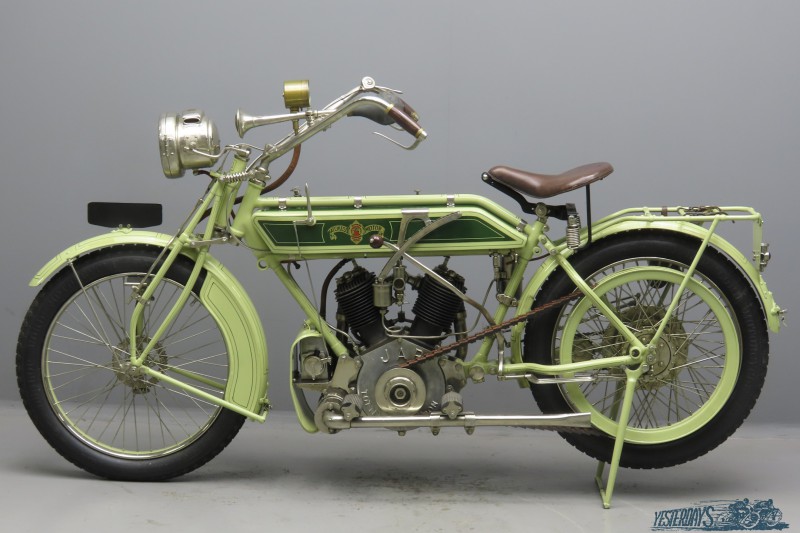 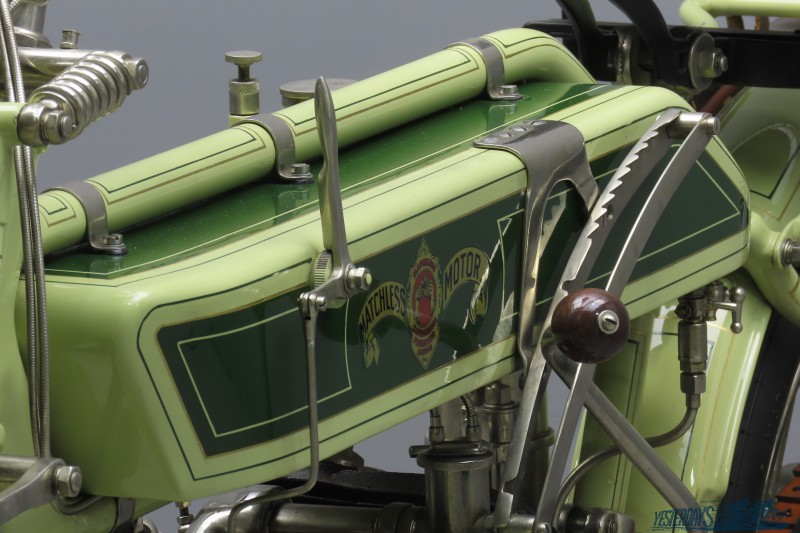 The first Matchless motorcycle was made by the Collier brothers in 1899.
Manx TT results were very good between 1907 and 1912 for Charlie and Harry Collier and this gave a boost to the popularity of the make.
In the 1912 line-up four machines were fitted with JAP single cylinder power sources, but the 1913 catalogue announced only V-twins: “We are convinced that the twin-cylinder engine is far superior to the single-cylinder engine of the same power, and are discontinuing the manufacture of machines fitted with the latter” it was stated.
The lightest model for 1913 was a 3½HP meant for solo work, the 7HP and 8HP machines were designed to be used with a sidecar alongside.
For the real sportsman there was the coveted ” TT Twin Cylinder” that had an OHV engine.
As to transmission and gearing the company offered several choices: direct belt drive (fixed or with Matchless Gradua Gear, a Zenith licence), 2 speed ROC lookalike rear hub with free engine or countershaft gears with chain drive to the rear wheel.
This last construction was used on the new Model 8 and entailed two driving chains to the rear wheel: on the left side the high speed drive chain, on the right side the drive for when the low gear is required.
An interesting detail is that the engine mounts were tailor made for each machine and were numbered on the inside; these numbers are the same as the engine number on our machine, proof that the engine has never been switched.
Regarding the machine’s history it’s worth mentioning that from the 1950s till the late 1990s this Mighty Matchless belonged to British watchmaker George Daniels (19 August 1926 – 21 October 2011).
Daniels was a British horologist who was considered to be the best in the world during his lifetime.
He was one of the few modern watchmakers who built complete watches by hand (including the case and dial).
But it was his creation of the coaxial escapement for which he will be most remembered.
The movement, which removed the need to add a lubricant, has been used by Omega in their highest-grade watches since 1999.
Apparently Daniels was not only interested in watch technology but also in vintage cars and motorcycles, see http://en.wikipedia.org/wiki/George_Daniels_(watchmaker) .
In his autobiography “All in Good Time: Reflections of a Watchmaker” there is a photo of George with the Matchless.
The machine was purchased in 1999 from Daniels’ collection by a German connoisseur who was responsible for the meticulous restoration.
Since 2015 she has been part of a Dutch enthousiast’s collection.
Our Model 7 bristles with interesting features; note the enclosed-spring front suspension and the robust Matchless-JAP V-twin with dual belt drive to the rear wheel, a unique design feature to prevent belt breakage due to the torque of the big twin (or so stated the company).
The huge lever on the nearside of the tank controls the two-speed hub gear in the rear wheel.
Inside the hub is an internal expanding brake with bronze brake shoes.
This Matchless is an outstanding example of veteran motorcycle technology; the machine is a concourse restoration. Accessories include Lucas acetylene front and rear lights (with impressive “King’s Own” headlamp), Miller acetylene generator, Desmo bulb horn and Jones speedometer.