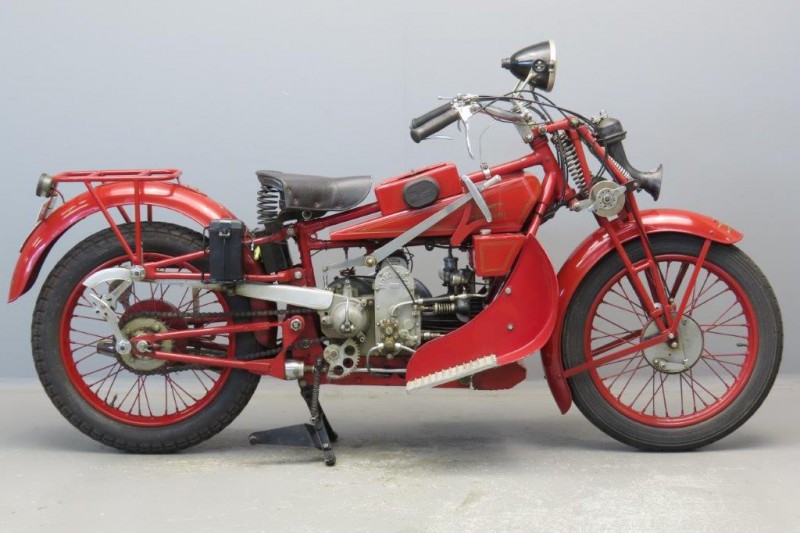 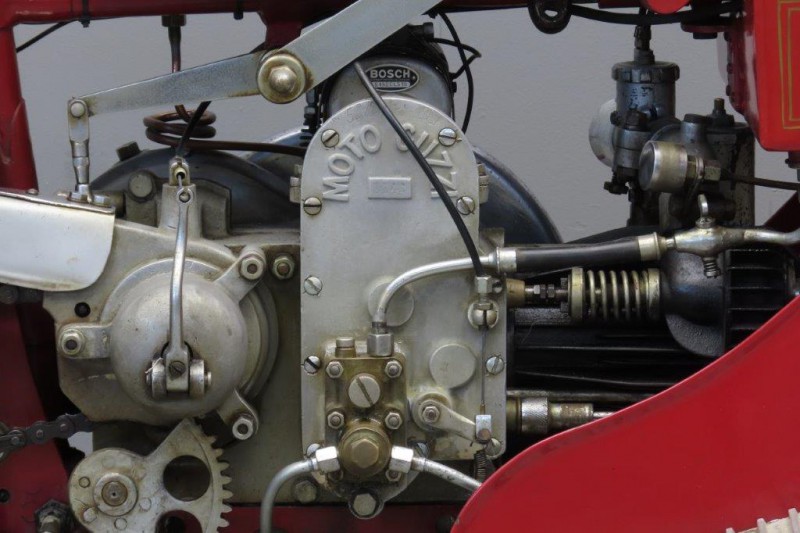 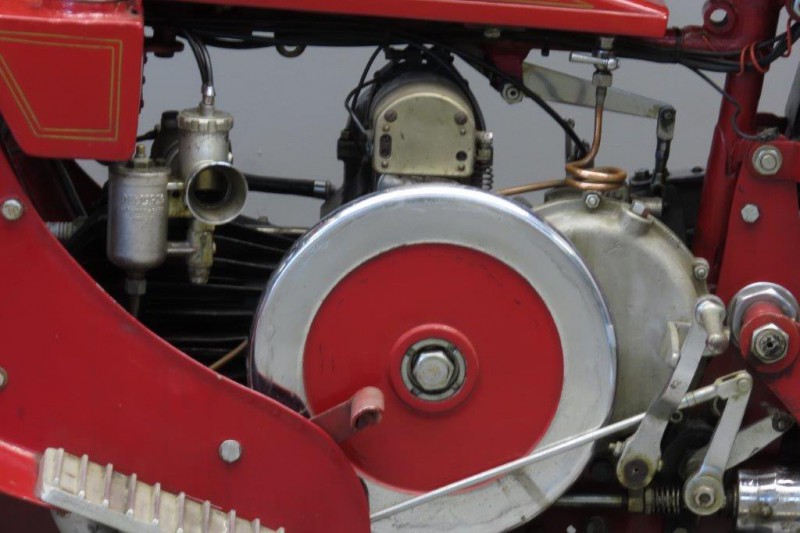 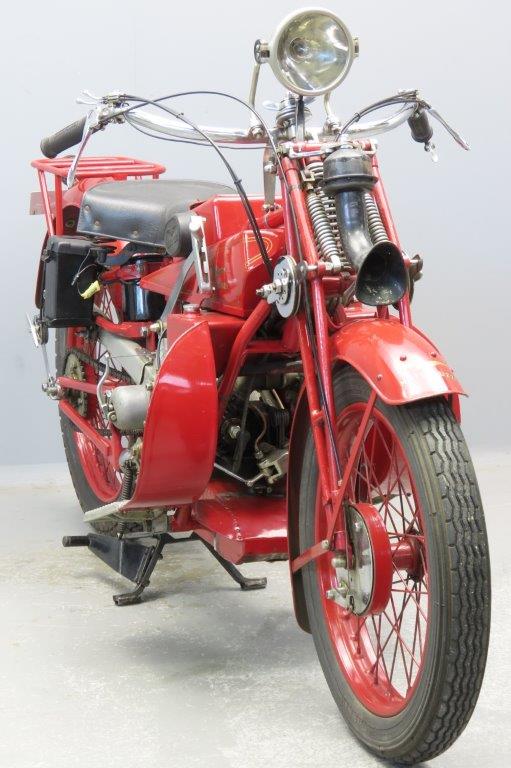 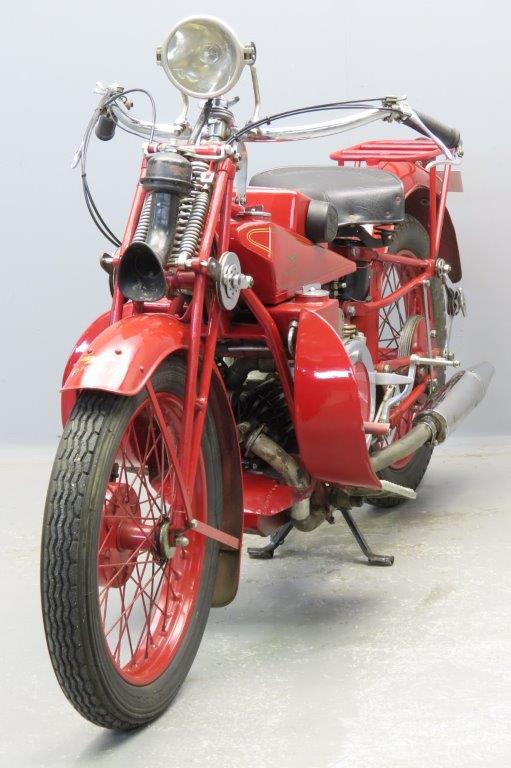 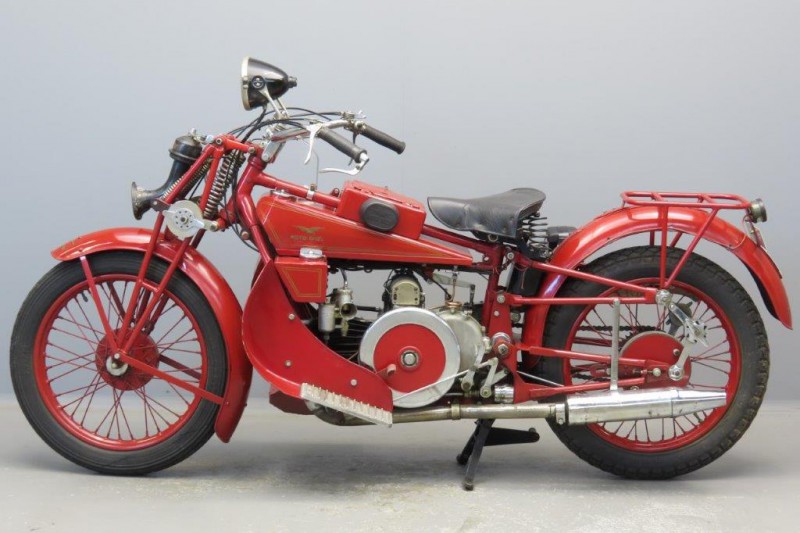 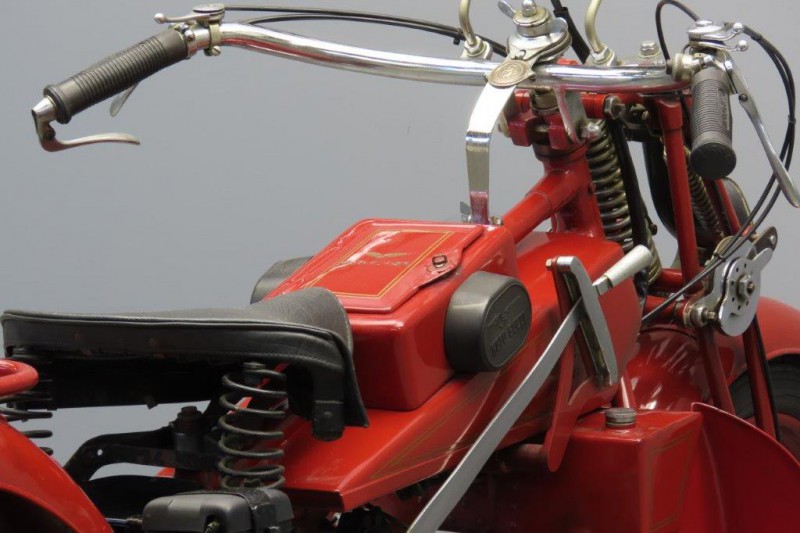 Moto Guzzi has been a leading make in Italy since 1921 and it is one of the few Italian makes to become well-known abroad.
From the twenties on a number of interesting racing machines with OHC engines were developed and Guzzis became a force to reckon with in TT races.
In the 1926 lightweight TT Ghersi was credited with the fastest lap and he actually was disqualified from the second place because the spark plug he used in the race was of a different make as the one he used in the practice session.
In1935 Stanley Woods won the Lightweight TT with a spring frame single Moto Guzzi; the next day Woods won the Senior race on a Guzzi twin!
The design of the Sport engine goes back to the early twenties.
It replaced the “Normale” type and from 1923 till 1928 the Sport was the only production Guzzi in the range.
It was finished in green with gold pin striping up to including 1927, after that the colour changed to red.
The Sport has a remarkable engine with its horizontal cylinder, radial finning to enhance cooling and big but slender exposed flywheel; the idea behind this construction being to keep the engine’s main bearings close together.
In 1927 Giuseppe Guzzi, elder brother of Carlo and the engineering genius of the family, designed a prototype of a touring version of the Sport model, the Grand Tourer (GT).
This machine was equipped with a very comfortable and well designed sprung frame, a swing arm with friction dampers.
The new model was dubbed “Norge” after the Italian airship that had carried out the first verified flight over the North Pole in 1926.
Giuseppe made a 6000 km long trip to the North Cape with the new GT 500 in the summer of 1928.
This feat created much publicity for the firm. However, despite its modest price, its stability and comfort the GT sales struggled for a few years because the public was rather sceptical about this new construction.
A few years later competition successes with its successor, the GT 16, would convince the prospective buyers of the merits of the sprung frame.
Sales went markedly up then but from the original GT only 78 machines were sold between 1928 and 1930.
Consequently, this older-restoration machine with Bosch lighting system and horn can be considered a rare bird indeed.