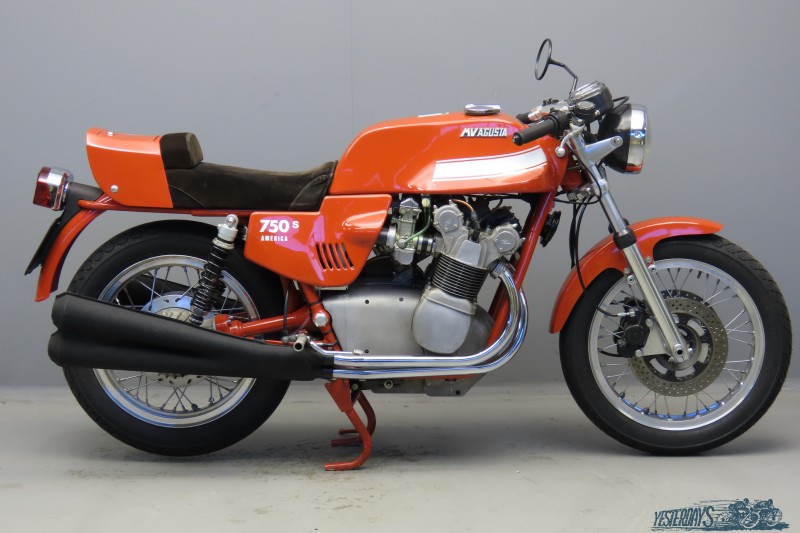 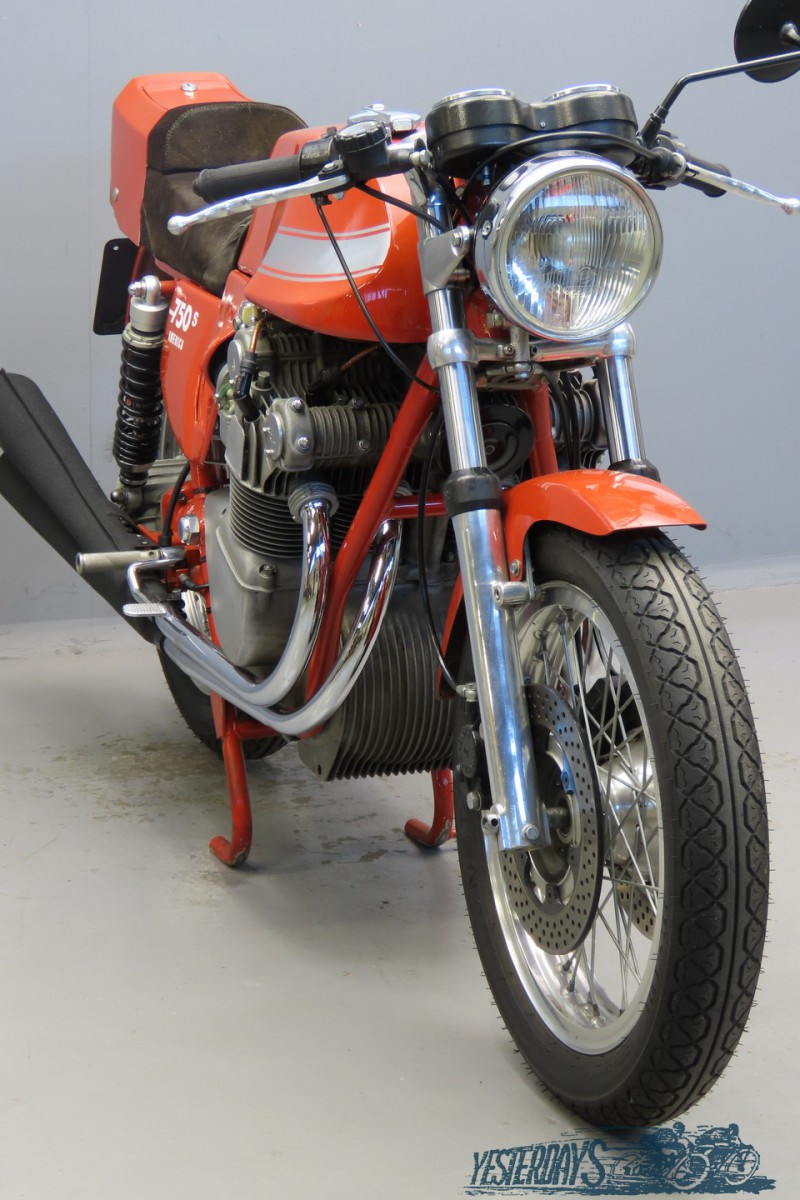 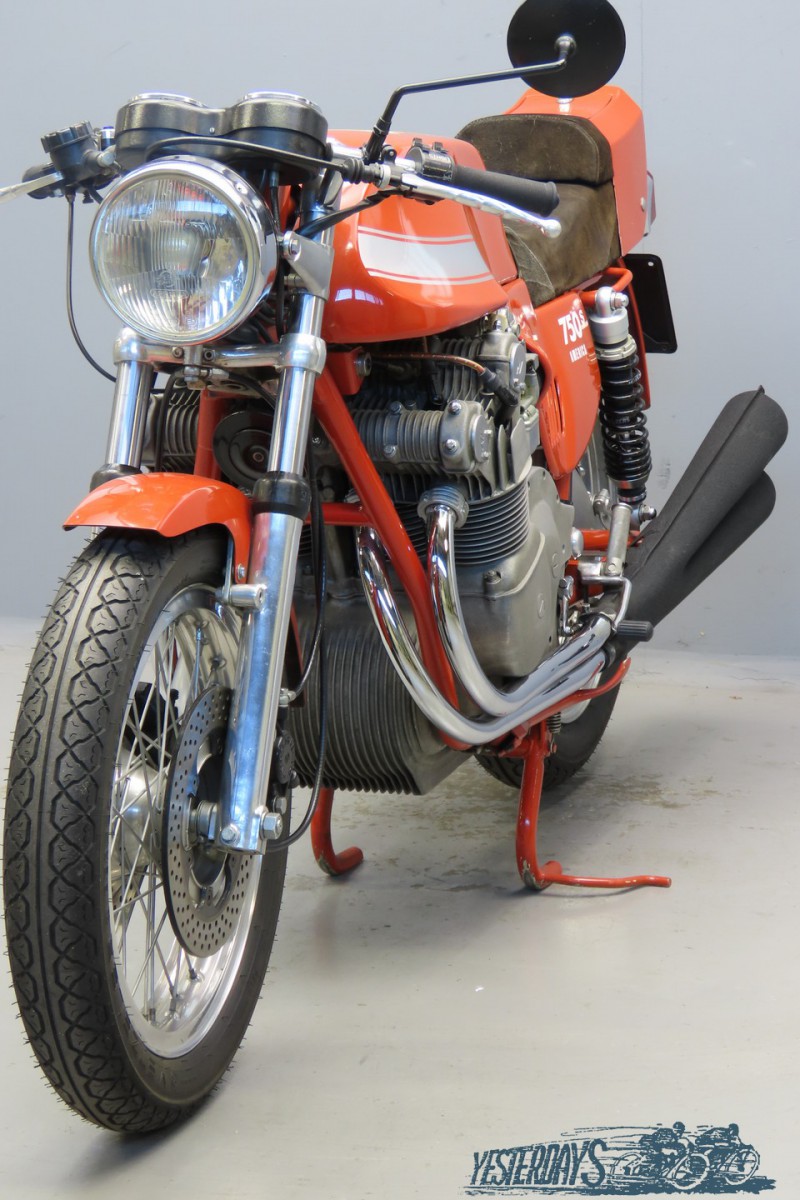 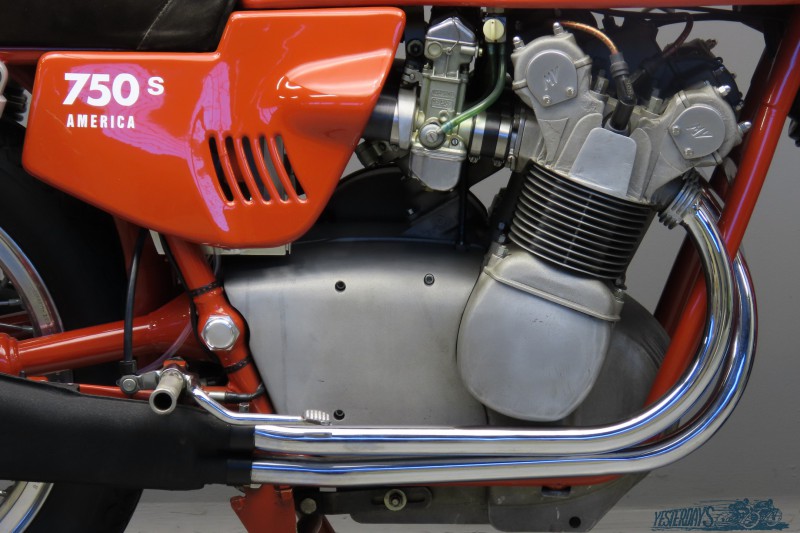 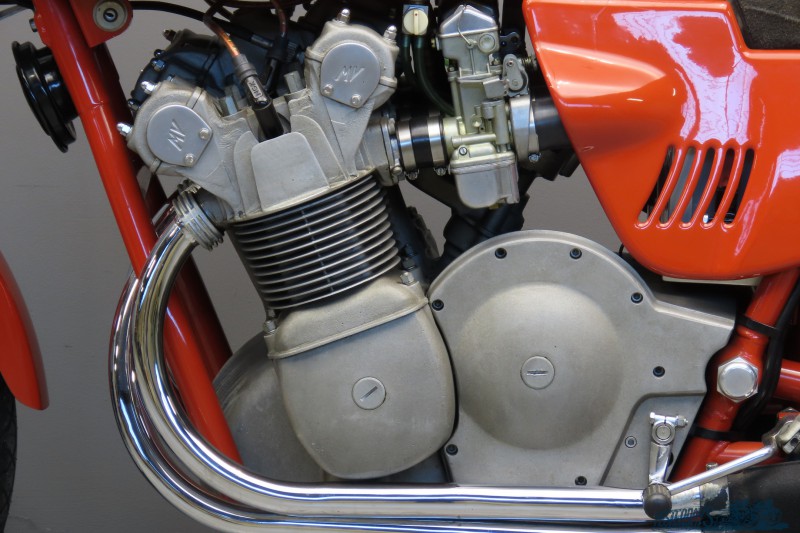 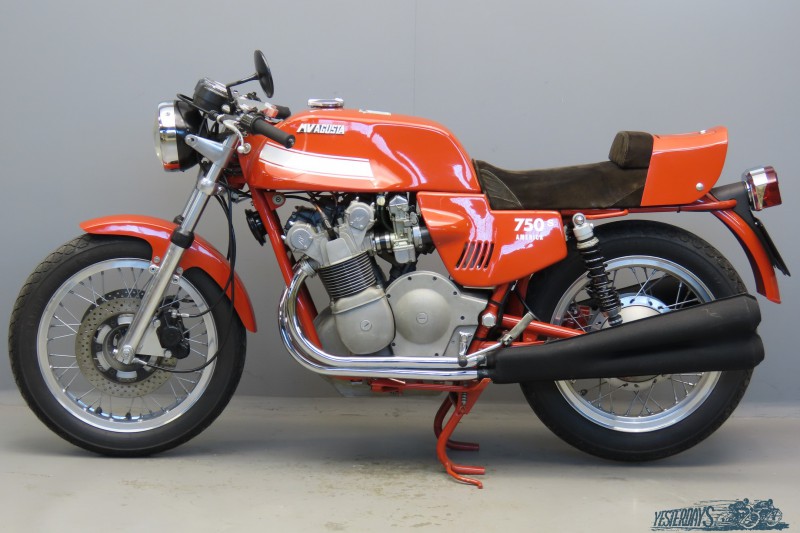 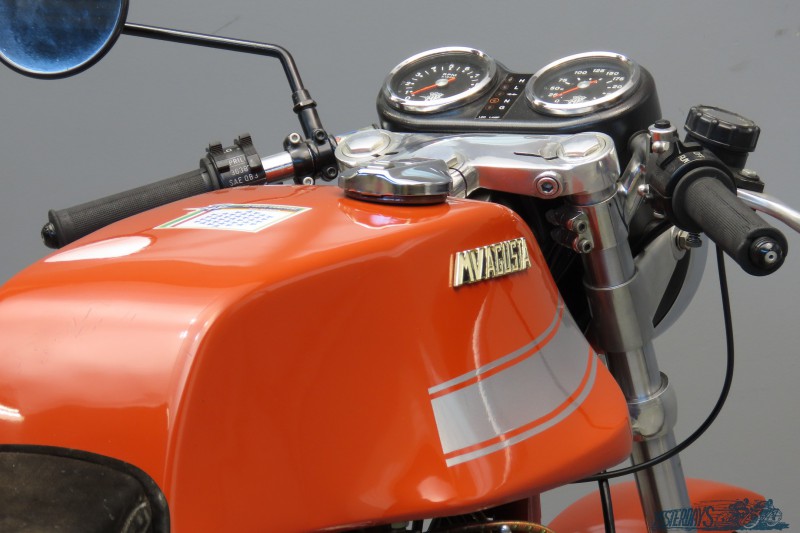 The 750S America model was introduced in 1975. It featured blockier styling and a larger engine than previous MV 750s. MV Agusta’s glorious racing background gave rise to numerous street bikes over the years, such as the 1977 MV Agusta 750S America motorcycle.
The 790-cc double-overhead-cam four-cylinder engine in the 1977 MV Agusta 750S America motorcycle had its roots in a 500-cc racing powerplant. The exhaust system is a combination of chrome downtubes with four megaphones finished in black crinkle paint, never seen before on a whatever new factory supplied machine. Weighing 507 pounds without fluids, the 750S is no lightweight, but its handling at speed belies the mass. The suede-covered racing saddle keeps the pilot in place during the kind of spirited cornering maneuvers the 750S is so well known for. Like previous MVs, the 750S America was expensive and exclusive and everyone knows Italian style and performance have never been cheap. And that goes double for motorcycles built by that most exclusive of Italy’s bike-makers, MV Agusta. However you get something for money. Lots of power. Lots of styling. Lots of attention when you roll up to a stoplight or cafe on a bike that makes everything else seem so ordinary.
With the 1975 MV Agusta 750 Sport America, you got all that and more—an intoxicating taste of la dolce vita. It just couldn’t get much sweeter. After all, MV Agusta’s name was synonymous with grand-prix racing. From 1952 through 1973, MV Agusta won 37 world road-racing championships, including 16 500cc titles in 18 years. This was a company that made helicopters for profit and gorgeous red racing bikes for fun. So when MV turned out streetbikes—and it never made many—you could count on that grand-prix experience going into each one.
The engine is a 790cc inline four with dual overhead cams. There are twin disc brakes in front and a tachometer that redlined at 8,500 rpm.
The differences start with the engine’s sand-cast cases that telegraph its limited production run. Inside is a powerplant derived from MV’s racers. And in case you didn’t get the message, there’s a decal with 37 blue stars, one for every campione del mondo. Fire up the MV, and there’s no mistaking the bike’s lineage.
The styling is pure Italian and just as breathtaking as the motorcycles styling and performance, though, was the price. At a time when Honda’s CB750 went for $2,190, the MV cost three times as much—$6,500 retail. But, as with so many things in life, if you want it, it is worth it.