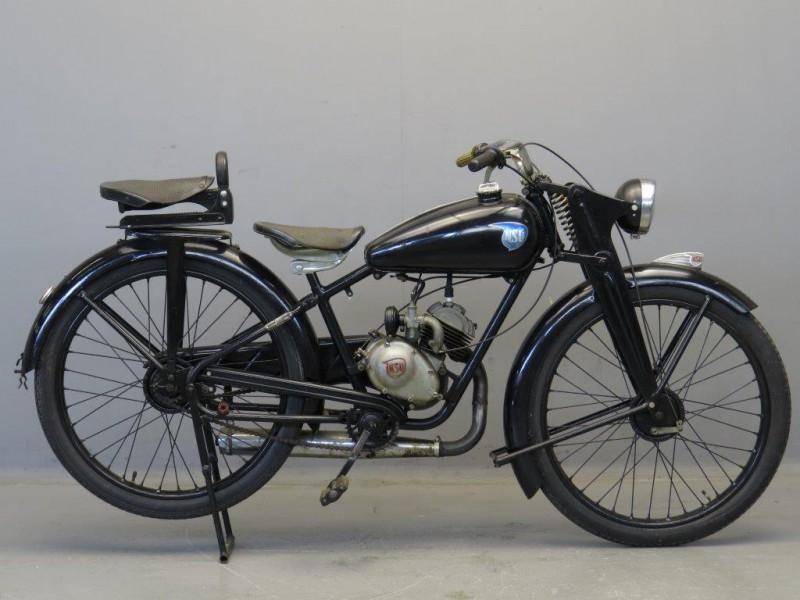 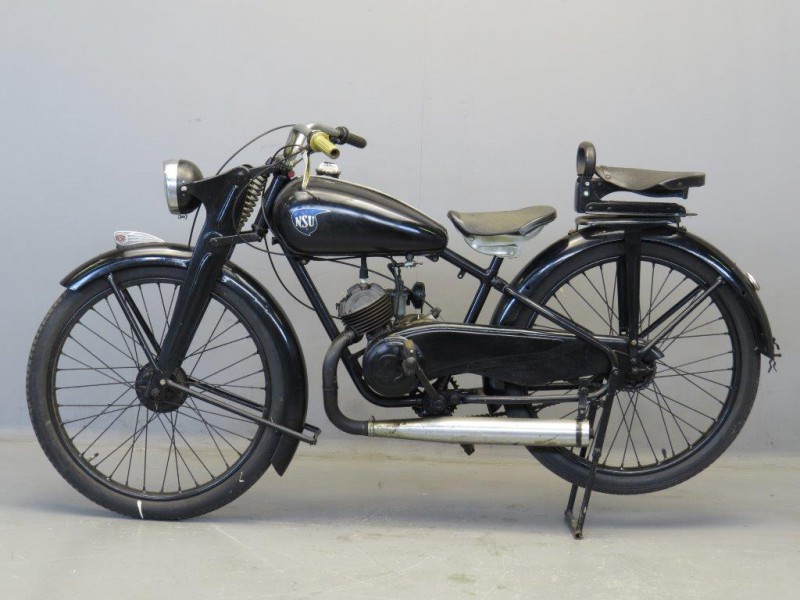 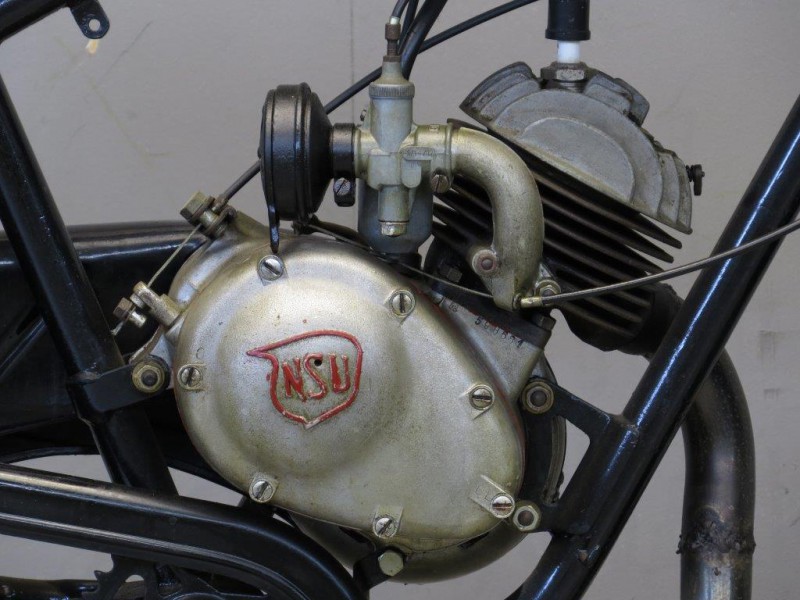 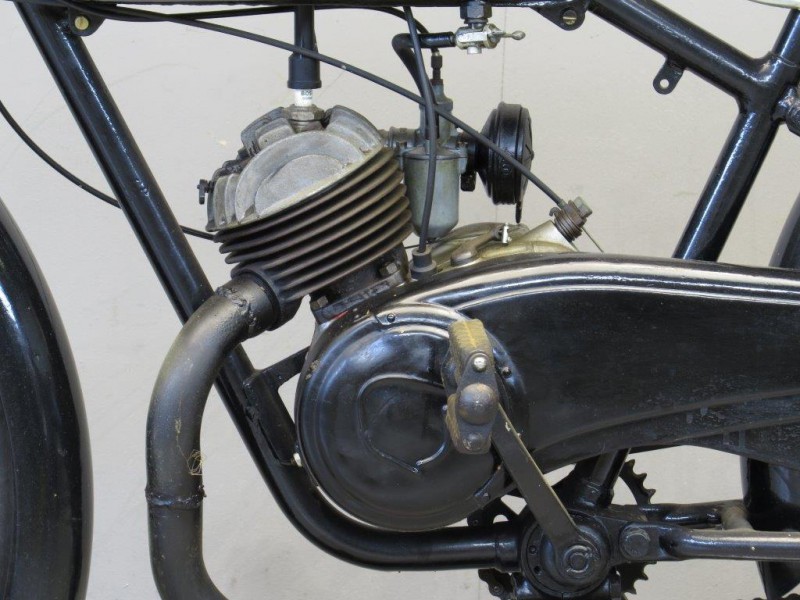 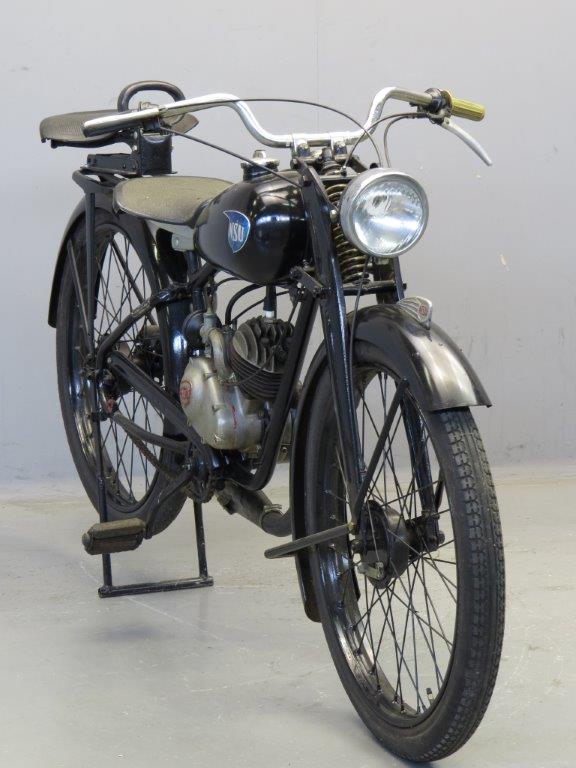 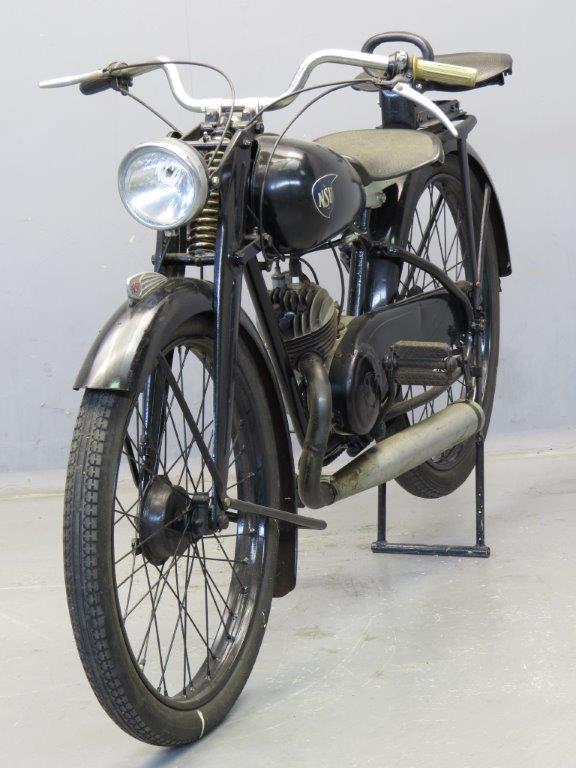 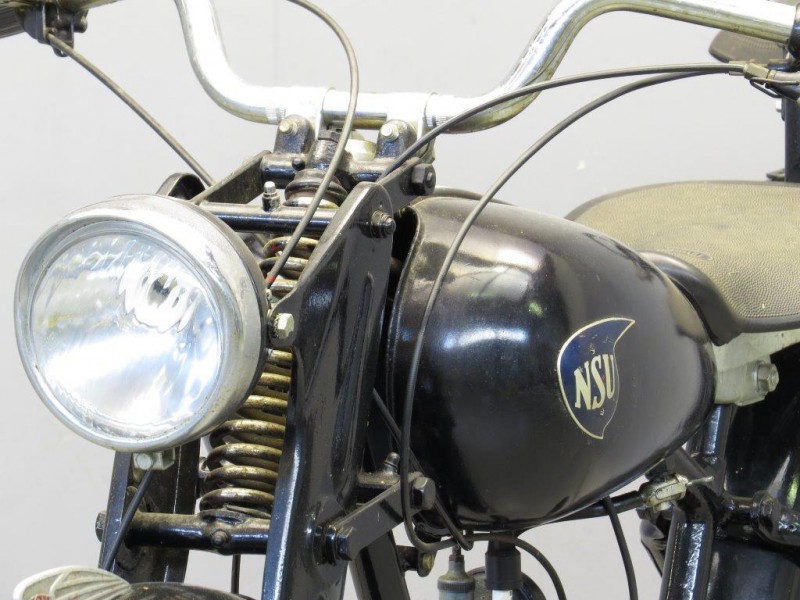 The NSU quick is a “motor bike” (motorcycle with cranks), designed by NSU and made from 1936 to 1953.
235.441 units were produced in this time with only minor changes.
The frame construction is essentially a bicycle frame, but with more tubes, to withstand the load by the motor and the higher speeds.
in 1936 there were two versions: With medium-high step-through and dress safety nets at the rear.
The front forks of both versions is a parallelogram  fork with steel springs. There is no rear suspension.
The driver’s seat is adjustable.
The air-cooled NSU single cylinder two-stroke engine is driven with nose piston.
The performance of the small engine (98 CC) is a moderate3 HP.
The two-speed gearbox is one unit with the engine.
The NSU quick has two drive chains: At the right  for bicycle operation and at the left for the engine drive.
To start the engine , she has to be on the rear stand so that the rear wheel can turn freely. However it is also possible to put it in gear and just cycle the bike till it starts.
The first models of the NSU quick had a coaster brake , but already in 1938 replaced by an expanding brake , actuated by the pedals.
NSU quick data 1952/53
Enginer: 1-cylinder two-stroke (with flywheel magneto)
Displacement: 98 cc
Bore x stroke: 49 × 52 mm
Performance : 2,2 kW (3 HP) with @ 4750 rpm
Cooling: air cooled
Transmission: 2-speed transmission .
Brakes: expanding brake front and rear
Suspension front: parallelogram fork with steel springs (without cushioning)
Rear suspension: none
Wheelbase: 1225 mm
Tyre size: 26 × 2.50
Weight: 69 kg
Fuel tank content approx. 9.5 litres
Standard consumption : 1,9 l / 100 km (mix)
Maximum speed: 55-60 km/h
In 1936,  the NSU quick cost 290 Reichsmark and was regarded as the cheapest motorcycle in the world.
After the war, they were 540 DM (1949) or 625 DM (1952).
There was no special equipment.
The standard version was: “black enamelled with trim lines, tank and numerous other parts chrome.”
In September 1951, the tire size was reinforced from previously 26 × 2.25 on 26 × 2.50. Thus, for the first time officially a passenger could be carried as well. As an extra, a passenger seat and pillion footrests were available .
This 1952  NSU Quick will need the customary safety checks before road use.