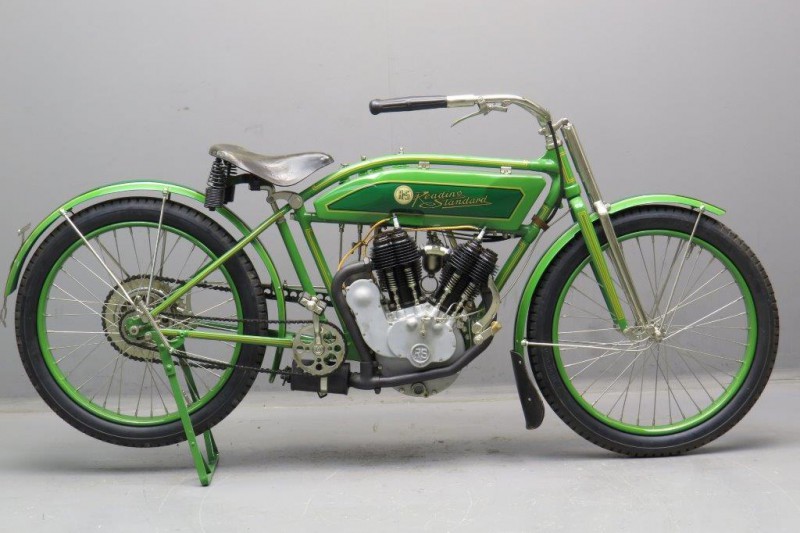 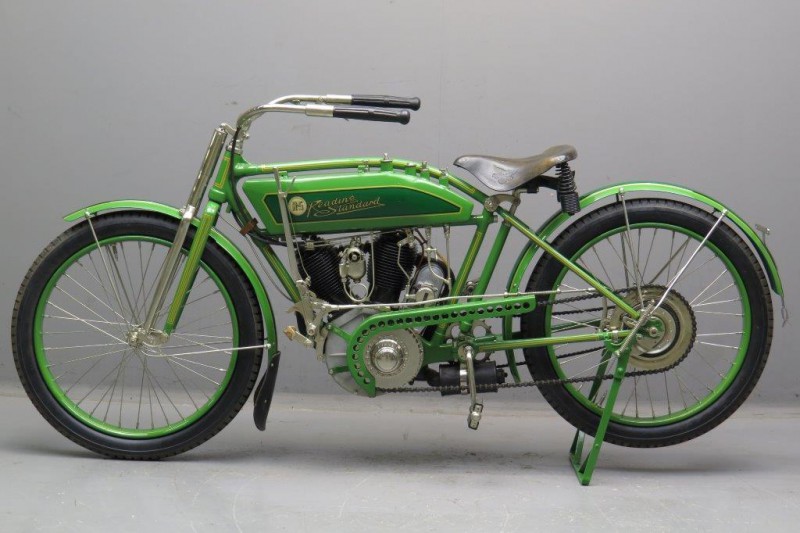 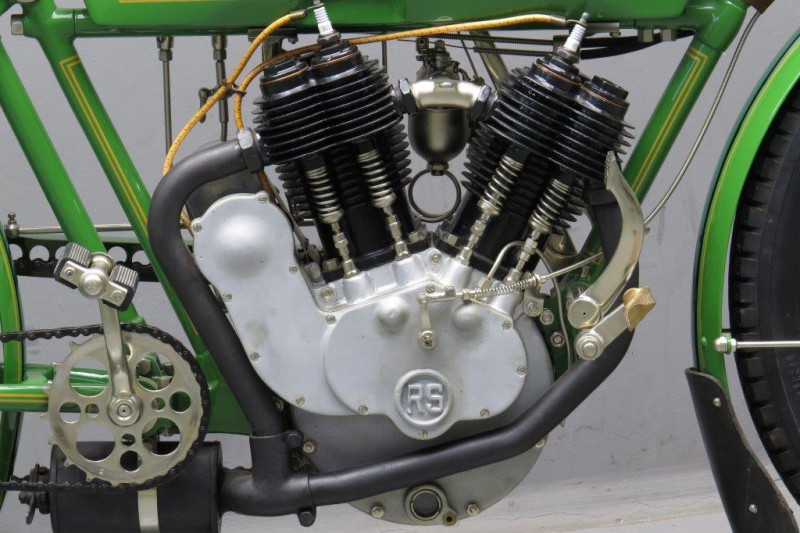 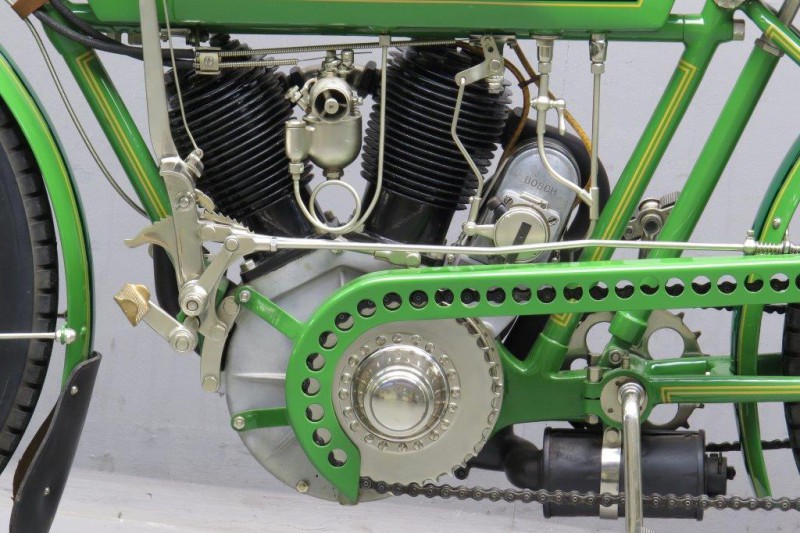 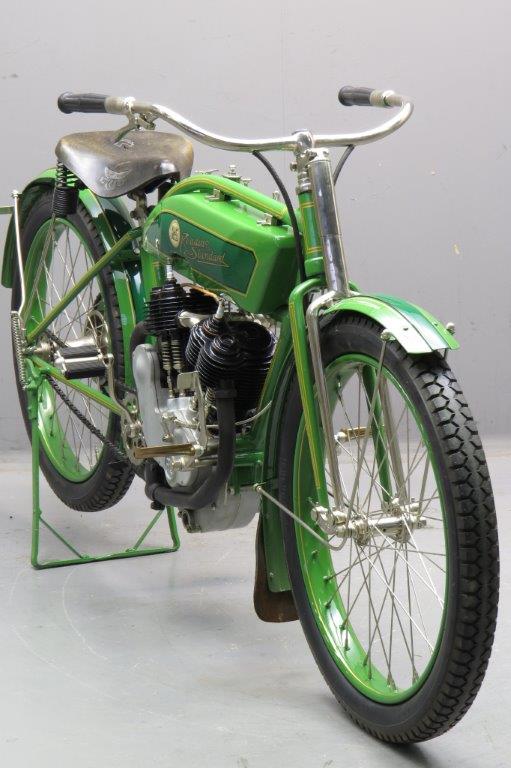 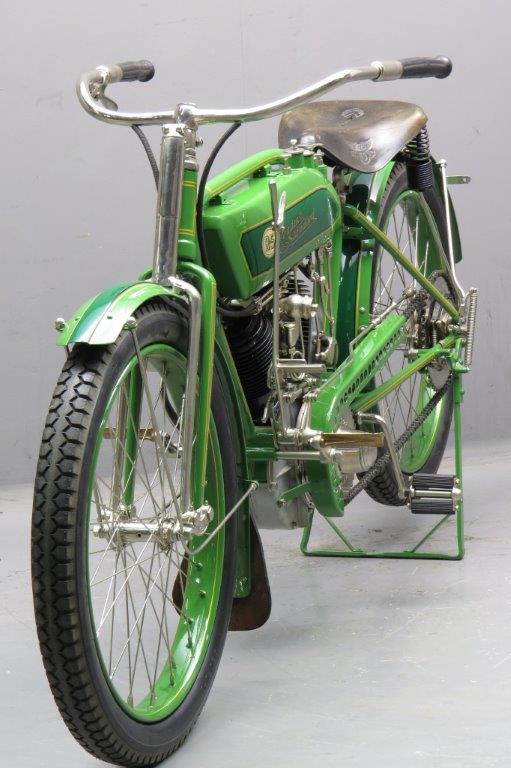 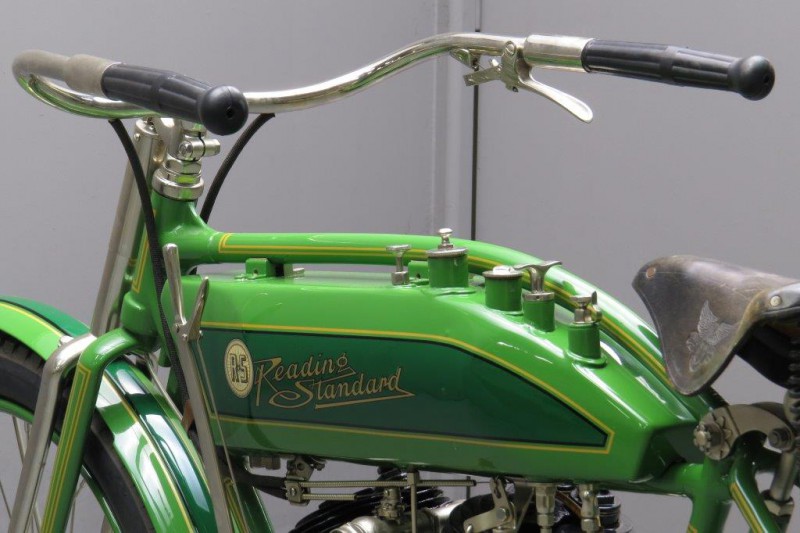 Reading  Standard machines were manufactured between 1903 and 1924 in Reading, Pennsylvania.
The company slogan was “Built and tested in the mountains”.
The firm started in 1903  with the  production of single-cylinder clones of Indians and Thors, but soon engineer Charles Gustafsson would make his mark.
Gustafsson had studied European design trends, and when Reading-Standard introduced its first side valve engine in 1907 it was the only American manufacturer offering this type of power unit.
Its superiority to other contemporary designs was illustrated in July of that same year when a trio of Reading-Standards climbed to the top of Pikes Peak, a feat that would remain unequalled by any other motorcycle for the next five years.
Gustafsson left the firm in 1907 and joined the much bigger Indian Motocycle Company.
One of his successful designs for Indian was the  PowerPlus model, that was brought out in 1916.

V-twin  Reading Standards  arrived in 1908.
Early examples sported a more conventional F-head (overhead intake, side exhaust) configuration, but the arrangement was unusual:
The valves were on the left side of the front cylinder, but on the right side of the rear cylinder.
These first V-twins displaced 722 cc, but had grown to about 1000 cc when our featured 1913 Reading Standard motorcycle was built.
By now, the company had converted its twins to a side valve  design.
Later versions displaced as much as 1180 cc.

In 1922 the company was taken over by the Cleveland Motorcycle Company.
In October 1923  Reading Standard announced a new model, the 1924 “Greyhound” that had some 15 improvements to the 1923 model.
The selling price was to be around  $345, while at that time a Ford Model T would cost around $290.
Sales were not encouraging, so  in 1924 the Cleveland Motorcycle  Co.decided to drop R.S. production and concentrate on their own  small two stroke model and their newly designed inline four.
Some five years later the curtain fell for Cleveland as well.
This 7 HP model has a number of interesting features.
It has a cone clutch, operated by a hand lever on the left of the machine.
There are no gears and the drive to the rear wheel is by chain.
Two  band brakes are fitted to the rear wheel, one operated by the pedals and the other  by the brake lever near the right hand side footrest.
The valve lifter is controlled by a lever on the right of the handlebars.
Note the extreme long handlebar grips; the idea was that  holding the extensions would provide a more relaxed and comfortable  ride, which is enhanced by the full floating seat post. .
On top of the fuel tank we find from front to back: petrol tap control,  filling cap with primer, oil tank cap, oil pump and oil tap.
This rare early R-S Twin  has been finely restored and is finished in a brilliant colour combination of Sylvan Green with dark green panel and striping.