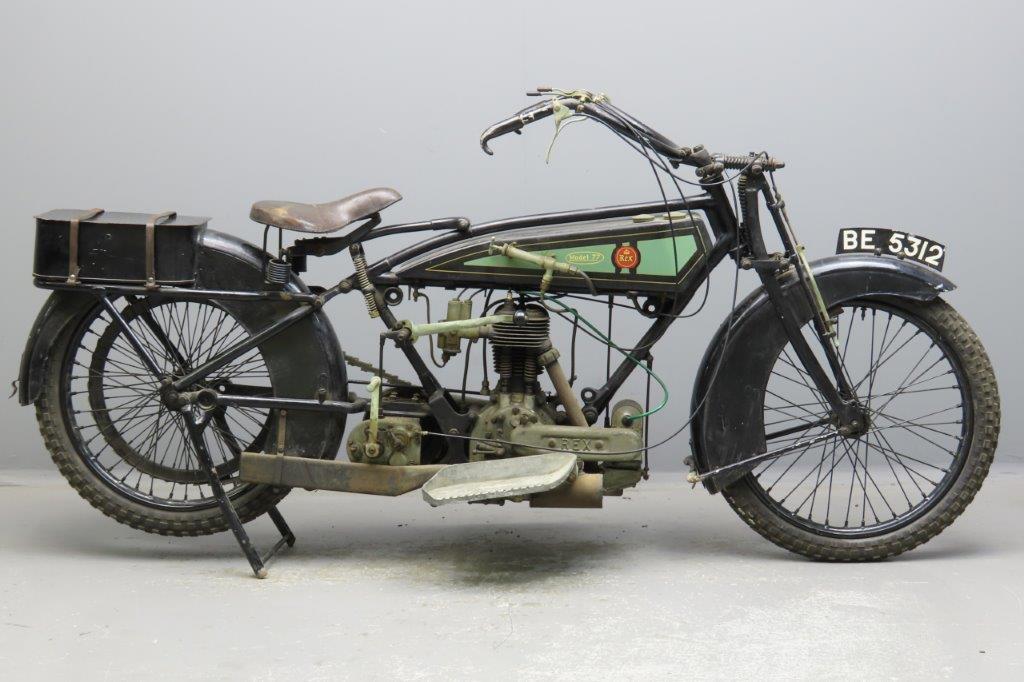 Harold Williamson (sales manager) and his brother Billy (managing director) had been with Rex from the early years and their advertising talents and salesmanship had made a profound effect on the company’s success.
In 1910 the brothers both left the firm after a boardroom row and with them went a lot of the company’s prestige.
Billy Williamson developed his own brand of motorcycle, the Williamson, powered by a specially made water-cooled Douglas flat twin.
Rex production soldiered on till the outbreak of World War one.
At the Olympia Show in November 1919 Rex was present with only one model, a newly-designed single cylinder “double purpose” machine, suitable for both solo and sidecar use.
Here’s an extract of its description in The Motor Cycle of November 27, 1919:
“Rex will long remain in the memory of old motor cyclists as one of the pioneer makes which did so much to develop the industry at a time when it appeared to be in danger of becoming extinct by the apathy of manufacturers’ generally concerning motor cycles some fifteen years ago.
The Rex reputation generally has been bound up more with twin-cylinder machines than with those of the single-cylinder type, and though the non-appearance of the twin cylinder Rex at the Show has no doubt been a source of disappointment to twin enthusiasts, the new single-cylinder model should, on the other hand, go far to revive the Rex name in the world of first class motor cycles.
Unlike the majority of single cylinders the new Rex engine has mechanical lubrication carried out more or less on car lines.
A large sump, which also forms a platform for the magneto, is part of the crank case, in which three pints of oil are carried, and this, in conjunction with the auxiliary oil compartment in the main tank, provides lubricant for approximately 500 miles. A worm-driven pump is fitted inside the sump.
Lubrication, in fact, appears to have been closely studied throughout the machine, and not least amongst the features of the framework may be mentioned the use of steel lugs and the large lubricator on the steering head.
This forms part of the head lug, and has a duct to the lower ball race.
The brake pedal lever also has a means of lubrication in the form of a screw-down grease cup, and the bearing which supports the separate belt wheel is lubricated by means of a similar grease cup located at the extremity of the outside back stay. Large lubricators are also fitted to the wheels.”
The sturdily constructed Model 77 has a large wheel base.
It comes with Bosch magneto, Sturmey-Archer 3 speed gearbox, aluminium footboards and Binks carburettor.
Notable features are also the “Turner” sprung saddle with original leather top and the roomy metal toolbox that is neatly integrated with the rear mudguard.
The Model 77 was only offered for the 1920 model year, in 1921 Rex switched to Blackburne-engined machines.
In the mid-seventies this very rare machine was acquired by Oliver Langton.
Langton was a renowned motorcycle competitor in the 1920s and 30s, representing England in Speedway, and competing in various other types of motorcycle sport.
He was also a collector of Rex machines, along with others, in addition to motor cars.
This REX currently features a matured restoration and is a re-discovered barn find .