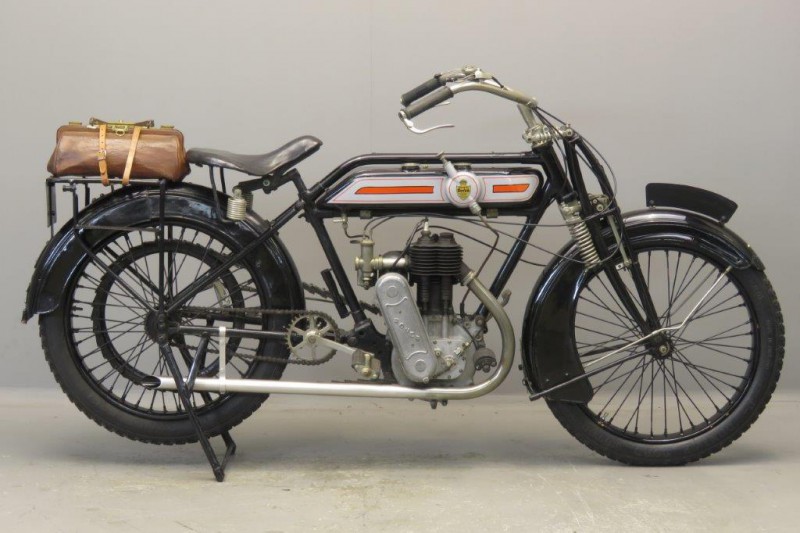 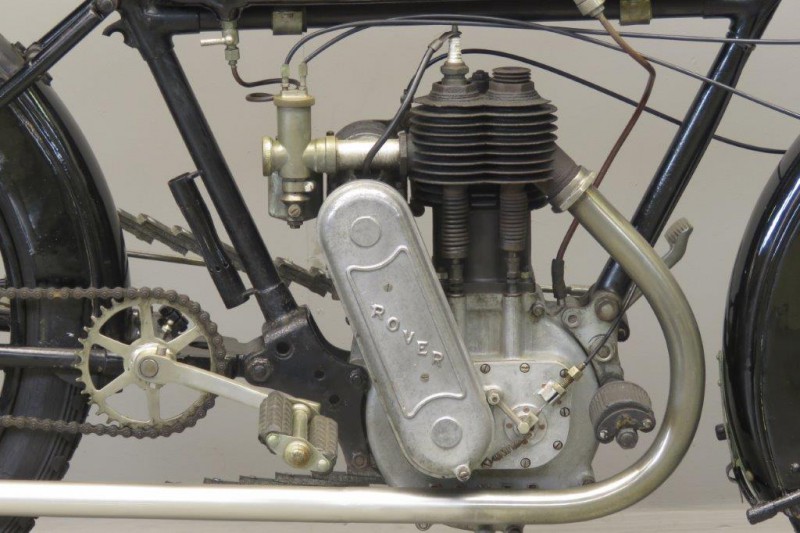 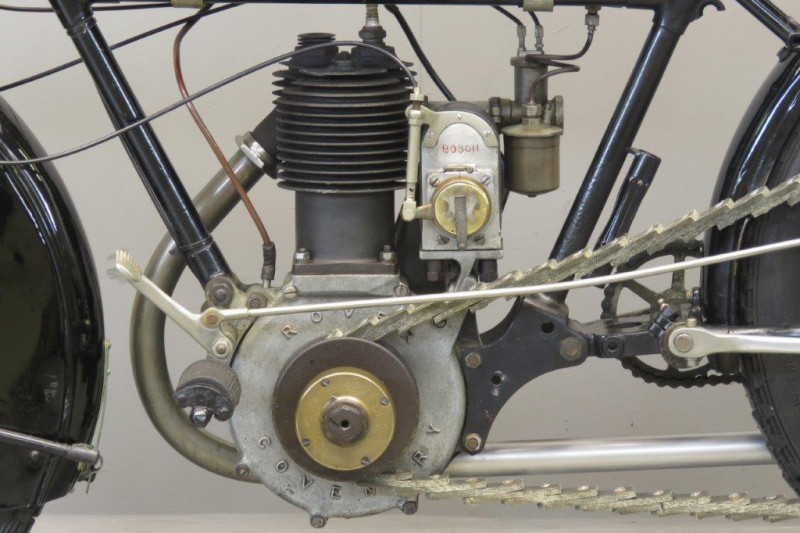 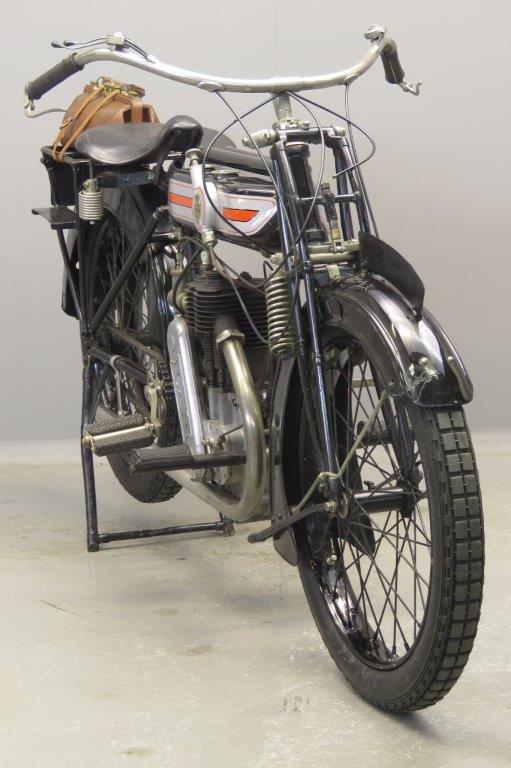 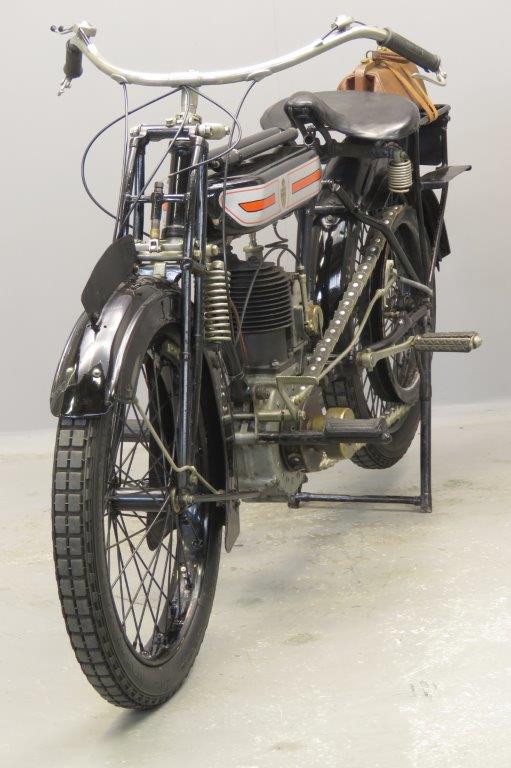 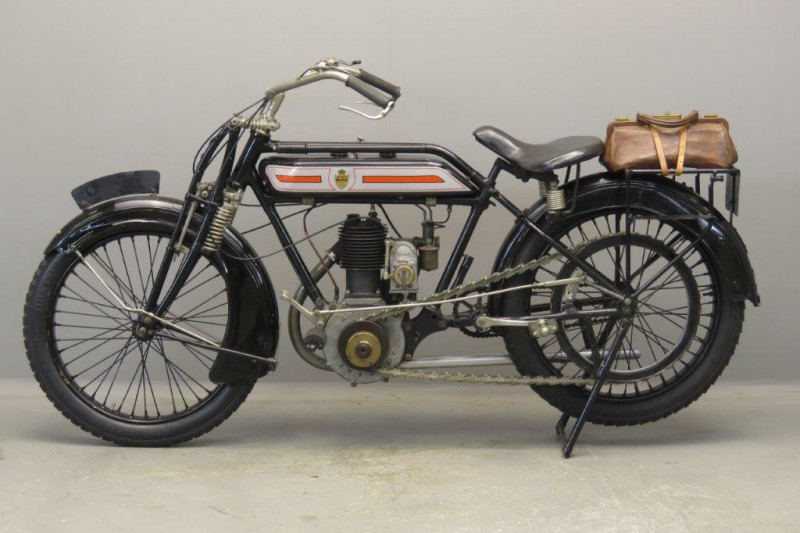 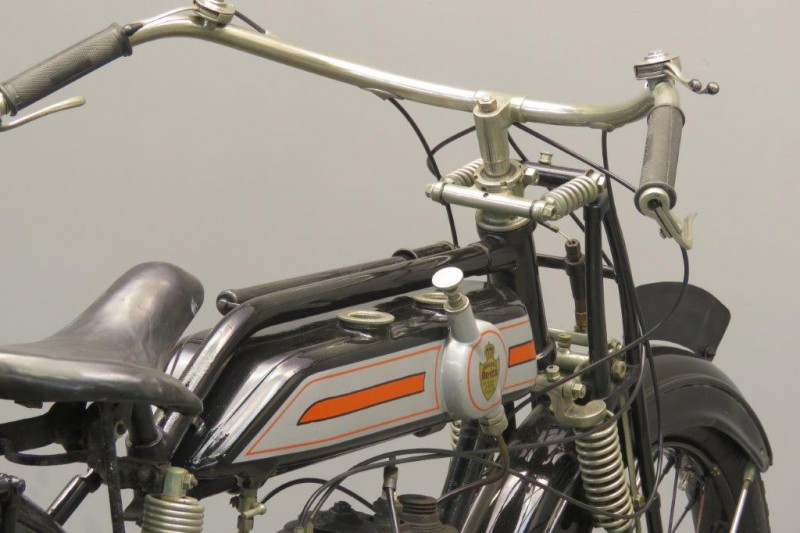 The Rover safety bicycle had created a breakthrough in bicycle design at the end of the 19th century.
At the end of 1903 the company presented its first motorcycle, which was much ahead of its time: a well- designed  side valve engine with mechanically operated valves, spray carburettor, strong frame with double front down tubes and excellent finish.
It created a lot of interest and a thousand or so were sold in 1904. However, in 1905 a serious slump in motorcycle sales started because public confidence in the motorcycle had waned considerably  due to the marketing of many inferior and badly engineered models.
Rover didn’t want to risk its good name and stopped motorcycle production entirely, to concentrate on the bicycle business.
In 1910 the motorcycle’s future seemed rosy again and designer John Greenwood   (later of Sunbeam fame) was commissioned to draw up a new engine.
The 85×88 engine had spring loaded tappets.
The Bosch  magneto was placed  high and dry behind the cylinder barrel and it was driven by a silent “ inverted tooth” chain.
Carburettor was by Brown & Barlow and Druid spring forks were fitted.
The new model appeared at the Olympia show at the end of 1910.
Some 500 machines of the 1910/1911 type were sold and in the 1912 model hardly any changes were made, proving the initial design had been good.
For 1913 the most notable new features were  a new frame layout with dropped top tube and a separate cylindrical oil tank that was inserted in the petrol tank.
It protruded on the offside of the machine and gave the typical bulge that became a hallmark for the Rover make.
For 1914 the front forks were fitted with horizontal top springs, the petrol tank got a slightly tapered shape to make more room for the rider’s legs and the mudguards were extended to the sides, to name  some notable new features.
There were three types of transmission  available: direct drive,  variable drive with adjustable Phillipson pulley  and  Sturmey Archer  3 speed hub. This older restoration is fitted with the variable drive Phillipson pulley; inside the device is a powerful spring that automatically lowers the gear when the engine has to pull harder on steep roads or hills.