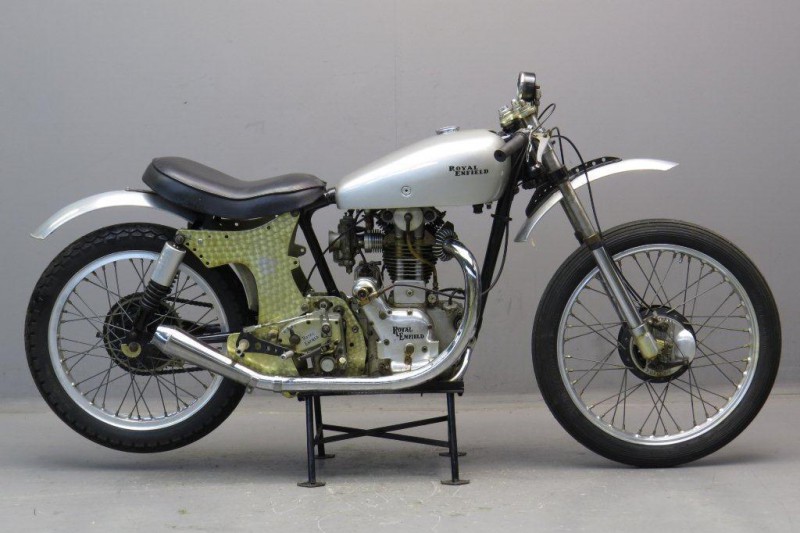 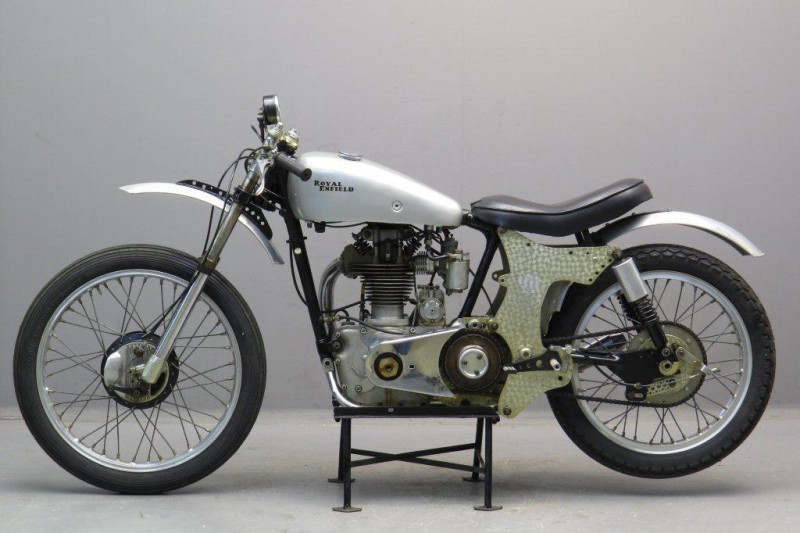 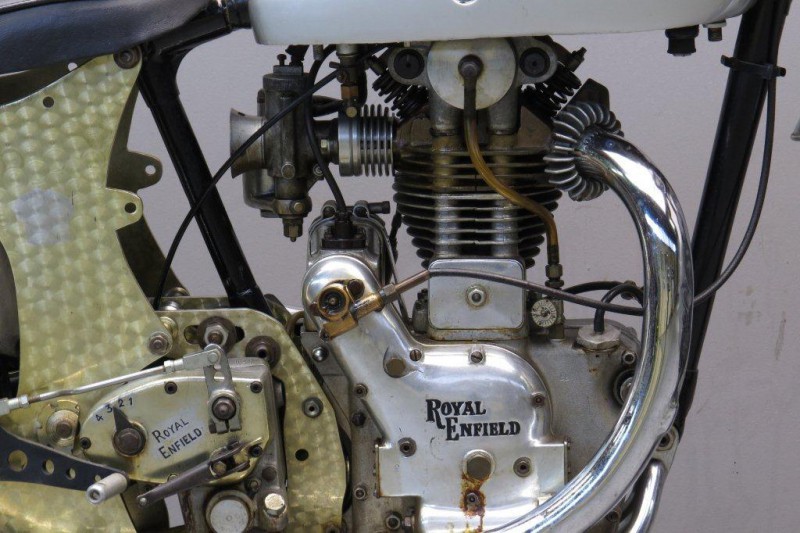 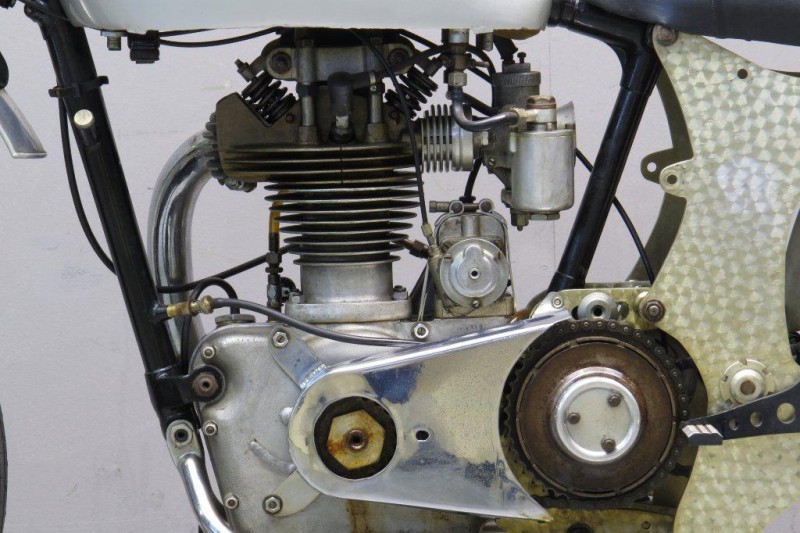 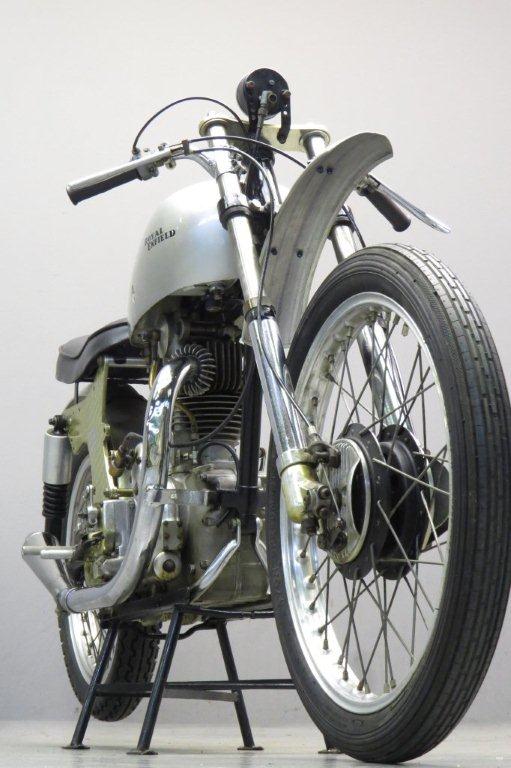 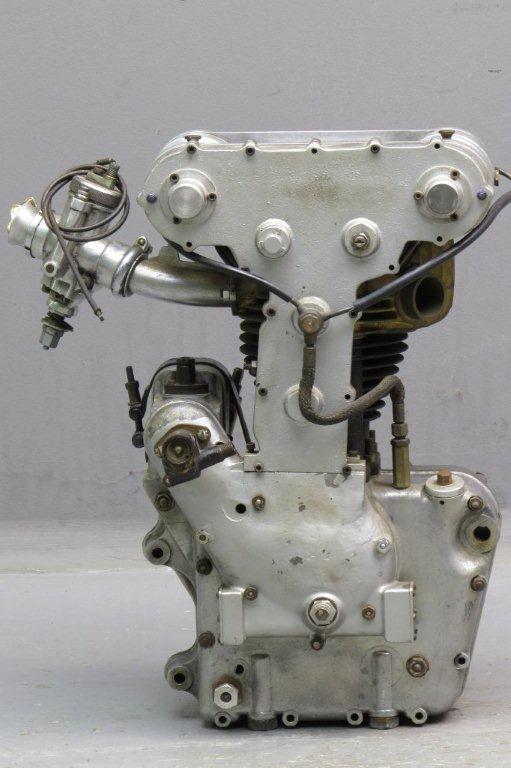 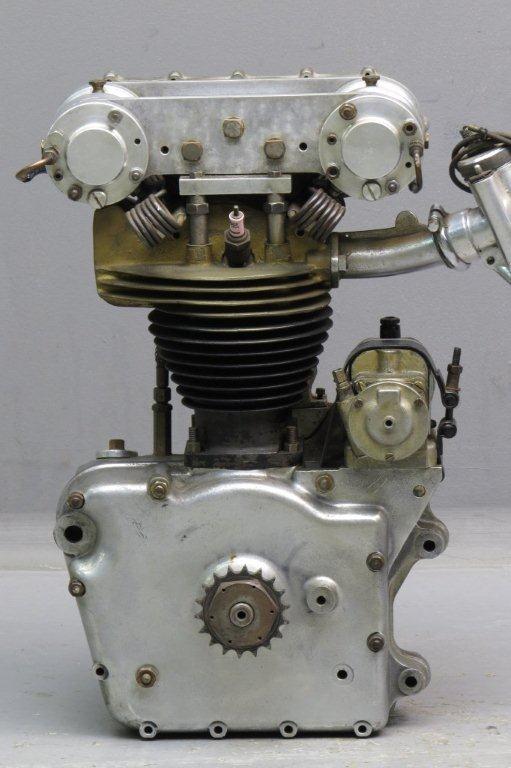 Twice World Champion for Moto Guzzi in the 350cc class (1955 and 1956), Bill Lomas built this Royal Enfield racer in the late 1940s.
The machine consists of a pre-war frame, converted to swinging arm rear suspension in 1948, and a 250cc overhead-valve engine that Bill developed while working for Royal Enfield.
Bill won the Cadwell Park 250cc Championship with this machine in 1948, ’49 and ’50, and his excellent results at the Lincolnshire track and other British circuits led to offers of rides in Grands Prix and at the Isle of Man TT.

Recognising the pushrod engine’s limitations, in 1949 Bill had designed and built a twin-cam cylinder head for the Enfield, inspired by the 250 Benelli. |
Having spent his National Service in the REME, Bill then landed a job in Royal Enfield’s competitions department so was well qualified for the job.
Bill’s father had worked for McEvoy during the 1920s, and when the company went bust in 1939 he had acquired a 1938 Royal Enfield 250 from Michael McEvoy.
It was this machine that would later form the basis of the ‘cammy’ special, though by the time of its creation Bill was no longer working for the Redditch factory.
In its first incarnation the 250 Enfield was raced with a 350cc JAP engine and Matchless telescopic forks.

When he came to design the twin-cam engine, Bill kept the Enfield bottom end and chose chain drive for the camshafts on the grounds of cheapness. |
He incorporated a number of interesting features including rotating tappets and oil jet lubrication for the cams, and added a large-capacity external oil tank, supplementing the two-pint sump.
Bill’s father Harry worked at Rolls-Royce in Derby, and scrapped Merlin pistons were melted down to cast the timing cases, Bill having made the wooden patterns himself (included ).
Turning his attention to the cycle parts, Bill cut out two large Duralumin plates, which were bolted on in place of the original rigid rear sub-frame and served as mounts for the swinging arm and suspension units.
A second 6" drum brake, added to the front hub to create a double-sided unit, provided the increased braking power required.
This arrangement was later copied by Royal Enfield.
The use of an Albion racing gearbox meant that there was never any shortage of alternative gear ratios.
As developed by Bill, the 250 Enfield pushrod motor developed a maximum of 23bhp at 7,800rpm on pump fuel, an excellent performance for such an engine at that time.
The twin-cam version was only slightly more powerful but had the advantage of revving safely to 8,500rpm.

The Lomas ‘double knocker’ first raced at Ansty on 1st April 1950, finishing 2nd, and scored its first race win, at Brough, on Good Friday.
It won again at Cadwell Park on Easter Monday but by this time Bill had attracted Velocette’s attention, and with works rides available on the Hall Green bikes he put the 250 Enfield into storage.
The machine was later refitted with the pushrod engine and loaned to other riders including Alf Briggs, Dennis Jones, Doug Allen and John Cooper.

Restored by Bill Lomas in 1979 and currently fitted with the pushrod engine, this historic racing motorcycle is offered with the original twin-cam motor and two Louth & DMCC trophies dating from 1948 and 1949 respectively.