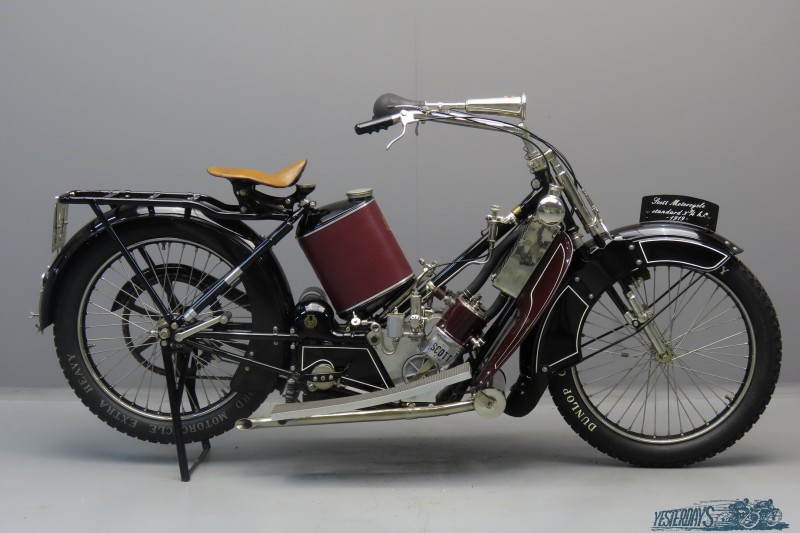 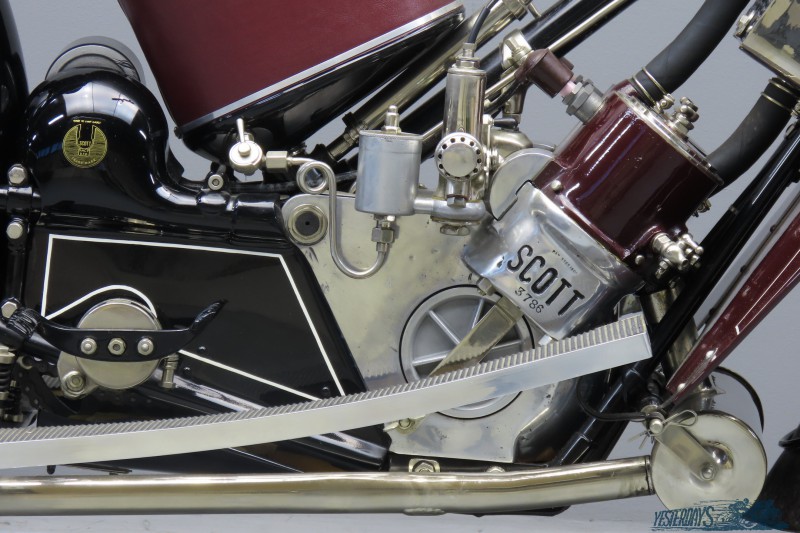 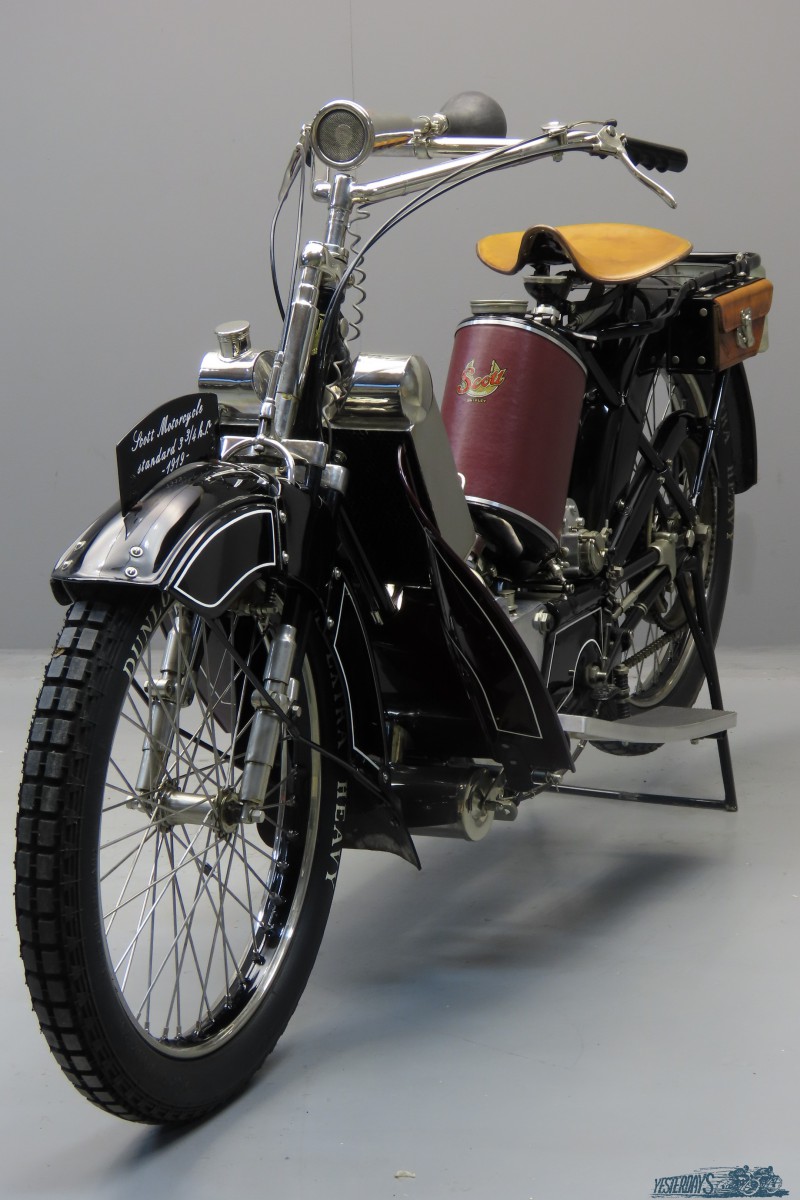 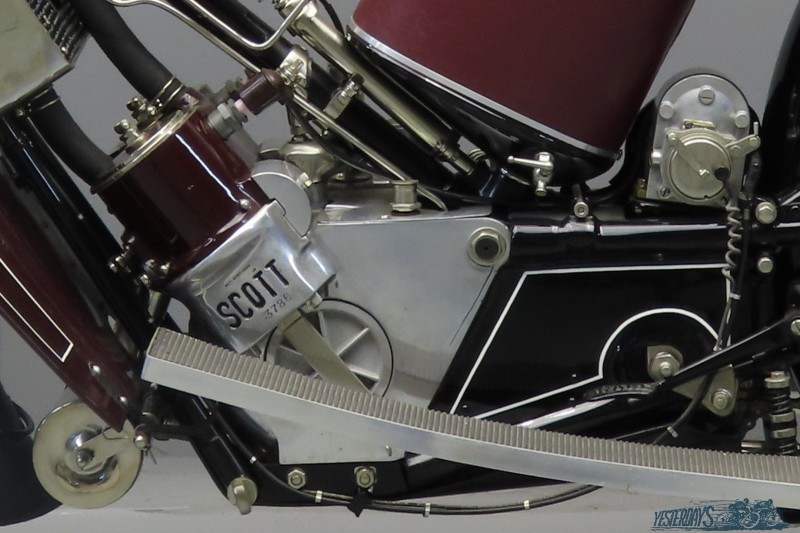 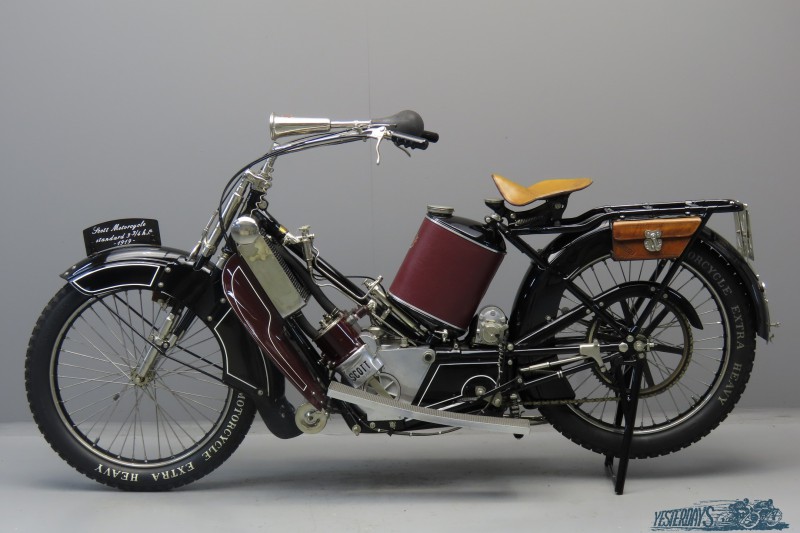 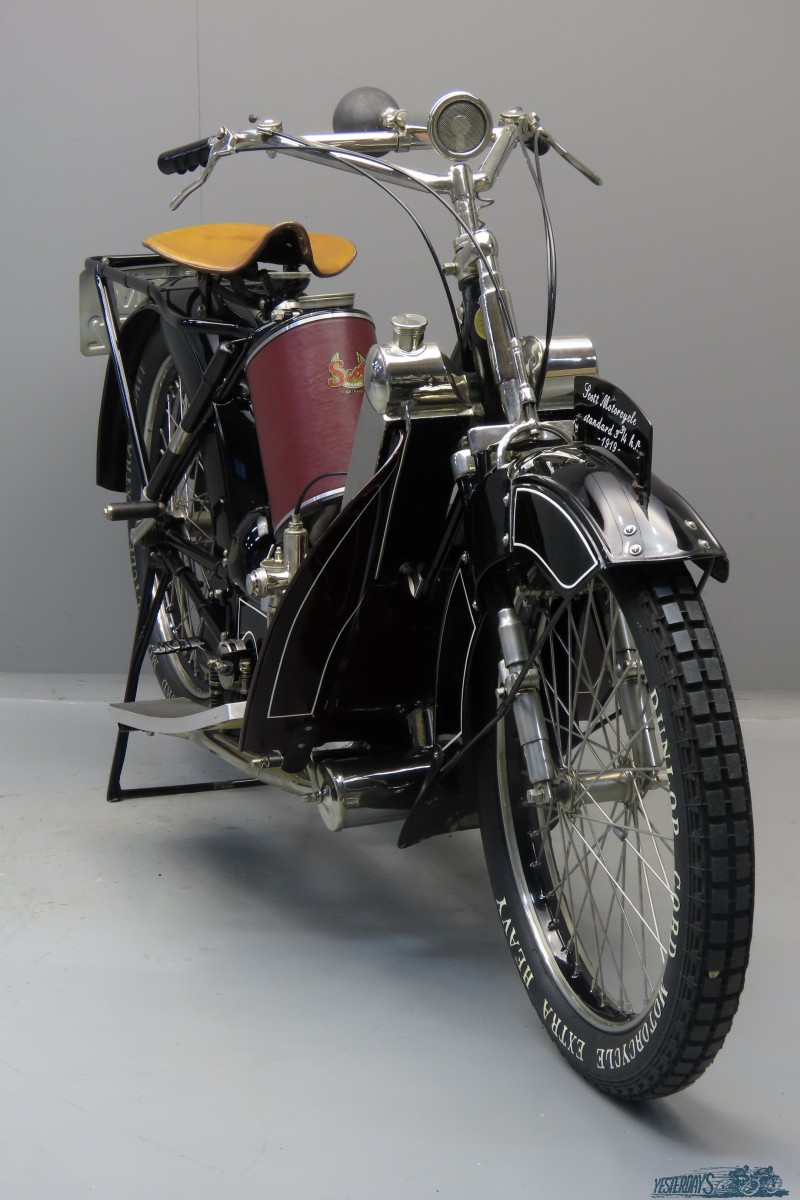 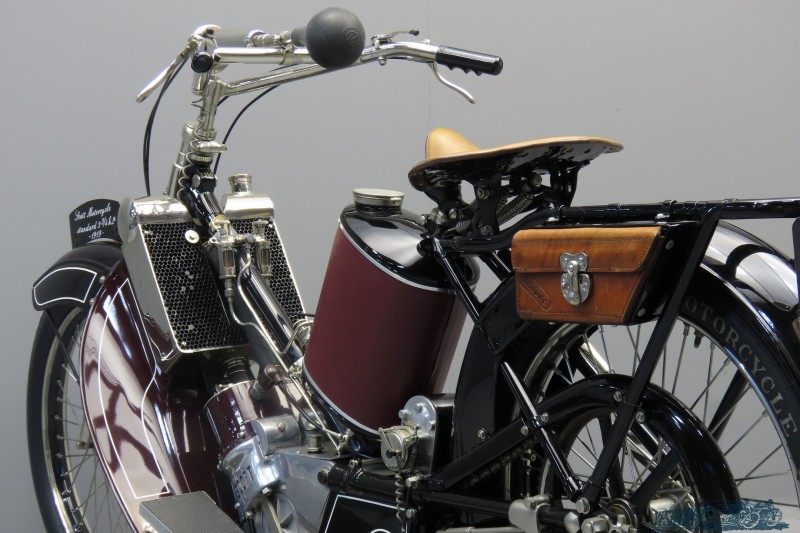 Alfred Scott, a gifted Yorkshire engineering genius, started experimenting with twin cylinder two-stroke power around the year 1900, when he mounted his little air-cooled twin in front of the steering head of his Premier bicycle. He kept on refining his design and by 1910 the open-framed machine, so much different from standard motorcycle practice, was attracting more and more attention. In 1912 Frank Applebee led the Senior TT race from start to finish on his Scott, averaging almost 50 mph over the bad roads in the island. It was the first TT win by a two-stroke. This feat was repeated the next year when Tim Wood won on a Scott. From 1922 on Scotts would be available in several cubic capacities, but in 1919 only the 532 cc machine with bore and stroke of 73x 63.5 mm was available. A quote from the introduction to the 1919/1920 sales catalogue: “The Scott is in a class by itself. THE ONLY MOTOR BICYCLE FOR ALL PERSONS – FOR ALL PURPOSES. For example. As a SPEEDMOUNT, the Scott is notorious for its exceptional power on hills and can more than hold its own with engines of the same capacity, as shown in the T.T. race when the Scott, with the smallest capacity on the list, made the two quickest laps in the race. FOR ALL WEATHER RIDING, its immunity from side slip, its protection from mud, and proved reliability, are all essential for serious winter work.” In their day, Scotts were highly regarded and had an enviable record in the long distance reliability events that were so popular in the 1920’s, and today in vintage circles they are highly prized for their excellent handling and for their impressive turn of speed which would put to shame many a comparable machine of later vintage.
The machine we present here has spent most of its life in The Netherlands. It was first owned by a Mr Pieter Vermeer Junior in Rotterdam and later moved to an owner in The Hague. Many years later the Scott ended up in an antique dealer’s place in big lumps and was bought by an enthusiast who commissioned a specialist to carry out a no-expense-spared restoration that took place in 1992-1993. With the machine comes an exceptionally extensive restoration file. More than 600 hours were put in the process and a total of more than 3000 km were driven by the restorer. The total cost amounted to more than 20,000 guilders at the time, the equivalent of almost 20,000 euros nowadays. The file also contains some pre-restoration photos, many photos taken during the restoration process, photostat copies of 1919-1920 catalogue, instructions and spare parts list. A good example of the very high quality of the restoration is the finish of the leather faced toolbox. The machine comes with kick starter, Thomson Bennett magneto with handlebar-mounted cut-out, XL-all saddle, bulb horn, tyre pump and Binks carburettor. An interesting detail is the brass carburettor cover with the text “Burlage Holland”; this company probably was the Dutch importer of Binks carburettors. As far as we are aware this excellently restored Scott has been on display in a private collection and hasn’t been ridden since she was restored in 1993.