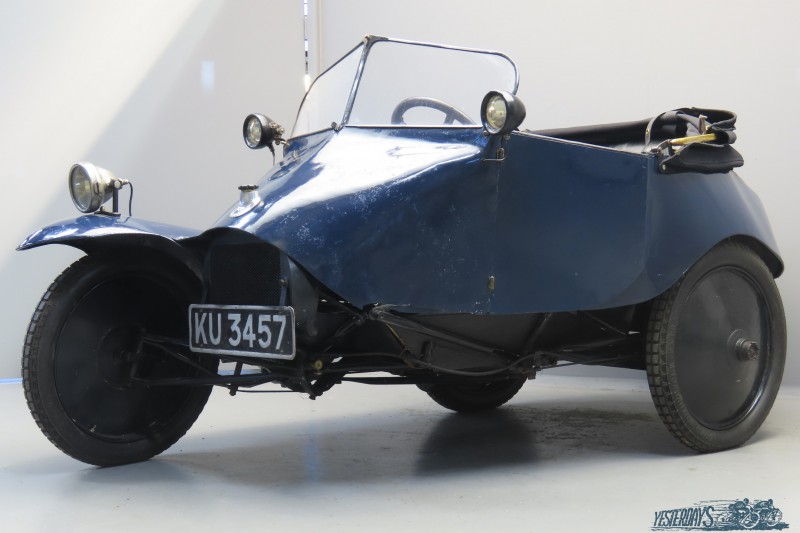 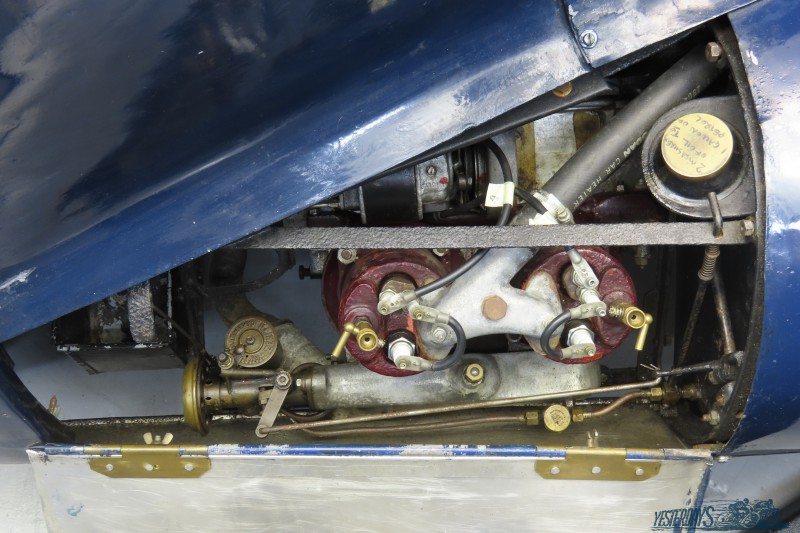 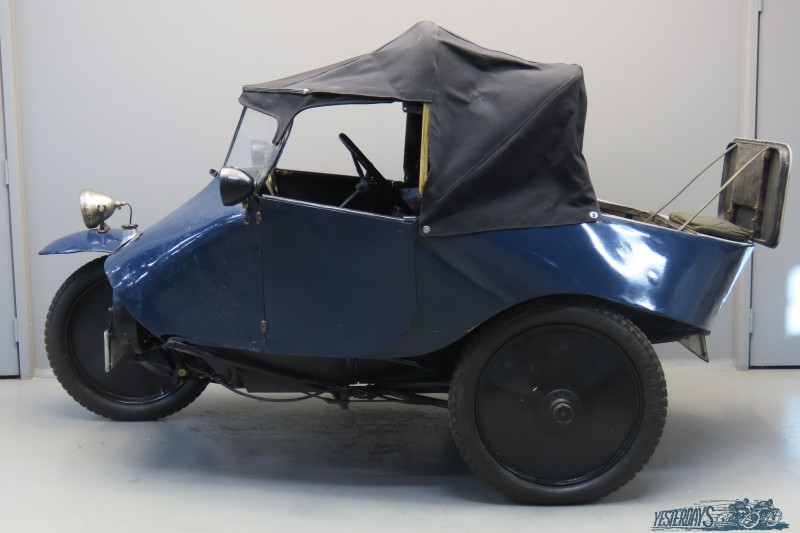 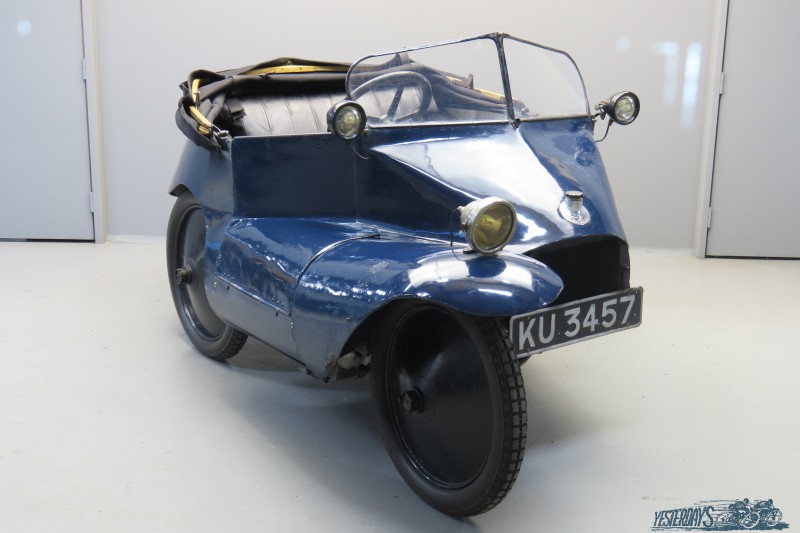 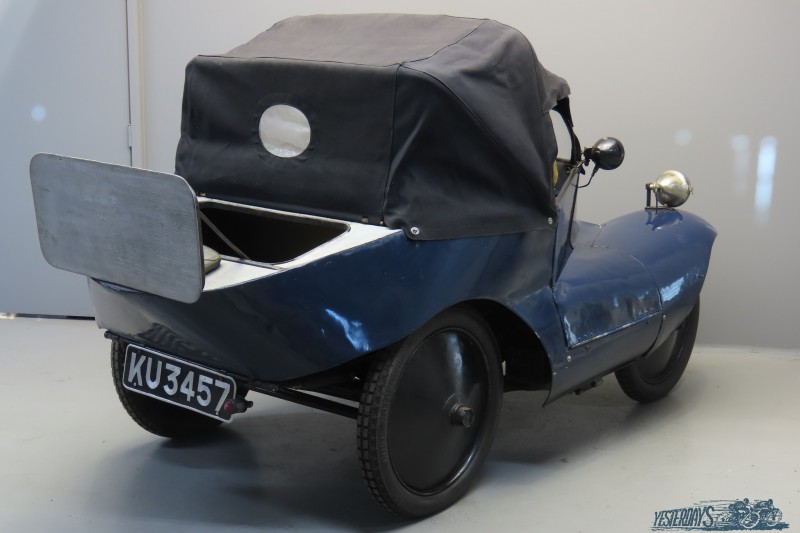 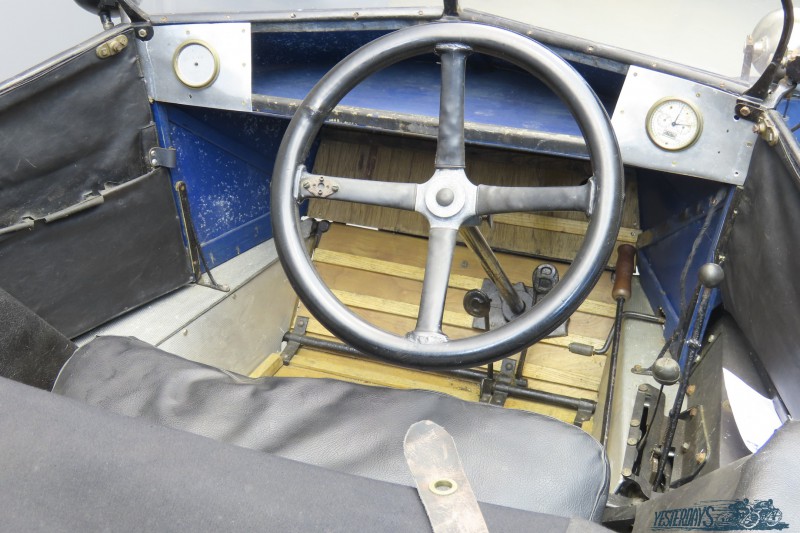 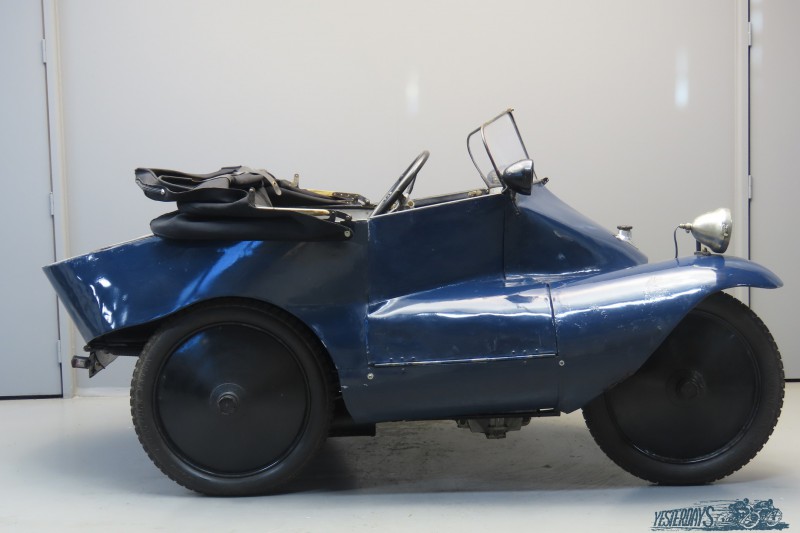 Scott 1924 “Sociable” 578cc water cooled two stroke twin three wheeler frame & engine # 322
The Scott Sociable was manufactured from 1921 to 1925 by the Scott Autocar Company of Bradford, Yorkshire, an offshoot of the Scott Motorcycle Company. During World War I Alfred Angas Scott had made sidecar machine gun carriers. From these he developed a three-wheel car with two wheels in line and a third one set alongside but slightly behind the other rear wheel, all supported by a triangulated tubular steel frame. It was first produced early in 1915 and was intended for motor machine-gun service. Although the layout still resembled that of a motorcycle and sidecar combination, it had wheel steering by rack and pinion. Its power was supplied by the company’s own water-cooled 578 cc twin-cylinder two-stroke engine with drive transmitted through a three-speed gearbox to the offside rear wheel by a shaft. There was no reverse gear. Turning at speed could be a tricky manoeuvre. Three experimental models were made but orders failed to come, so he converted it to civilian use and announced it in 1916 as the Sociable. Because of the war production had to wait until 1921. Production stopped in 1924; complete cars cost £273 in 1921 falling to £135 by 1924.
The 1923 brochure explains extensively the many advantages of the Sociable. A few quotes: “The Scott Sociable is a development of the side-car combination. It retains all the best features of the two-track, three-wheeled outfit (…) and, in addition, eliminates the drawbacks of the side-car combination by providing comfort, sociability and complete weather protection for both passenger and driver. The even torque of the twin-cylinder two stroke engine (equivalent to that of a four cylinder four-stroke) coupled with the enjoyment of extensive and luxurious springing, encourages the maintenance of higher average speeds than would be tolerable for any length of time with the excessive saddle jolts and persistent valve clatter from the exposed engine of the ordinary high-powered side-car combination, or with the inefficient springing and lifeless upholstery of the average light car. (…) The necessity for periodical adjustments and replacements is reduced to a minimum. There are no valves to grind, no tappets to adjust, no chains or belts to tighten or replace, no control wires, rim brake blocks etc. to keep in order. Four to five thousand miles can be covered before decarbonising becomes advisable.“
The Classic Motorcycle of December 1984 and January 1989 contain articles on two Sociables, SS1922 and KU2772. A copy of these articles with lots of technical and road-test information is on file. The Sociable can accommodate a driver and a passenger next to him, but a third person can have a ride in the dickey seat that doubles as a luggage compartment. To start the engine from his seat, the driver has to reach down and open the fuel tap. After flooding the carburettor he has to give a sharp tug on the starting lever that is situated inside the car. The controls are conventional car-type; “C” cast into the clutch pedal and “B” cast into the brake panel. The throttle pedal sticks out through the right hand panel and also the gearchange gate and lever are on the driver’s side. Not many Sociables have been produced: estimates vary from 50 to 200. Currently six survivors are known.
This technically and aesthetically out-of-the-box vehicle was first registered on March 12, 1924 and is finished in Azure Blue (the other colour option was Grey). She comes with Bonniksen speedometer and is an older restoration with a charming patina. There’s an extensive information file available with photostat copies of instruction book and brochures. She is road-registered, has been ridden regularly on vintage events and, understandably, attracted a lot of attention.