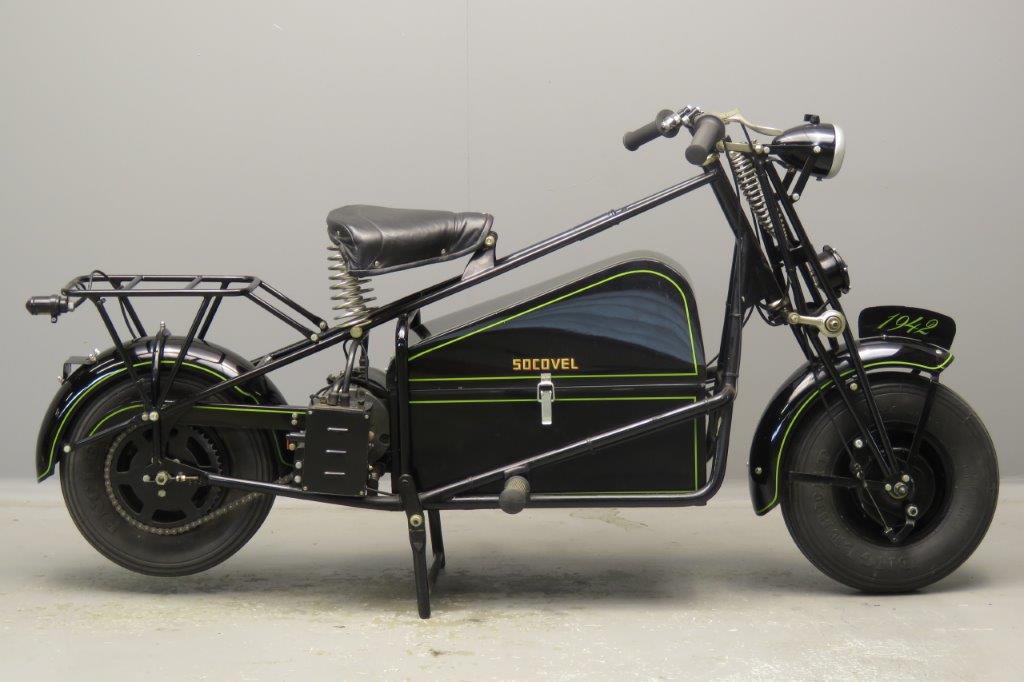 The  Socovel company was founded on March 4th 1941 by the brothers Maurice and Albert de Limette in Brussels.
That year, Maurice  had been hospitalised for a long period of time following a serious car accident.
During this forced rest he  had worked on the design of  an electric motorcycle, which would solve  the problems linked to petrol rationing during the German occupation.

The Socovel name stood for Société pour  l’Etude et la Construction de Véhicules électriques, which translates as Company for Study and Construction of Electrical Vehicles.
The two brothers worked well together, as Maurice was an engineer and Albert was a businessman.

The Limette brothers first had to obtain authorisation for production from the Germans.
They got permission to build 500 machines and in June 1941, 15 electric motorcycles were produced and sold immediately.
In 1942, Socovel managed to sell 400 motorcycles in spite of their high sales price and the difficulties the company had to get enough supplies of batteries and electric motors.
The parts came from various manufacturers: ACEC and Moës  provided the motors, Prest-o-Lite and Tudor the batteries and the frames were made by a company in Liège.
Various other firms provided parts  such as wheels, mudguards, battery compartment sheet metal  and other sundry parts.
The bikes were assembled at the company’s premises  at  16,  Rue du Magistrat in Brussels.

The Germans were interested in  Socovels to use them  as ferrying vehicles on their airfields, but  the company’s reluctance to supply the  occupying army was so strong that the order was never fulfilled.
Civilian sales continued in 1943 and 1944 but  frame numbers were used more often and kept below 500 to stay within the numbers they had permission for.
When petrol was once again available after the liberation Socovel altered their production scheme to concentrate on 123cc Villiers two-stroke engines for their first post-war motorcycles.
The  electric model was still available after the war but not many were sold and it is said  that the company   had to scrap  80 unsold electric  Socovels in the early fifties.
Top speed of the Socovel was about 25 km per hour, its  range about 50 kilometres and the recharging time amounted to 10 hours.
This rare specimen of a very early electric motorcycle has been restored and  runs as it should.