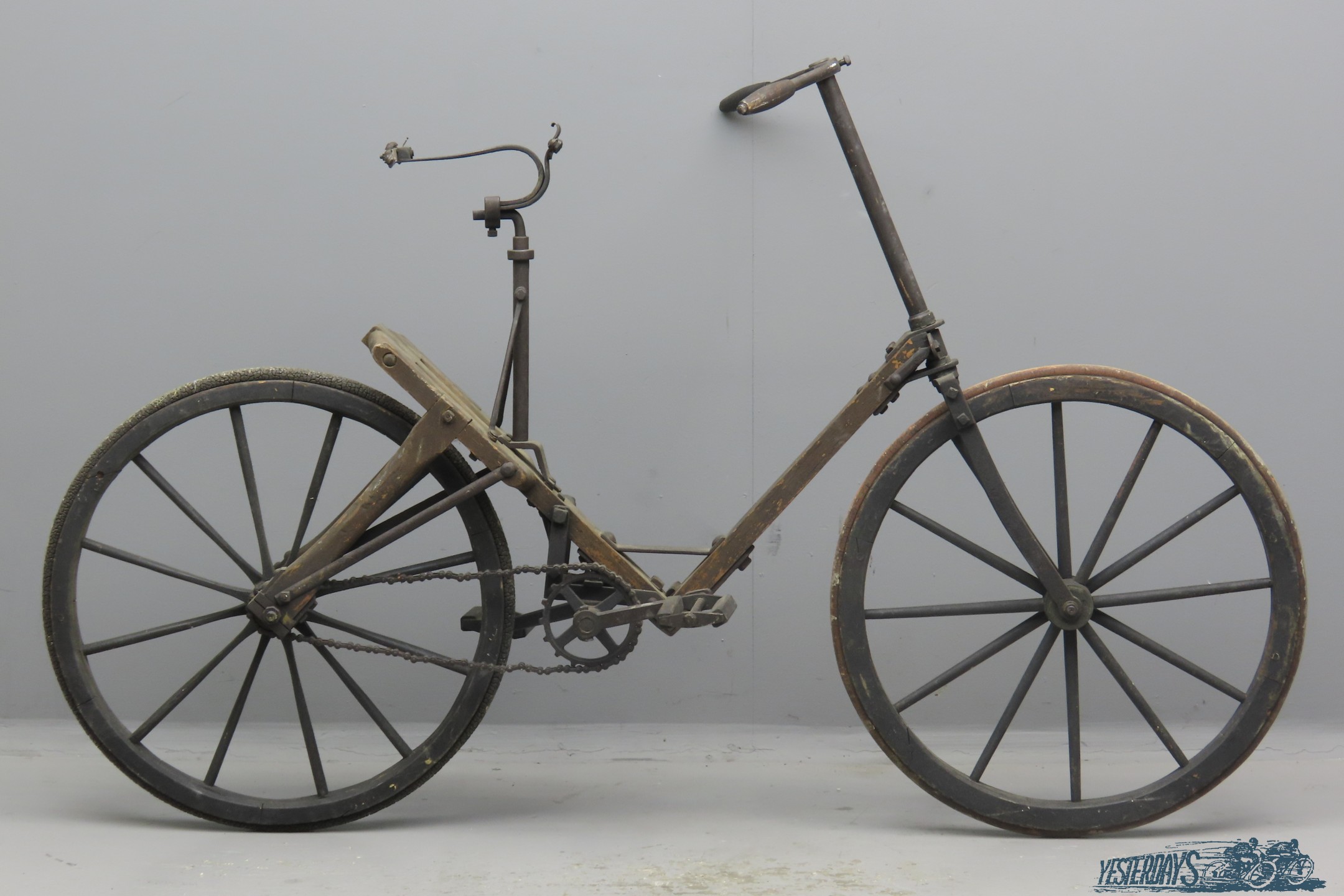 This intriguing artisanal wooden bicycle is an interesting object.
The wheels have a diameter of ca. 25“ and come with solid rubber tyres.
The solid metal handlebar has a width of 80cm and the saddle height amounts to ca. 92 cm.
Accompanying documents include a probably 1930s newspaper clipping (see photo) which states that the bicycle won second prize at the 1904 St. Louis World’s Fair.
The caption also states that the bicycle was built 115 years ago, that would be around 1820; we gather the bicycle was made around 1894.
An accompanying handwritten note from 1936 was recopied in 1960 and states that the bicycle was the property of John Roberts of Huntington.
He received the cycle from a man called Kurt Wilson as payment for moving household goods for him.
Wilson claimed that the bicycle had been built by his father.
Apparently John Roberts had written the original note in 1936.
He died in 1945 and the antique bicycle became the property of his widow Myrtle, who had found it wise to recopy the deteriorated note from 1936.
This 1904 Fair was quite a thing: In April 1904, St. Louis opened its doors to the world for what was officially called the Louisiana Purchase Exposition, but was widely known as the St. Louis World’s Fair. Millions of dollars had been spent to build the 1,200-acre fairgrounds and its nearly 1,500 buildings—a huge scale that ended up delaying the opening by a year.
During the eight months the fair stayed open, nearly 20 million people paid a visit.
On display were marvels of technology, agriculture, art, and history, and there were amusement rides and entertainment to be found in a section called “the Pike.” The fair introduced a huge audience to some relatively new inventions such as private automobiles, outdoor electric lighting, and the X-ray machine—as well as foods from across the United States and around the world. The exposition also had a focus on anthropological exhibits—with an approach that is shocking by today’s standards: In some cases, organizers brought people from the Philippines, the Arctic, and elsewhere to the fairgrounds as set pieces among re-creations of their home environment or villages.
After the fair closed, nearly all of its structures were demolished within a short time, leaving only a few footprints, ponds, and canals in Forest Park in St. Louis. (source: www.theatlantic.com)
Next to the newspaper clipping and the handwritten note there are three photos of the bicycle taken at various moments in the past.
This fascinating piece of history appears to have been stored under favourable conditions and is in remarkable good shape, only missing its leather saddle top.