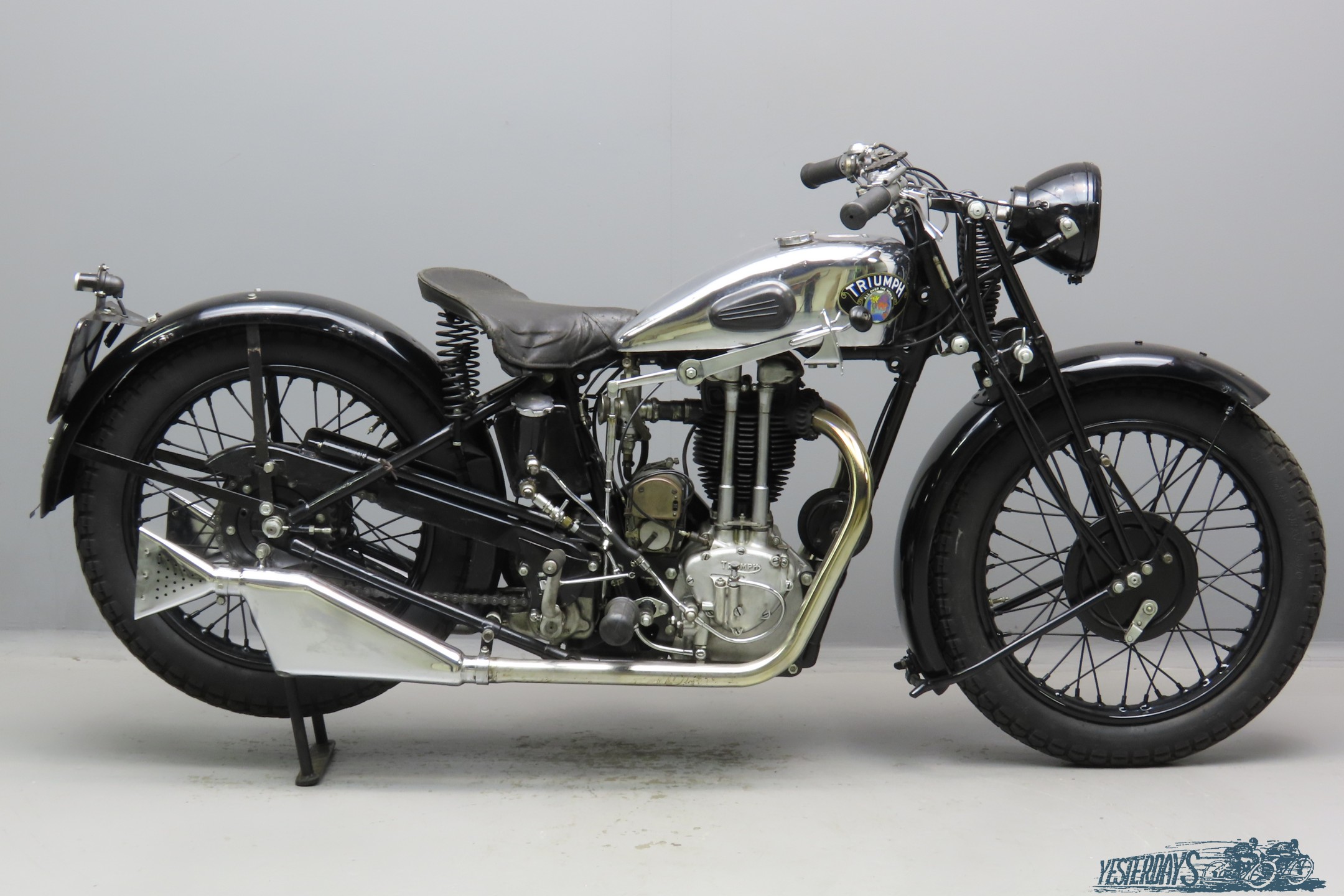 The mid-1920s were difficult times for the motorcycle industry but Triumph managed to get through with its very successful Model P.
By the late 1920s though, the company was being overtaken by the competition and it was definitely time for something different.
So in October 1928 an entirely new range of “C-Series” machines was presented in the form of the CO (348cc OHV) , CN (498cc SV) and CSD (550cc SV).
There were a number of features that were new for Triumph and the models were a vast step forward from the Triumphs which had previously been updates from a 1906 design.
The frames were of the cradle style holding the engine therein and the engines were Triumph’s first with a semi-dry sump circulating lubrication system, as opposed to the earlier total loss system. The three models shared frames and gearboxes.
For 1930 the C-Series range was added to with the 498cc Model CTT, a “sportsman’s machine” in every sense of the expression.
Like the CO it carried the Vincent Horsman designed head and it had the same 80x99mm bore x stroke dimensions as its predecessors, the famous TT and TS models of 1927-1929.
Unfortunately the CTT was born into a trade depressed world due to the American Wall Street Crash of 1929 and few were able to afford the luxury of this top-of-the-range machine.
Consequently few of these CTT models appear to have been manufactured. (source: Peter Cornelius “Triumph-The facts”).
This CTT was produced in September 1930 and first registered in Denmark on June 4th, 1931.
It changed hands in 1932 and stayed in one family for almost 90 years; the son of the second owner restored the machine in the 1990s and has used it regularly since.
The petrol tanks still has its original chrome finish and the Bosch electric lighting system has also been on the machine since it was new.
Ignition control is by the left-hand twistgrip; this was a feature of all 1930 Triumph models.
The original rear stand was missing, so a more modern replacement has been fitted.
Motor Cycling road tested the CTT and published the results in the issue of March 26, 1930.
A conclusion was: “It had been thoroughly tested and proved then that this new addition to the Triumph range was fast, very controllable, beautifully finished, admirably silenced, comfortable, “right” as regards the minor points of design and possessed several features which marked a definite advance in motorcycle design.
|What more could be expected?”
This sporty mount comes with information file comprising licencing documents, photostats of pre-war and post-war photos, invoices, BMS workshop instruction manual, Bosch electrics instructions, correspondence with Marque Specialist, sales information and Motor Cycling road test.