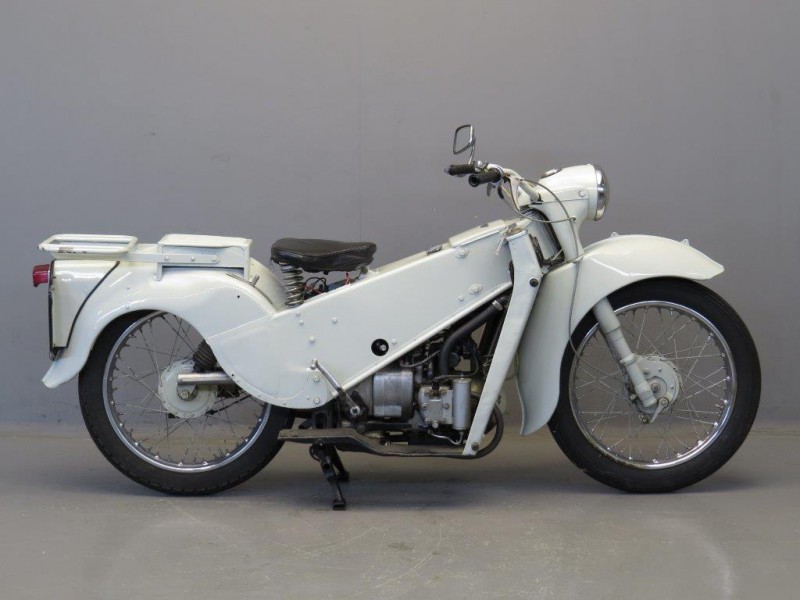 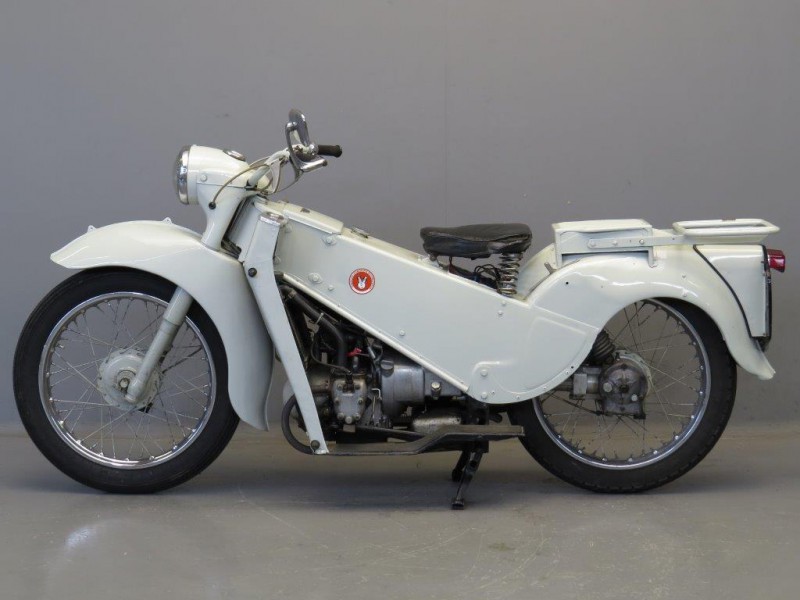 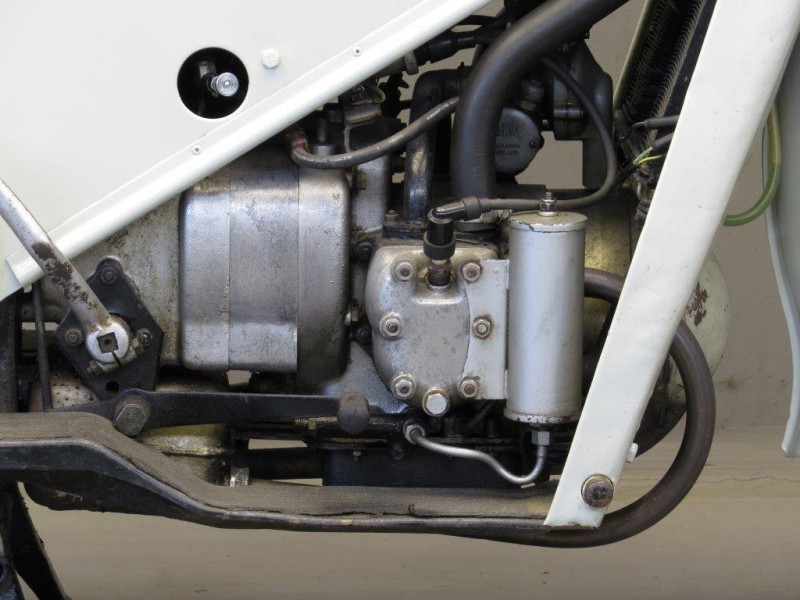 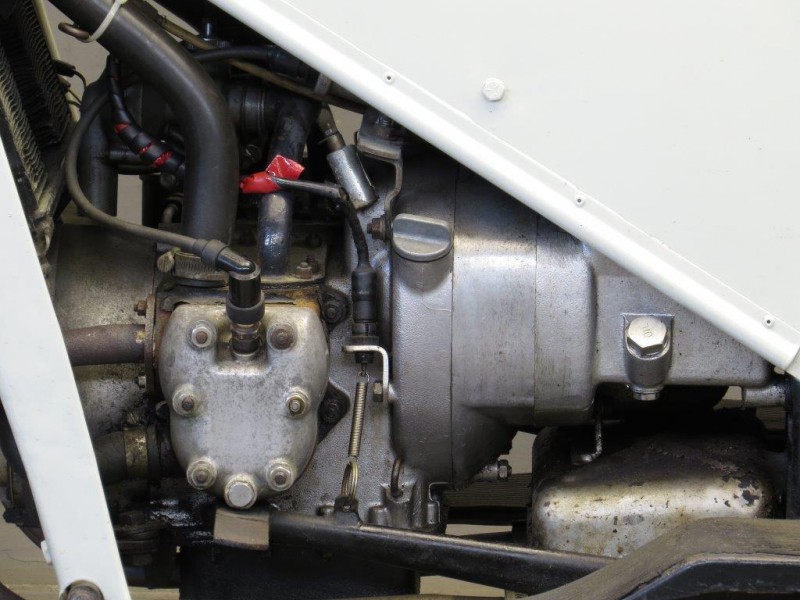 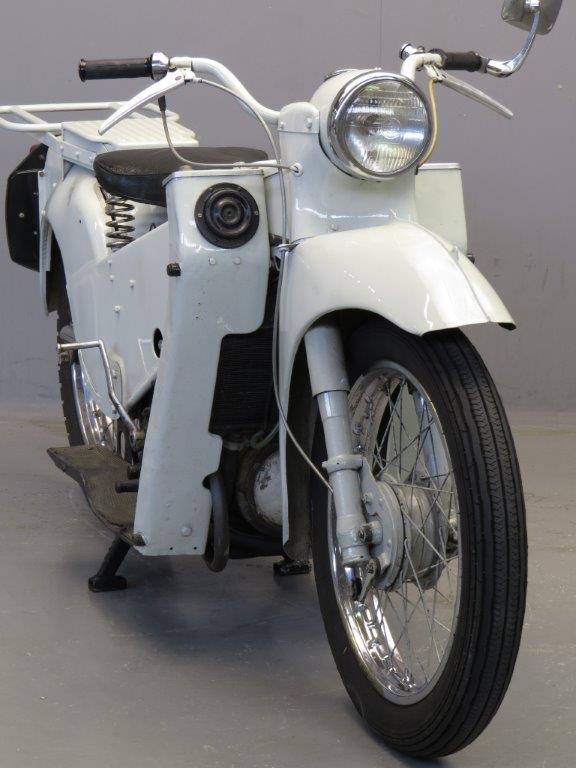 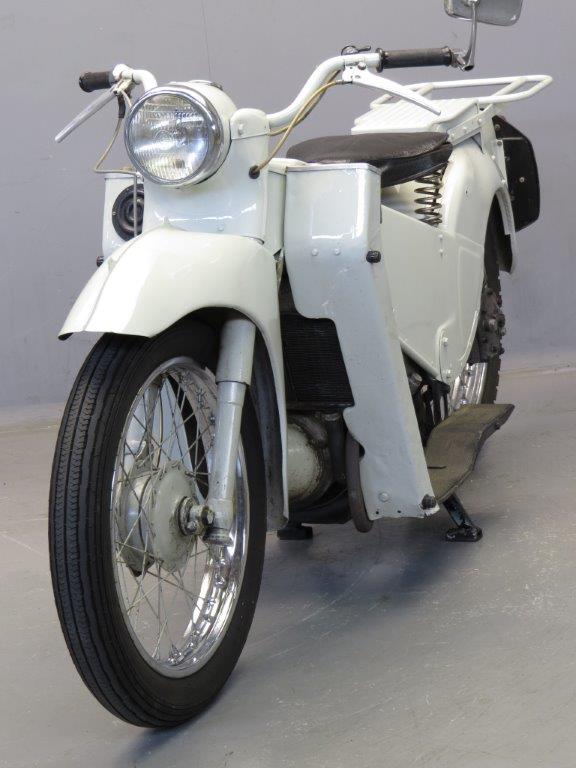 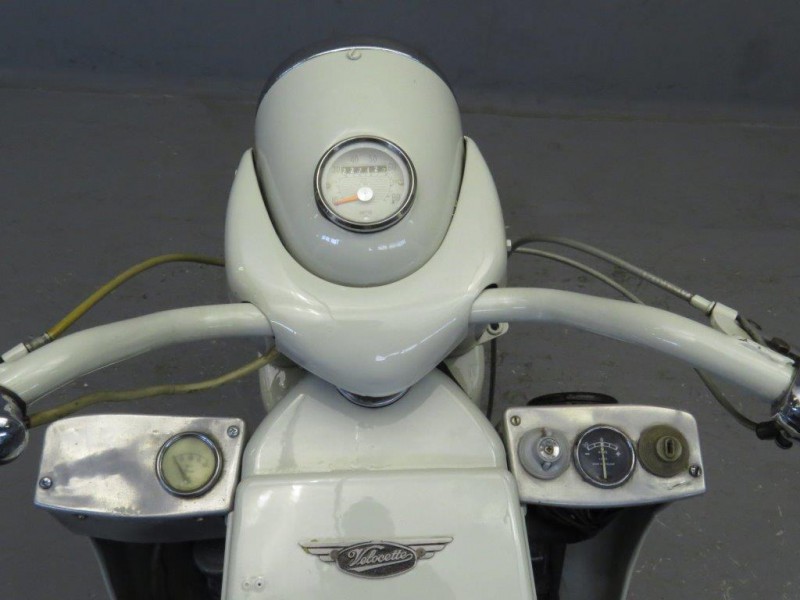 The Velocette LE was a motorcycle made by Velocette from 1948 to 1970.
The designation LE stood for "little engine".
Used by over fifty British Police forces in the UK. Production ended in 1970 when the company ran into financial problems and went into voluntary liquidation.
Velocette's Director, Eugene Goodman, planned an innovative and radical design that would appeal to a new market that needed cheap, clean and reliable transport.
Designer Charles Udall developed the Velocette LE as a "conceived-as-a-whole" design, with engine, gearbox, drive shaft and bevel box in a single unit to do a specific job.
The Velocette LE was launched in 1948 as the "Motorcycle for Everyman".
With a 150 cc four-stroke, water-cooled, horizontally opposed twin-cylinder engine, the LE also had a radiator and was fitted with coil ignition to help starting.
The three-speed gearbox, engine and clutch were contained in special castings, and final drive was by a shaft mounted in a swing frame with adjustable suspension.
Aluminium leg shields were designed to keep the rain off, and footboards gave it a scooter feel. Instruments included a speedometer and trip recorder.
To reduce noise and vibration, the engine was rubber mounted, and the pressed steel frame was lined with soundproofing felt.
The water-cooled engine was well silenced, and riders reported that sometimes they only knew the engine was running by checking the ignition light. Carrying capacity was boosted by quickly detachable panniers and a glove compartment in front of the petrol tank.
All this made the  LE expensive, at £126 compared with the BSA Bantam at £76.
The odd looks also meant that it did not appeal to the usual motorcycle buyer.
Launched in 1951 the Mk II had a 192 cc (11.7 cu in) engine, giving an extra 2 hp (1.5 kW), and strengthened bearings.
Sales remained poor, however, and the company had to reduce the price.
The clutch was upgraded, and an Amal 363 monobloc carburetor replaced the standard unit.
The rear swinging arm was uprated with cast aluminium to improve rigidity, and the brakes were improved.
The petrol tank capacity was also increased from 1.25 to 1.62 imperial gallons (5.7 to 7.4 litres; 1.50 to 1.95 US gallons). In 1958, Velocette launched the Mk III LE with a foot operated gear change and a conventional kick start.
An extra gear was added, together with 18-inch-diameter (460 mm) wheels.
The instrumentation was relocated to the head lamp, and the petrol capacity was increased from a meagre 1.25 to 1.62 imperial gallons (5.7 to 7.4 l; 1.50 to 1.95 US gal).
With ten years' development, the Velocette LE was more reliable and practical, but in 1970 the company went into voluntary liquidation.
Production of other motorcycles had been delayed or cancelled to produce the LE in various forms, and the lucrative police orders had dried up.
Kent County Constabulary purchased the remaining spare parts and were able to keep LE's running until 1974.
This machine has been regularly used for the last few years and with the customary safety checks she is ready for the road.