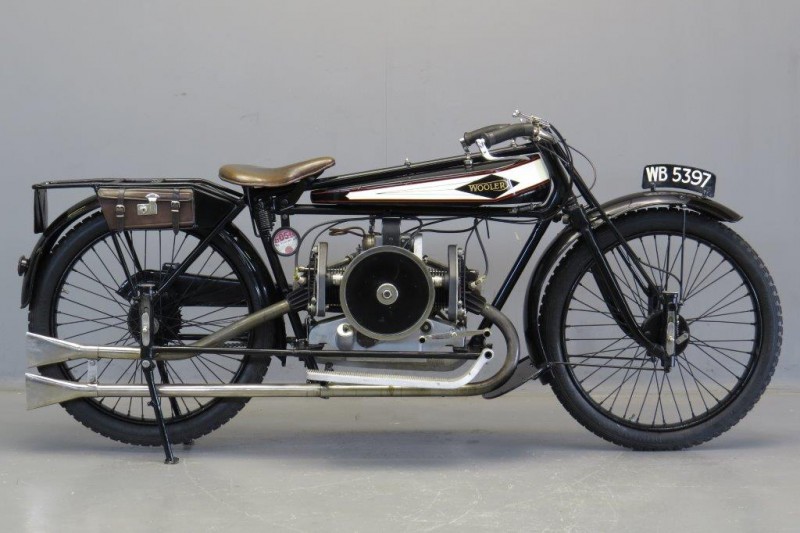 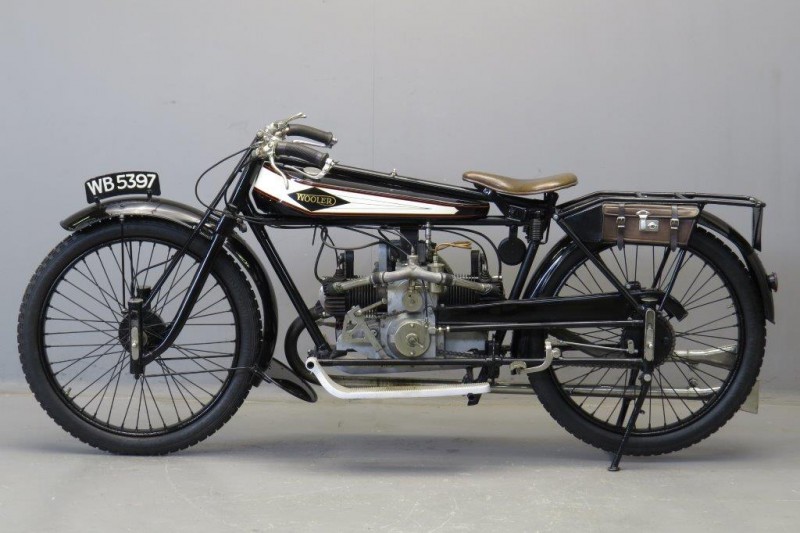 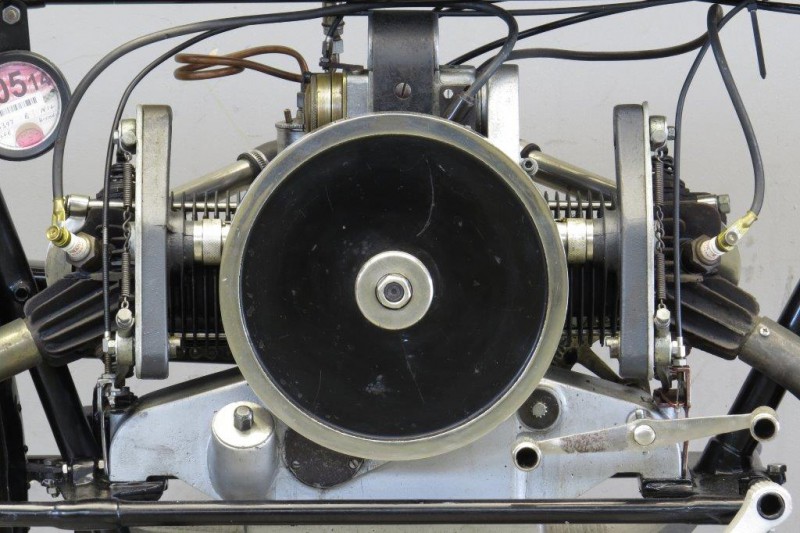 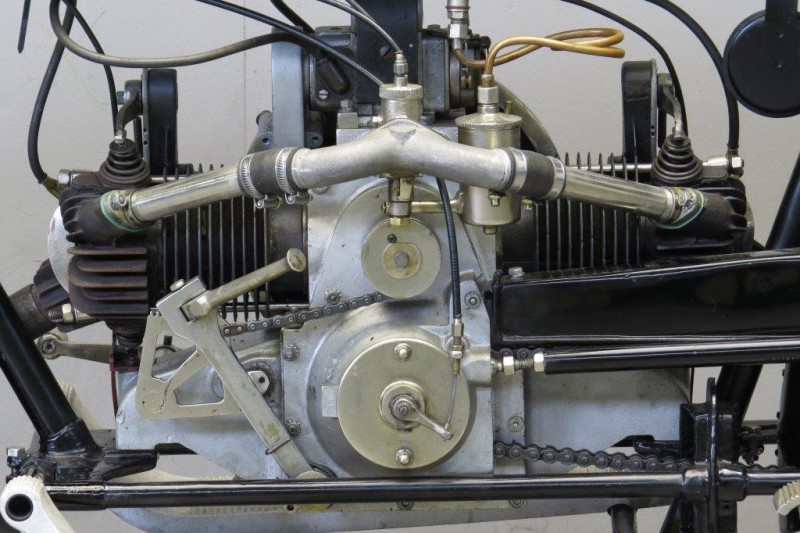 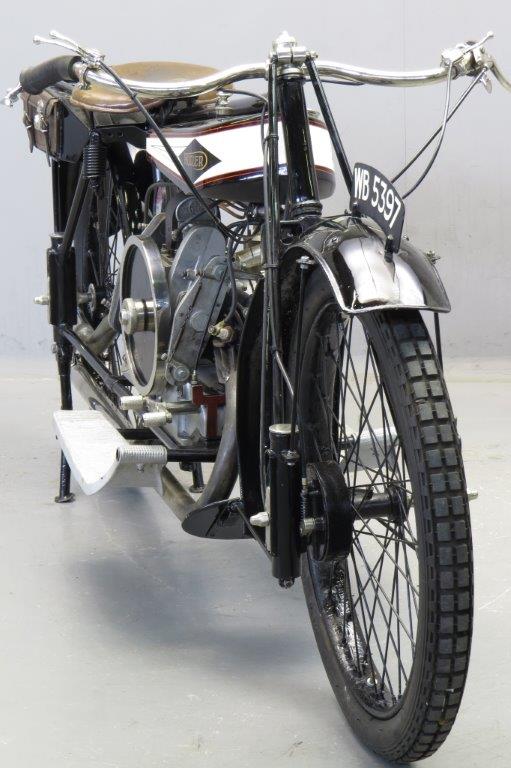 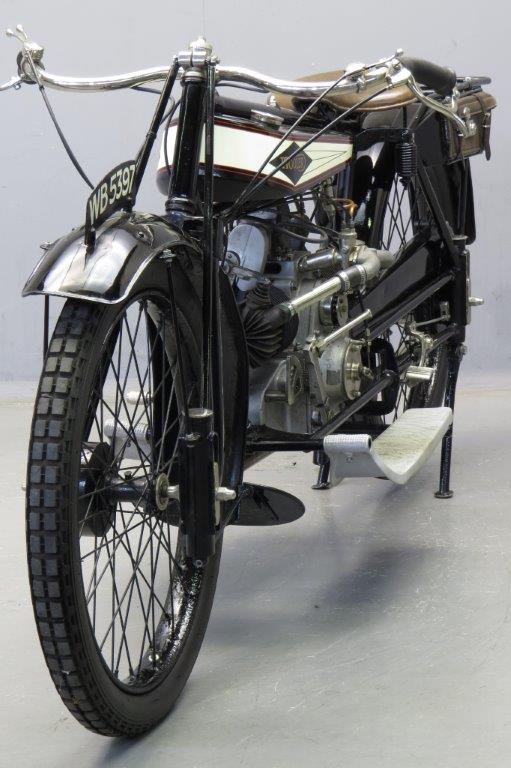 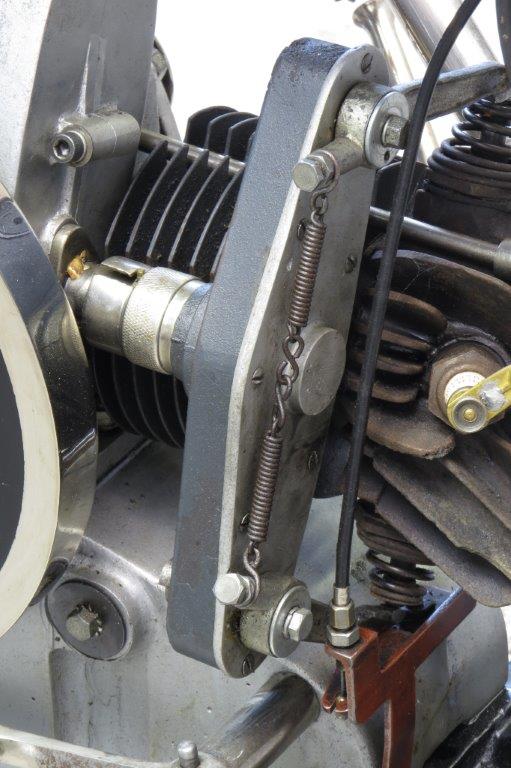 John Wooler was a designer with many brilliant ideas and all his creations were unconventional. His first product, unveiled at the 1911 Olympia Show, was a two stroke flat single with double ended piston and his last creation was nothing less than a transverse flat four, development of which began during the second world war.
This advanced design was shown in prototype form at the 1954 Earls Court Motorcycle Show, but it never really reached the production stage, probably due to high tooling costs.
During the Great War John Wooler had prepared a redesigned version of his first model: it was now equipped with a four stroke engine with IOE valve configuration, and was available to the public in April 1919.
This new design was bristling with unconventional and often very advanced engineering solutions.
It had  plunger suspension at both wheels and the oil was contained in a bolted-on sump below the crankcase and picked up by a chain that delivered the oil to the crankcase.
No old fashioned things like hand pumps on a Wooler! Another smart detail: a Wooler toolkit had only one spanner in it, because there were only two specific hexagon sizes on the machine, or so it was claimed.
The Wooler engine went overhead-valve in 1923 when a ‘semi-overhead cam’ arrangement was adopted.
The new engine was available in 350cc and 500 cc versions and was equipped with foot gear change.
John Wooler ventured to offer an alternative for ohv enthusiasts by trying to eliminate the problems there were with push rod engines: according to the designer the utilization of overhead cams on the new engines disposed of the difficulties of valve clearance adjustments to counteract cylinder expansion.
It also solved the problem of  annoyance from loss or seizure of push rods.
And, very practical, “valves are very easily accessible and are so arranged that they cannot fall into cylinder”.
Motorcycle production ceased a couple of years later, John Wooler preferring to concentrate on expanding the Packman & Poppe company that he had bought from Erling Poppe.
This ultra-rare and very late example of the pre-war Wooler was discovered in a garden in Hillsborough, Sheffield and subsequently restored.
A valve lifter, fitted to make starting easier, is the only notified deviation from factory specification.