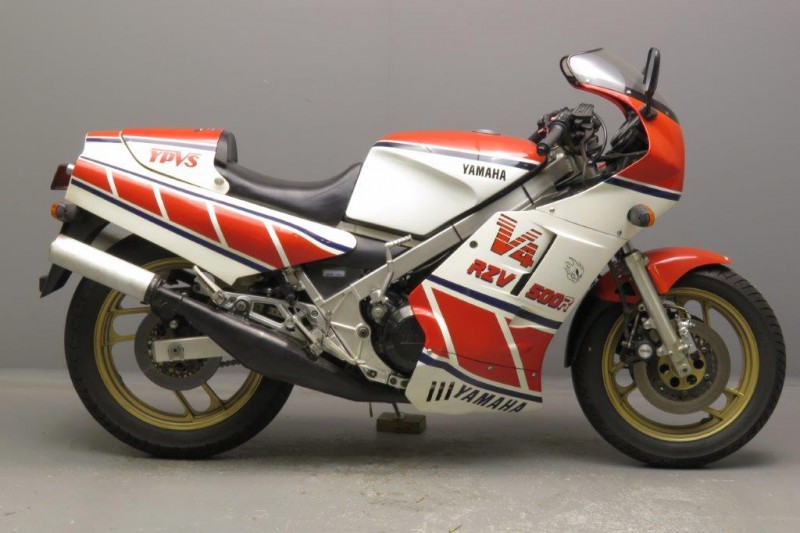 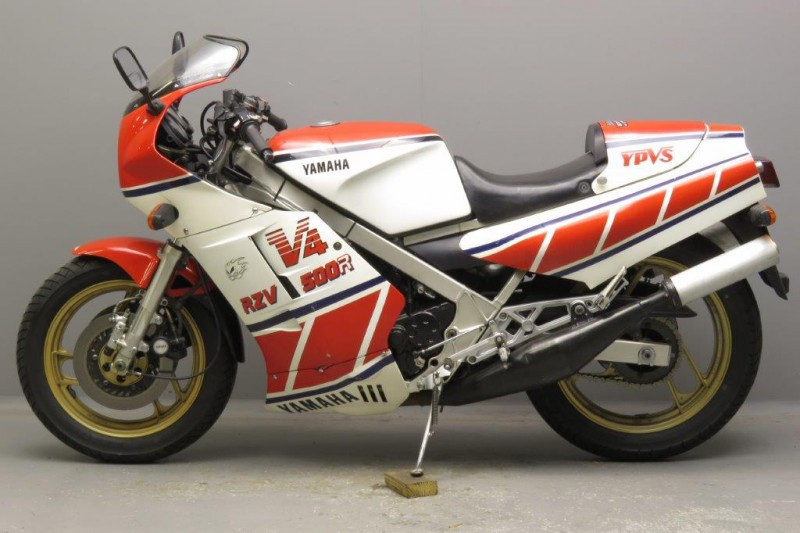 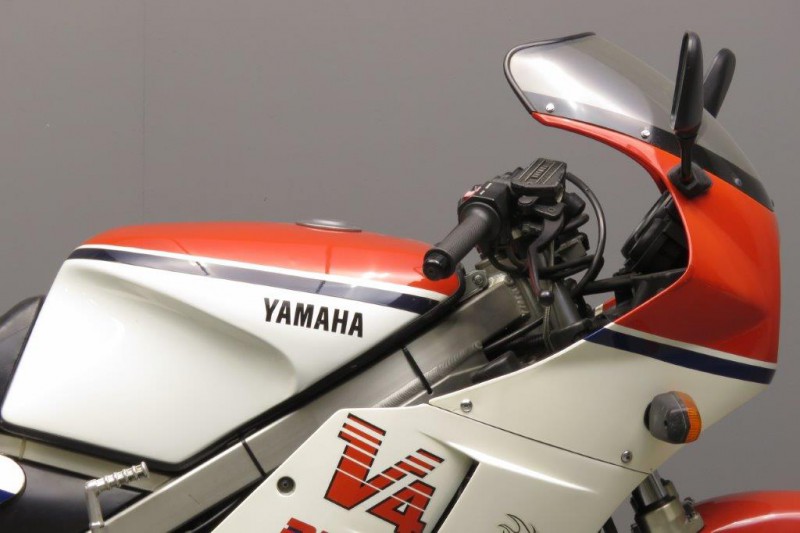 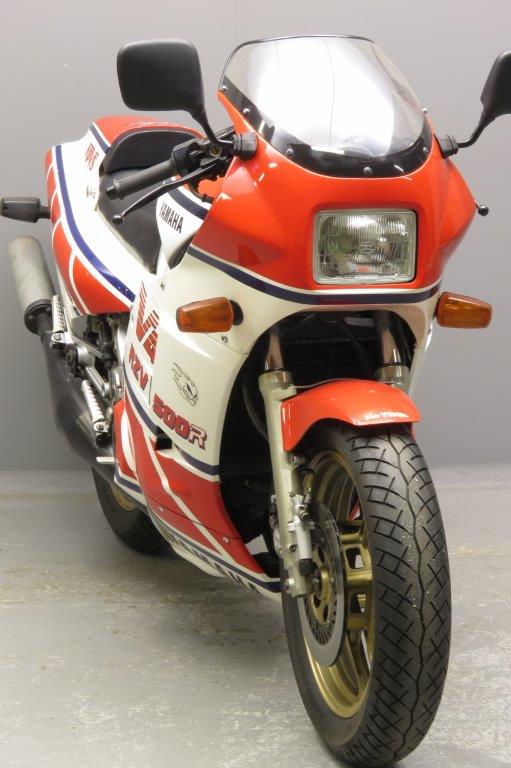 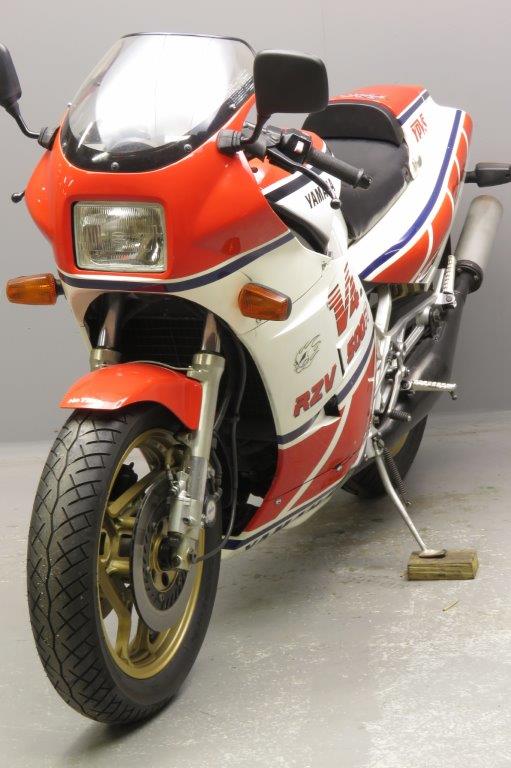 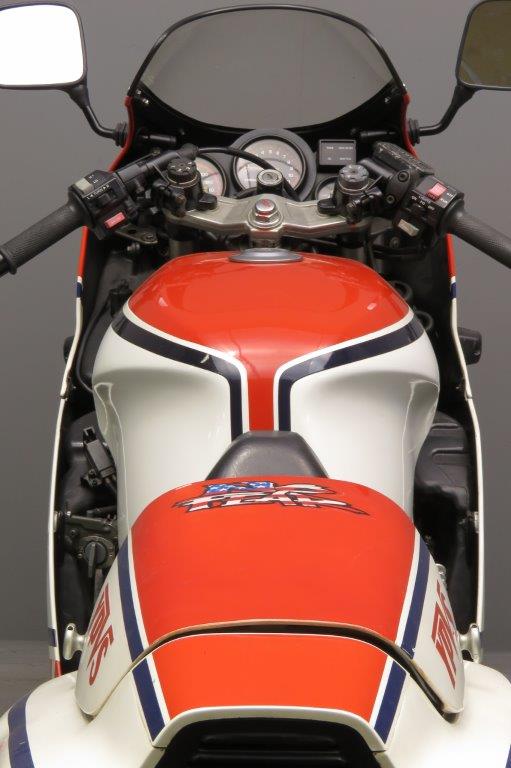 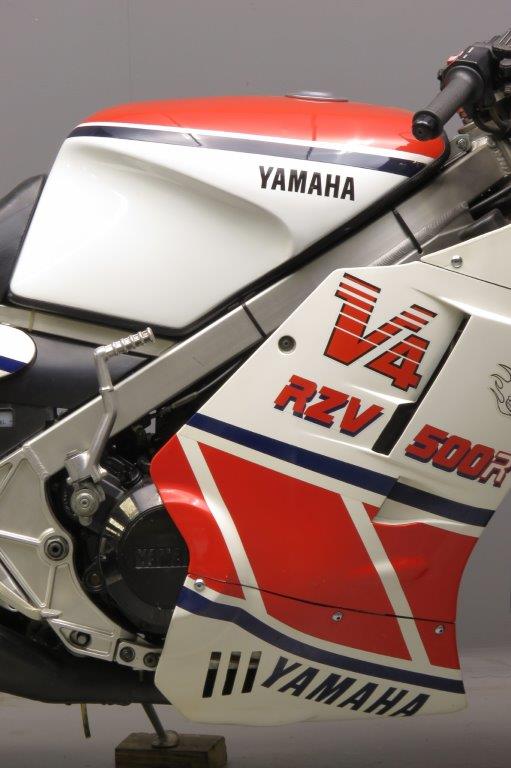 Introduced in 1984, the RD500LC was a street legal, road going version of Yamaha’s factory YZR500 competition motorcycle which at the time was leading the world championship with Kenny Roberts.
This wasn’t a motorcycle based upon a current production model intended for the road, but a fresh adaptation of a factory race machine, the closest thing to a Grand Prix motorcycle the average rider could get.
The 499cc V-4 two-stroke engine developed 88 bhp @ 9500 rpm in its tuned for the street form.
The liquid cooled engine was a 50° twin crankshaft V-4 with the dual crankshafts geared directly to the wet, multi-disc clutch.
With four 26mm Mikuni carburetors using reed valve induction, the carburetors were necessarily mounted at the sides of the cylinders but on 90° manifolds to reduce the width of the engine package.
The transmission was kick start only through a 6-speed close ratio gear set. Lubrication of the gears and outer crankshaft bearings was though a trochoid oil pump driven by a separate crankshaft. The chassis was formed by box section mild steel tubing and a full fairing cloaked the motorcycle.
Braking was afforded by state-of-the-art twin 267mm ventilated steel disc with a 2-piston caliper up front while a similar 245mm single disc did the duties in the back. Yamaha’s Monoshock handled the suspension in the rear of the motorcycle. Weighing in at 452 lbs., the Yamaha had a top speed of 148 mph.
Only produced a few short years from 1984 through 1986, the Yamaha RD500LC is rare and highly collectible.
Finished in white and red, this is an enticing motorcycle. (source: Bonhams)
This RD is in fine shape and goes like a bomb.
The odometer reads some 33.500 km and the engine has been reconditioned.