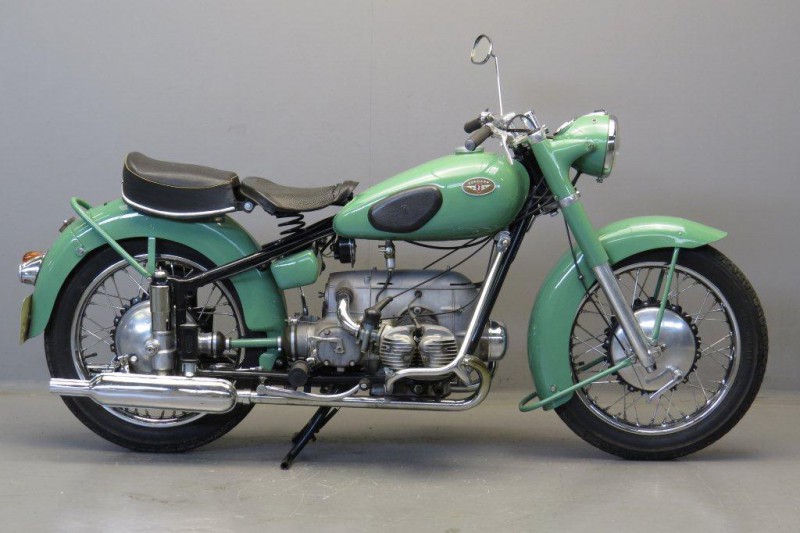 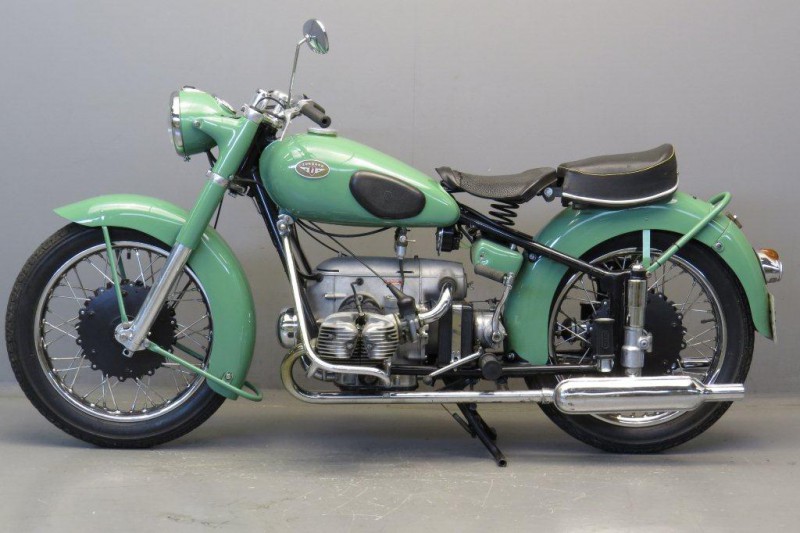 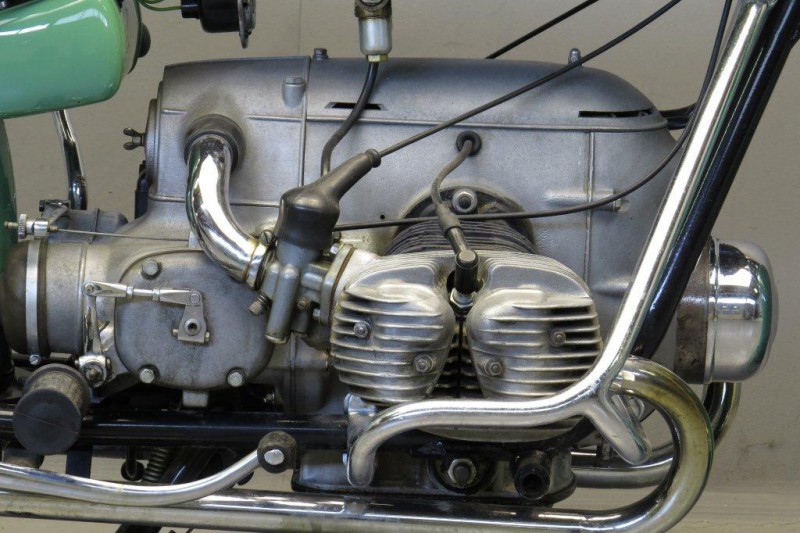 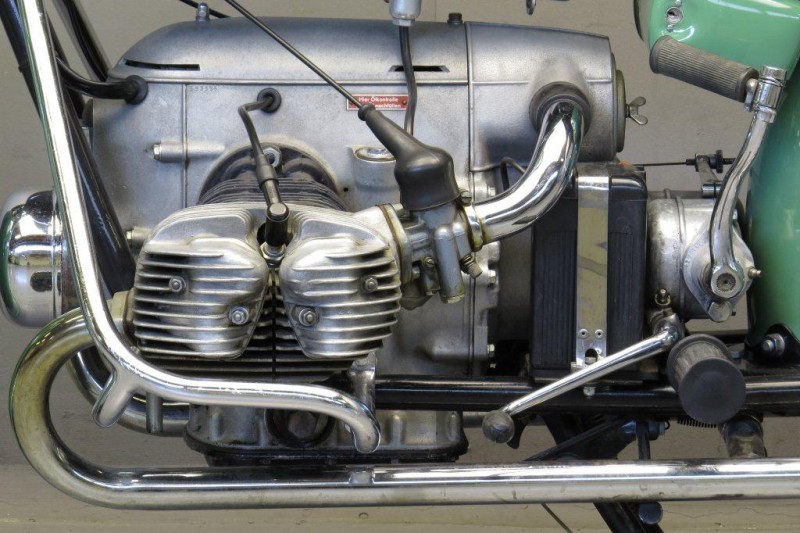 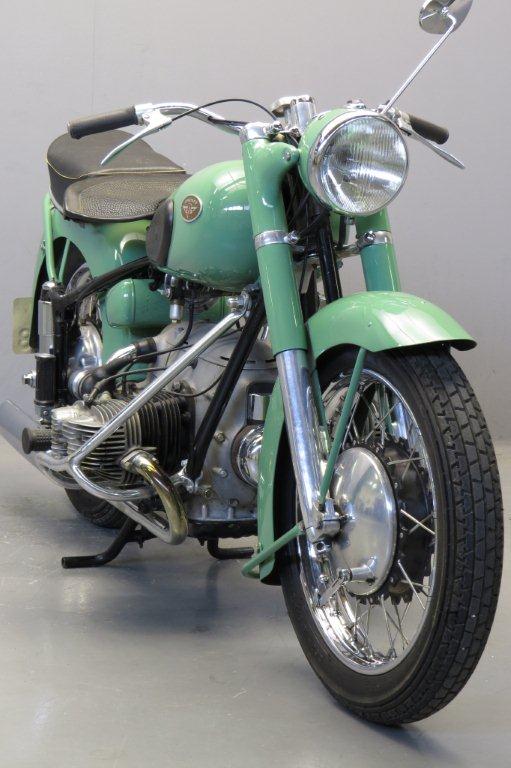 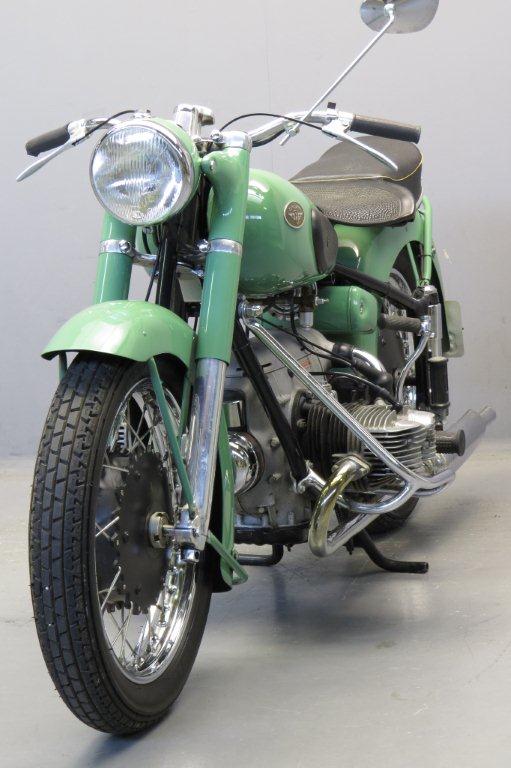 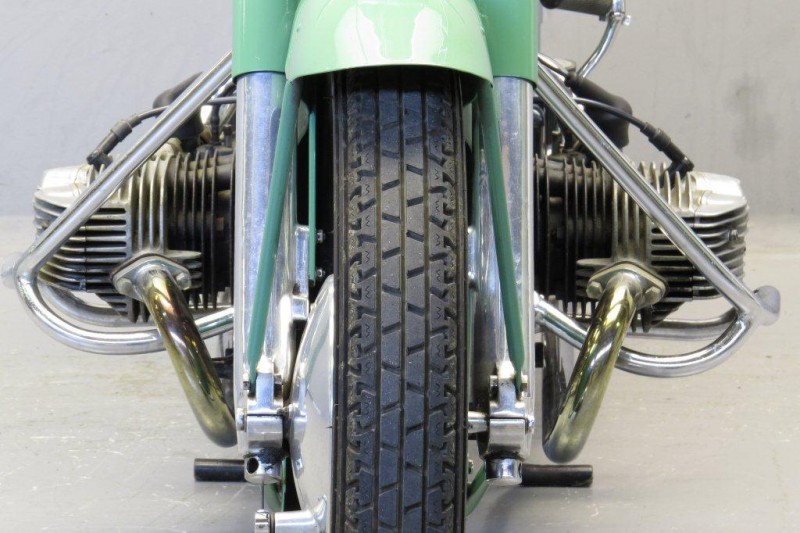 Zündapp,in motorcycle business since 1921, began around 1949 preliminary design work on an entirely new version of the KS model.
This new design had telescopic fork as opposed to the traditional Zündapp parallel four link fork, and plunger rear suspension as a major change, not to mention improvement, from no rear suspension at all. In late 1949 the first prototype emerged, painted black, with a beefed up chassis to handle the larger motor.
The larger motor lead to the introduction of the Zündapp KS 601.
In early 1950 a second prototype was completed.
With an engine that differed from the original KS600 in many respects the bike was christened the KS601.
To further distinguish it, not only from BMW but also prior Zündapps, the black frame now sported fenders, tool box, fuel tank, fork cover, and head light housing appointed in the famous Zundapp lime green.
The newly designed 592 cc motor, with two Bing carburetors, produced 28 Hp at 4700 Rpm with peak torque of 33.6 Ft. Lbs at 4000 Rpm.
This was notable power, more than the Volkswagens of the time, and made the Zündapp KS601 an immediate hit with enthusiasts.
The motorcycle's unique appearance and its new engine earned it the well known title of `Green Elephant`
Power was transmitted from the engine via a two disc dry clutch driving the peculiar but extremely smooth shifting and reliable duplex chain drive transmission, through a heavy flywheel.
The shaft then delivered power through a spiral bevel final drive pinion to the spiral bevel ring gear, the tapered final drive spline and, finally, the wheel hub.
Interestingly, the Zündapp KS601 wheels were designed to interchange front and rear. Both have the final drive spline in the hub to accommodate frequent rotation to distribute tire wear.
This newest Zündapp received enthusiastic reviews from the various motoring magazines of the time.
It proved to be popular not only with the motor sports crowd, but also with average owners who quickly came to appreciate its rugged dependability.
Zündapps being widely viewed as heavy duty sidecar machines.
Despite handling that was superior even to BMW's they just couldn't shake that reputation with the solo riders.
Also, the world economy was picking up and more people could afford to purchase cars, which had obvious and attractive advantages over motorcycles for practical day to day transportation.
Production of the KS601 in all its flavors from 1955 to 1958 failed to reach 1000 motorcycles.
Total production across all the years of its manufacturer just barely topped 5000.
In 1958, Zündapp sold the Nuremberg factory to Bosch and production of the Zündapp KS601 ceased.
In 1984, the Zündapp marque and all the equipment was sold to China.
In 1999, a German firm purchased the Zündapp name again.
It's encouraging that the marque is once again German owned.
Who knows? Maybe we'll be able to buy Zündapps once again…
This 1956 Zündapp KS 601 is a very well presented older restoration and a very strong runner.
She is ready for the summer or the famous German "Elephanten Treffen" in the winter.
Zündapp KS601, a legend on two wheels.
Description taken with kind permission from the website http://www.zundappks601.com/ZunKS601_2.htm